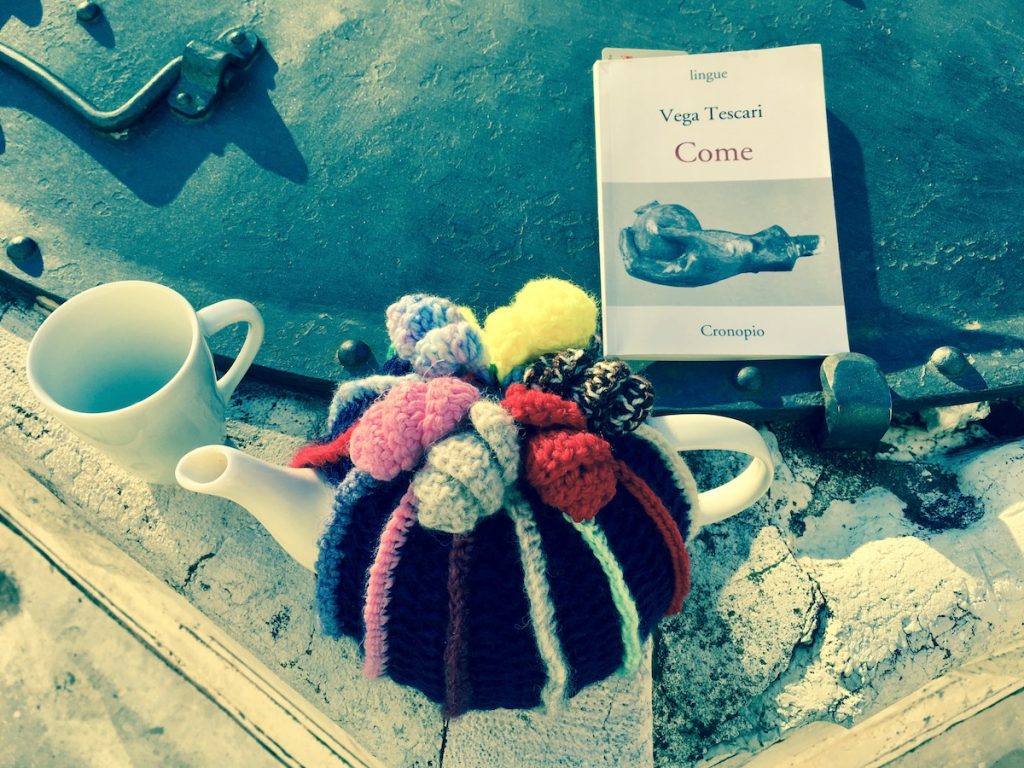 How could it be, How, if the author Ms Vega Tescari shifts among language, philosophy, art and architecture – as well as poetic translation – and if the publishing house, the Neapolitan Cronopio, is an unicum having new series of world narratives hand in hand with essays and texts of contemporary philosophy to compose – primus inter pares – all the same catalogs in?

In love with the act of storytelling – in this form, it is a-temporal and a-spatial – of the two main categories of philosophy (time and space, in fact), Tescari puts together a collection that consists of two parts (Voices, Echoes) for a total from 42 writings, sometimes – indeed above all – very short or short. Nobody names any protagonists except for personal pronouns rarely not implied by the verb; no city or place is noted; no journey from here to there contextualized in a customary form. As it is a pure concept of ‘what happens’, free from any clue of orchestrating reality.

The only dimension that could not escape the role of protagonist (involuntary) is that of the liminal garden or the wood – not only figurative elements of the forest of words reduced to the bone (which also concerns the titles, made maximum of one or two words).

It seems that Tescari – unlike any other writer – annihilates every biographical source taking care to shred in dense strips of paper all the details that lead to his person and to any narrative character. She seems to want to talk about herself only this cognitive and experiential element of a green space in the city or at its limit; to live on the edge of the green, of the natural where every rational element tends to suppress itself and to stand by the wonder of the crossing of the things that happen. That seems to be the role to which you devote the literary medium: first form to share the folds of being in the world – isolated in sentient moments – through the language used in a very original and pure rhapsodic form.

This is a book that, more than any other, we recommend to allocate to a specific bench of a park you love or a stone in the forest that you attend without effort. And there you will come back as if on a pilgrimage to read – by sizing them or else they will end too soon – the powerful visual stimuli that each story (or rather prose poetry) opens up.

As is also a book that we suggest to your foreign friends who love Italian (in addition to the more classic texts by Calvino and Pavese) to take a leap into the hands of an author who makes the first chisel of the language.

Travel with it every day up to that space identified by a thousand for this reading and you will not lose an instant of ‘radiant’ body to body with rarefied stories up to where the gesture, unmediated, meets spirituality and its humanity – tiny in gear of the outside that comes without a first and then almost in an absolute flow without Monday, Sunday, afternoon or dawn, summer or winter.

Never out of phase, Tescari identifies a measure of the story made of the cancellation not only of the biographical subject but of the same literary subject to which we have always been accustomed to thinking as the principle that is then told and merged not only with action but with a presence, a here and now in places of the mind.

‘Meanwhile, the sky, outside, had become closer, seemed to want to enter, but there was no room and had to stay to spy through the windows of the room. Suffocating open was the feeling that gave all the blue thrown in order scattered up and picked up by something that had never dropped it. We breathed well, inside; no openings were desired, no attempt was made to catch up with something beyond the four walls. Rather, with increasing strength, we tried to give a form and a structure to those things that were available, that were touched with one hand and against which one could lean, with all the weight, even while standing, without seeing . We did not try to imagine anything else, we did not even think there could be anything else. Serving the things that were there, finding them a place that belonged to this world; where they could fall with all their heaviness and roughness, even making noise, if necessary. ‘