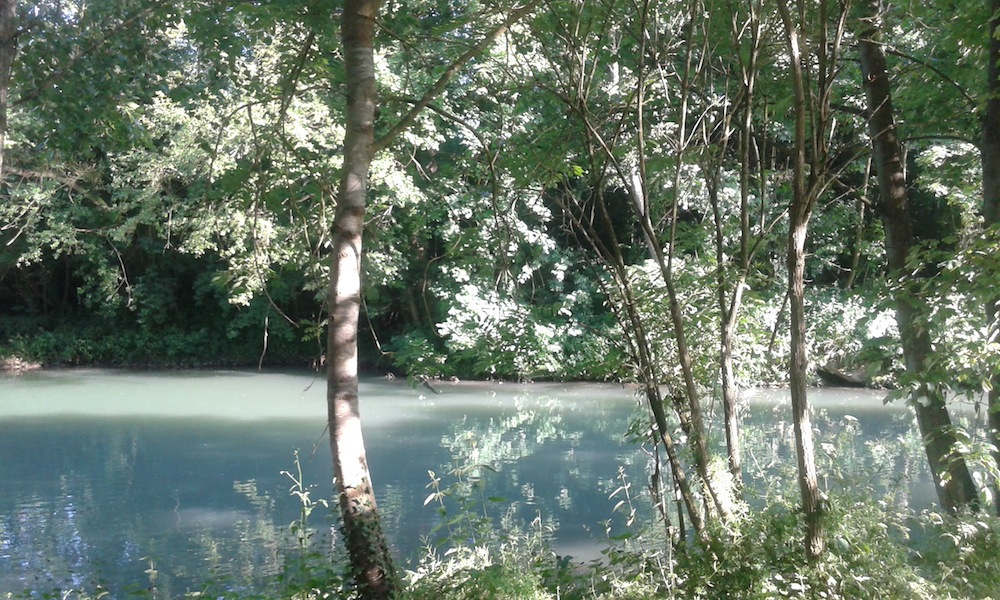 One fine June day I get on my bike and ride up the street to where a pedestrian bridge goes over the highway. While approaching the ramp, I check on the baby bur oak someone has planted there; stealth gardening by the same person, I guess, who has in previous years planted other young oaks in the parkway of this street bordering the expressway. Who does this? Where did they collect the acorns? Do they have access to a greenhouse or do something at home involving grow lights or a sunny windowsill? I may never know—the oaks just appear: one day plain grass, the next day baby oak, marked by a white ribbon, left alone by whoever mows, watered when needed.

My new job is a little more than five miles from home, and I’ve started biking regularly. This is an extension of an already established habit, so every morning I must make the decision again: today I’m going to put my lunch and other necessities in my backpack, sling it on, put on my helmet, roll my bike out of the hall and through the door, carry it down the steps, get on and go.

It’s been eight years since (regarding biking) I last found myself inhabiting this uncomfortable space between intention and action that new habits require we negotiate—at least the ones involving effort and will. I’ve always had a bike, I enjoy biking, so what could be easier than deciding that cycling or walking would be my main transportation around our community, with public transit if at all possible, for longer distances? On setting out to do this, I didn’t realize that I would have to keep re-making that same decision every single time I went somewhere. Instead of simply walking outside and getting in the car, I had to plan ahead—for extra time, for the weather, for clothing—and then overcome internal resistance. “Driving is so much easier,” the voice of old habit whispered. “Aren’t you too tired and in too much of a rush? It might rain. You’ll get hot (or cold). Come on, take the car.” Gradually, very gradually, the bike became my natural and preferred mode of transit; but this took much longer than one would expect.

I head over the bridge and ride a couple of quiet blocks to the first busy intersection, with its gas station, Jiffy Lube, cars, trucks, noise— so boring in its jarring ordinariness I can’t even call it to mind later on—I’ve blocked it out. If you are in a car, you maybe roll up the windows, put on the radio, turn on the air—you wouldn’t notice the smell, glare, noise; but on a bike these things hit you from all sides. In a car, you could be said, sometimes, to not be where you are.

Five miles is an interesting distance. Some people might go out for a five-mile run, or walk the same distance for exercise and proceed to boast about it. But it seems that our ideas about time and distance and necessity have gotten a little disjointed. Biking to work takes me about 35 minutes. Someone who commutes by car might say it takes only 30 or 40 minutes each way—perhaps a distance of 15 or 20 miles. Yet by bike, 30 to 40 minutes somehow seems, paradoxically, much longer, and the short distance, a matter of five or six miles, becomes a case for congratulation, that you would bike that far, especially to commute. Plenty of people go out and bike long distances on weekends for fun and recreation, but turn to their cars for getting to work, which seems backwards to me. If you have a car, why waste it on the tedious routine flow of commuting, especially if you have alternatives? Fossil fuels are precious, and a car is actually a great luxury. Why not use cars for weekend trips, or for hauling big loads? But then, living only five miles from work could also be considered a luxury.

Once across the street, I’m glad to be back under the trees, riding past houses, then west on a commercial strip with a slower pace, over the railroad tracks along which grasses are tossing and chicory lifts its many blue heads, on for maybe a half mile and then…a right turn to head north on the road by the river. Now I don’t get tied up by stoplights and cross-streets for a couple of miles; I can set a nice steady pace.

The road follows the curves of the river, all shadows and cool, oxygenated air, the shaggy, disheveled woods on the west faced by a row of fairly distinguished old houses with tightly landscaped yards. These woods I know well, since I help maintain them. I greet the trees, note the ash tree stumps cut to head off emerald ash borer, the may apple colonies, the grasses, the tree leaves’ deep green. I know that if I stop and walk my bike west on this path right here, I’ll come to a savanna, a place of old oaks set wide enough “to drive a wagon through,” as people said at one time, and then the river. On a morning like this, were you to sit on a big oak log in the filtered green light, you’d hear a downy woodpecker, a blue jay, the deep grumble of a blue heron, and in between you might notice how the breeze in the oaks sounds different from the maples lining a suburban lane. You’d notice the sweet Cicely with its tiny white flowers and Canada moonseed vine twining in the raspberries. You’d probably feel a pervasive atmosphere of what we sometimes call peace, though ecologically it’s something else. I’ve met people living within a few blocks who never go there—a little scary, they’ve said. You don’t know what could happen.

This is a perfect day for a ride and plenty of other cyclists are out enjoying the weather. Still, the season feels off kilter. So many plants never actually went dormant, so much bloomed early after the record-setting warm winter that the woods feel like late June. The leaves have the settled, high summer steadiness one expects mid-summer and beyond, but it’s two and a half weeks short of the summer solstice. What will happen, I wonder, later on? Will the trees stay in this high summer state extra weeks? Do temperature and light guarantee that they won’t try to shut down early, but simply keep on photosynthesizing until the season finally turns again in September? And beneath these questions, a minor, fretful refrain: when will it rain again?

An ecologist friend says that with all the extra CO2 we’ve been putting in the air, C3 grasses— for example cool-season species such as Kentucky blue grass, will out perform the C4 grasses, the ones we naturalists love, the tallgrass prairie denizens like big bluestem grass. But I don’t know where this leaves the oaks and maples. And what about corn, that pre-eminent C4 grass? My tomatoes, living brief explosive lives of only a season, present no such questions. I started them in April, put them out a couple of weeks ago, and on they go, up towards the sun, along with the chard, scallions, basil and parsley. It’s hard to argue against early tomatoes.

This is before the rains don’t come for weeks more, and still don’t come, before the hottest July 4th in a hundred years, before the air pollution action days, before farmers start plowing under the corn that has failed, before the fires and storms elsewhere, and before in the media, the words “heat” and “drought” begin to be accompanied by the words “climate change,“ at least once in awhile.

I cycle on, this beautiful morning, pass under a viaduct and enter a very prosperous stretch, broad lawns cradling large houses lined up like galleons in port. The residents aren’t home at this hour when the lawn service trucks and trailers line up like tender boats, or like some road show with smelly, loud leaf blowers and mowers instead of elephants. I ride on steadily and soon come to another stretch of woods and smaller houses, where all is quiet and sun-dappled once more, until I hit the busy thoroughfare and must get on the sidewalk in order to cross with the light.

This is before I learn that riding in 100 degree heat isn’t too bad, before our power goes off and I’m glad we’ve got freezer packs in the freezer and a charged-up solar lantern, and before I start watering the nepeta and bee balm so they’ll bloom for the bees that rely on them for food.

On the narrow path across the bridge, I’m careful, watching for pedestrians—the street is much too busy to ride in safely, though I occasionally see some guy in gaudy spandex taking the risk. I look to my left and get off the bike to look over the railing and greet the river. It’s a bit low—rocks previously submerged now show bare faces to the sun, but the water gurgles along, ripples around snags, and all seems well.

This is before the river falls lower than I’ve ever seen it, and every time I cross the bridge more rocks, mud, and gravel are drying in the sun, before the clay banks develop cracks and fissures. Yet a hundred or more years ago, before it channelized, before the culverts all along its length started funneling in stormwater with no place else to go, this river sometimes averaged only 5” deep in summer as it meandered through the prairie, bordered with rushes, cattails, wetland grasses and who knows what else.

Once across, it’s back under the trees again, where at one time west winds drove great fires through the prairie towards the river. But the bike path stops at the Menards. Then I must ride across the grass, get off the bike to go over the curb into the parking lot, ride to the barrier at the edge of that property, get off, get over the barrier, ride through the McDonalds parking lot to where a sidewalk starts and go to the corner. Here, in the heat island formed by the noise, glare, busyness—and danger—of a six-lane intersection, I can tell the temperature is at least five degrees warmer.

That intersection is one excuse some co-workers give for not biking to work, even though crossing lights have recently been installed that make getting through much easier, though still not safe. I push the button, wait the long minutes, cross, repeat at the next light, then wheel along the new sidewalk, through the Costco parking lot and onto the campus. Now I breathe easy again, cruise to my building, get off and lock up the bike alongside ten or twelve others. One more journey accomplished without a car. I feel good.