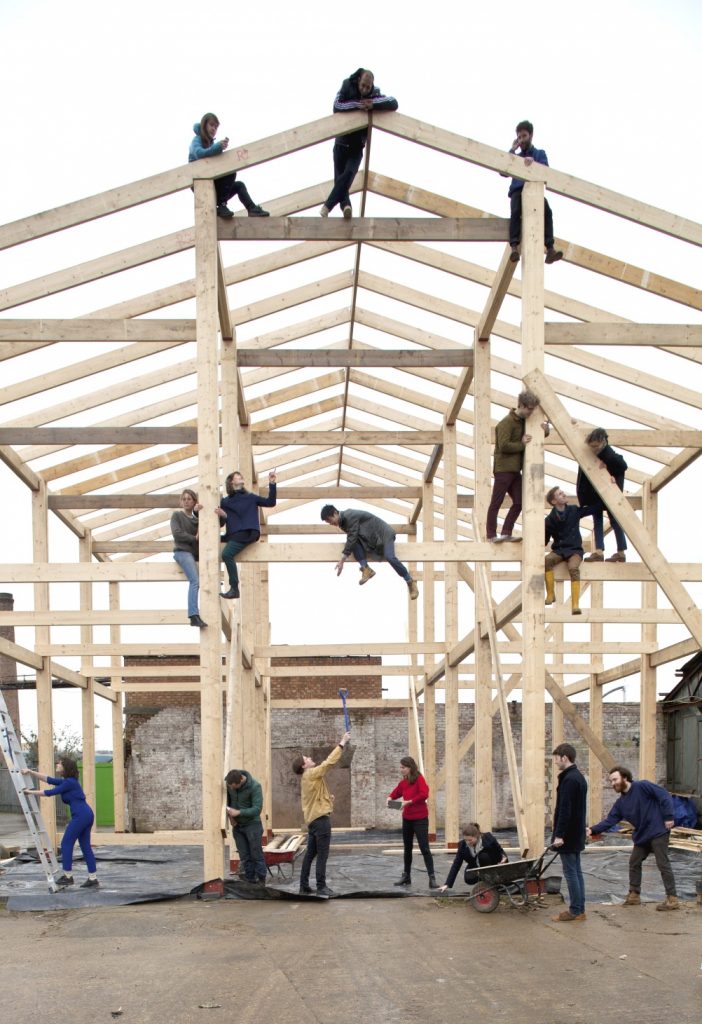 Wise and fair editors and publishers normally declare their endorsements when it comes to politics and parties.

I do declare my full admiration for you, Assemble Studio, and I feel there is a need to declare this endorsement also on a literary and non profit fanzine because what you do is not only architecture, furniture and a specific landscape. It’s very political when it shapes (and carve) a certain idea of citizenship.

You established yourself in 2010 and got incredibly noted on 2015 when you won, unexpectedly, the Turner Prize first of all by being architects by trade and second by being a group and not an individual.

What brought you to form Assemble and what happened in your agenda between 2010 and 2015 letting you feel you’re running your path exactly as you wished and try to match your more desired aims (and dreams) for a better world?

We formed Assemble in order to undertake a built project, the Cineroleum, in central London in 2010. We were provoked by a collective desire to build together, in contrast to our day-to-day experiences of working in London-based Architecture practices drafting details and toilet layouts. This collective desire, 8 years later is still a fundamental core to our practice and has continued to shape the relationships we have with each other and the work we make together. From our studio buildings, Sugarhouse Studios, a community of studios arranged around shared resources, to open-access workshops like Blackhorse Workshop in Walthamstow.

Liverpool is, having worked there quite a bit in 2008 and 2009, one of the very few places in the kingdom where you can foresee the ‘battleground’ for a better future UK: if you loose there, you loose everywhere. As to be better said, Liverpool has the seeds of the future of the nation, it can be dried out or rightly planted.

Is that the reason for which you had chosen some landmarks of urban resistance (Toxteth, Granby etc) to act as activators or ‘urban developers pro-bono’ in order to resist to the quangos plans for it? Or just a coincidence?

It is, to some extent coincidence that we ended up working in Liverpool. But also it is no coincidence that history of radical action and alternative politics was manifest in the projects we undertook there. This is because, far from being our projects, they were the projects of the Granby Four Streets Community Land Trust, a collective form of land ownership established by residents and activists in Toxteth. We were lucky enough to meet them, and were able to help them realise some of their ambitions in the refurbishment of terraced housing, the opening of communal resources (like the Granby Winter Garden – due to open at the end of the year), and continue to work with them in developing and realising the ongoing project that is the Granby Four Streets. A wonderful, and extraordinary place, that they have worked long and hard to preserve and cherish.

What is next? Rewording architecture and furniture design is a bit tight for you, I guess. Are you already inventing a new kind of approach to interior and urban design? A sort of Assemble after Assemble?

Our projects continue to cover a range of type and approaches: from textile institutions for the youth of New Orleans to exhibitions on our relationship to medicine, in which we occupy positions from developer through builder to designer. Assemble is an ongoing project, which we are constantly shaping and reshaping.

I wish to focus on your liberty into ‘originating’ and mixing materials, by taking for instance your study on the tiles in Granby Workshop as well the ideas applied for the Baths at Goldsmith College: in your way of making, any project becomes bespoke and nurture itself from the genius loci of the real place in which it is.

Is your team having members each of them devoted to a specific research line or method once you issue the proposal?

All of our projects are strongly and strictly specific: heavily inter-related to their context through our material, programmatic and formal decisions. We often use the hand-made, or the skillfully crafted, whether by us or by collaborators, in order to enrich projects that otherwise exist within constrained contexts and budgets. These material enhancements are sometimes individually developed, sometimes collectively developed, and now having setting up a commercial architectural ceramics workshop (Granby Workshop) sometimes developed in and by the Workshop.

Coming to commissioners and clients: I guess that anyone thinking to design something with Assemble knows what to gain and what to do not ask for: is that interpretation correct?

Which is your preferred direction in order to explore further stances with commissioners or clients, for instance can be an unsolicited proposal the first step?

Often we are approached by clients or commissioners quite unsure of what the result of our collaboration will be. In part, this is due to the specificity of our approach, which varies so much from project to project. Some projects will begin as a conversation, speculation or chance discovery in our office, otherwise will begin with a collaboration, an unsolicited proposal, or an invitation from a prospective client.

If Assemble can be a book and a piece of music….What those could be?

Assemble in the next 6 months will continue to be inclusive, international and inter-dependent, looking to people both within Britain and outside of it for collaborations, cooperation and collective experience.

Last but not least: who is actually Assemble? Can you list yourselves and your place of birth and age?