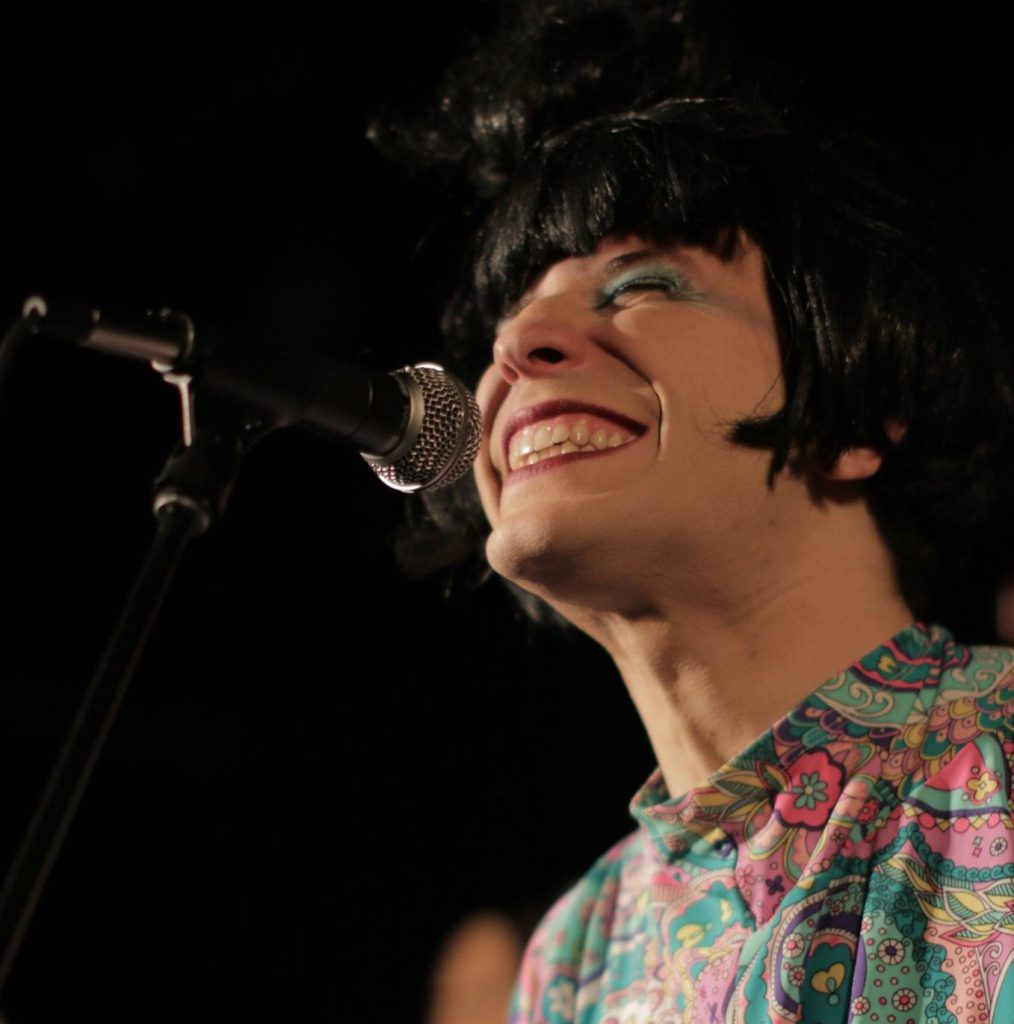 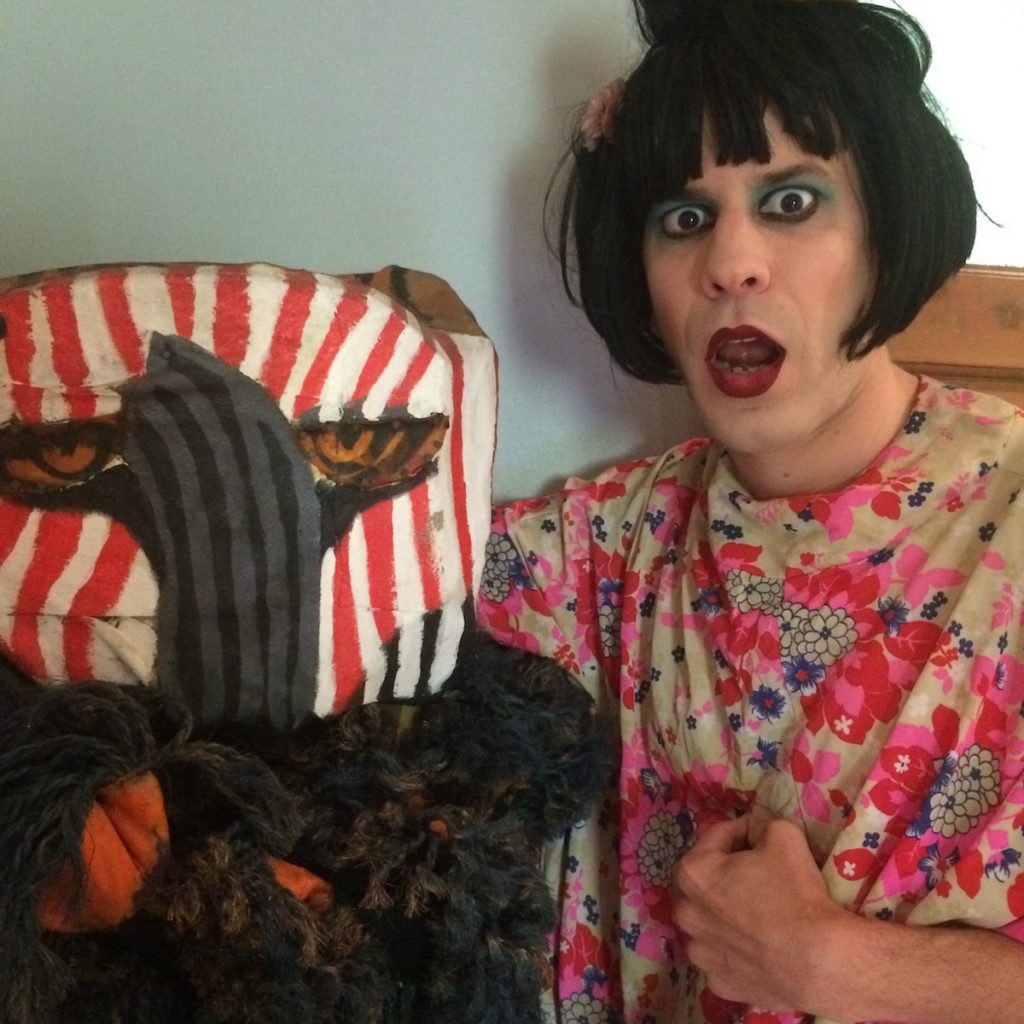 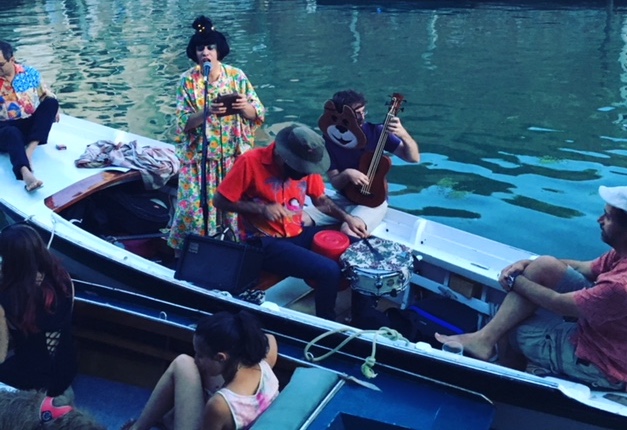 My life was green shadows and helping old ladies carry their bags from the supermarket. It was dancing on shoes and chewing on pencils. It was storytelling and kalimbas on a mountain in my brain on the island of Puerto Rico. I was a happy child.

Later the leaves died and the sun became white and bounced off of everything. All the pain around me became too clear and my brain got darker. I lived many years in this darkness. Crawling blindly around the world in search of the green shadows. And then one day, pink clouds washed over the white sun and instead of green, I got pink shadows, and this has been a new kind of joy.

And your life afterwards?

Everything came together quite magically with Pinc Louds. I met Rai and Ofer Bear at a Day of the Dead party just as these pink clouds were starting to form. The girl who threw the party gave me a beautiful pink dress and everything came into place. My luck is beyond belief. I started playing in the subway stations and have been able to make a living this way while also promoting the band and our shows. Then humans started coming to our shows. And from here, many of these amazing humans started to join the group, like the puppeteers (Jamie McGann, Madison Berg, Kevin Pérez and Jamie Emerson), MTA Pedro (our favorite dancing, percussing and singing MTA worker), Marc Mosteirin (the greatest keyboard-playing surgeon ever) and dozens of other people who have helped us, just for the love of love…

You’re the author of the lyrics of your super indie band and your outfits are always very detailed and shaped for the atmosphere of the concert.

The sonic choice of Pinc Louds is super original. It shifts very much (and surfs) among many genres. From a super synthetic melodic ballade added by the kinda of Nina Simone’s jazz, the pure sounds of certain soft metal or rock or even the most cultivated country if I can hazard…but I think many other fans read even more sonorities.

You also use an uncanny ‘method’ to mix falsetto and gender diversity (you chant, that is the case to say more than singing, either with a feminine and masculine voice). Which was your inspiration?

Where is the right placement of your live music? A stunning sunset on a third world scenario by dispensing music from a track, the last Red Bull Music Academy showcases, the refined party of a fashion brand in NYC, anything and forever L line subway stops? I ask this because you’re a performer and not just a singer and audience may seem super important for you…

My inspirations are like dreams: they are rooted in real places (Chordettes, Gene Austin, Bobby Capó, Ismael Rivera, Violent Femmes, Billie Holiday…) but in the dreamlike state they get distorted and the watercolors blend into each other and I don’t really have any control over it. It just happens. I feel a certain way and the music comes out, drenched in bits of one-way mirrors that sing and shout but don’t see what they are reflecting.

I hope our music fits anywhere. I really enjoy new settings. We’ve played in fancy cocktail bars and dirty subway stations, an office in midtown Manhattan, a tiny dumpling shop in Chinatown, and just recently on a little boat navigating the canals of Venice (with amplified sound and everything!). I think it’s important for there to be art and music in unconventional spaces. The world needs more love, more raw feeling, more realness. And this needs to be available for everyone. If the only way to get that is by being part of an elite that knows where to find (and pay for) art, then we’re screwed.

Artists need people to witness their creations. The streets are full of people. What else can I say?

I wanted to ask you something about US overwhelming racism and the lately hard life in NYC but I might think this question will derail us from artistic discourses: I noted that in your lyrics politics and major disasters are never entering so much…

I would say that everything is political. Not wanting to include “politics” in one’s art is a political act. Playing on the street (many times illegally) is a political act. I do not like talking about specific people or countries or disasters in my songs because I don’t feel it is necessary in order to get a point across. I don’t like how it sounds in general when songs are too topical. I find that a bit limiting to the listener’s imagination and even condescending at times.

The day after Trump won, I went out to play in the subway. I felt a little bit awkward because, as you said, my songs are not “political” and I felt the world needed a politically-minded artist to help rally them into a protest or at least get them through the shock of what had just happened… I decided to put up a sign that said “we are still alive” and played the same music I always play. That’s the best I can do. Remind people (and myself) that as long as there’s still breath in our bodies, we can do our best to be happy and help make this world what we want it to be.

Which is the music (not yours) you are listening to now and the book(s) in your hands?

I was lucky enough to play an acoustic show with a band called Ava Rocha recently. They’re from Brazil and they’re wonderful in so many different ways. Their music is beautifully intricate and rhythmic and powerful. The songs are theatrical in a less obvious way than, let’s say, Os Mutantes (whom I love) but very visual and aquatic and sweaty and full of life.

I’m currently reading Cosmicomics by Italo Calvino and Sapiens by Yuval Noah Harari. Both deal, in very different ways, with the origin of our universe and our species. The first story in Cosmicomics has to be one of the most beautiful fourteen pages ever written.

Well, I just got back from Italy and haven’t been able to get over my new addiction to Aperol spritz, so let’s go with that. A cold soursop milkshake is also a magical thing to behold.

I would love to be a barker in Coney Island. These are the people who say “Step tight up ladies and gentlemen! Come see the strongest mouse in the world lift a full size human baby!”

What did you learn, so far, from life?

I recently learned that if you’re going to take a Benadryl in order to sleep on an airplane, wait to get on the airplane first. I made the mistake of taking my Benadryl while still waiting in the airport and then found out the flight was delayed six hours. Somehow, I was able to crawl my way onto the plane and into my seat, but it was not a pretty sight.

To discover more about Pinc Louds and to listen to and buy their music: