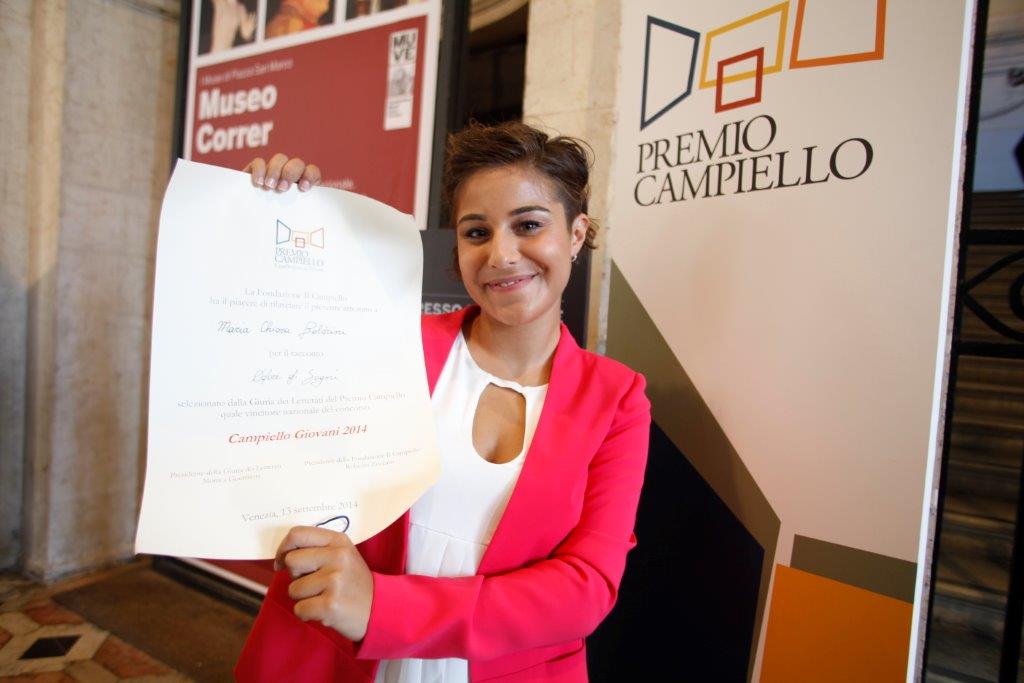 Your story in 10 lines: even though your only 17 years old, you must have your own story!

I just turned eighteen!! My story, for now, is quite simple. My mother is a teacher; dad is an official at the municipality of Pisa, a beautiful sister almost sixteen (alas much taller than me) and an adorable little brother. I was born in Pontedera and live in Capannoli. At age four, mum and dad and “Checca” and I relocate to Bientina, where the maternal grandparents live. At 10 Pierpaolo , my beautiful and sweet scoundrel, was born. I can still remember when the echography told us it would be a little boy. From my early age it was clear that mathematics would never be my profession, so I got into short stories and poems. I attended school in Bientina and at present the secondary language school in Pontedera. I study Spanish, English and French and in the summer from the age of twelve I abandon my folks (thanks to them!) for several weeks to travel around a bit, especially in Spain. That’s pretty much it, nothing much… flute, scout, b2 Spanish course.

What sort of meetings do you have during your days and what’s the story of your short story?

My encounters, given the age, are mostly dependent on school or summer experiences. My short story (Odore di Sogni, the winning short story of the Campiello Giovani 2014 international literary prize, editor’s note) was born from the desire to talk about the emotions and feelings of several Saharawi youngsters I had met during a volunteering period that was offered to us by my high school. My task was to help more accomplished volunteers than myself in welcoming a group of Sahrawi children arriving in Italy especially for some health examinations. By doing this I obviously met many young people, who during their life’s journey had been received in Italy precisely as a result of particular health issues. Inspired by their stories, and in particular by the story of a woman who at only 17 years old chose Italy as her homeland, I “depicted” my protagonist. I didn’t want it to just be a story on immigration: it had to be a story that talked about a community – the Saharawi one– pretty much quasi abandoned by the world, and a story that talked about a woman’s experience. As often mentioned before, my aim, as an Italian girl on the verge of making her own “choices in life”, was to tell about the brave “choices in life” made by an African, Saharawi Muslim girl.

It sends me to school! And however small is the country I live in, it gives me incentives for growing, maturing, arouses my curiosity, helps me find my way! It certainly could do more for young people but I’m not complaining, after all it’s also up to us young people to know how to go and look for opportunities and stimuli for growing. I think of myself as a very fortunate young woman, my life up to now has gone forward in full sail; all experiences are fundamental wedgesto build up the person that I want to be.

Besides being myself? Volunteering when I can, especially in Church activities. I’d like as soon as possible to become a blood donor and hope to contribute better in the future with whatever I will be capable of doing more.

A beautiful thing that has happened to you recently, besides winning the Campiello Giovani?

Frankly the Campiello prize, at the moment, overshadows all the rest making everything else a blurred and dim memory. The work-study experience in England last summer was particularly fun and educational, also because it was the first trip I’ve done completely on my own, as an adult, living responsibly my independence.

The KITCHEN in general is a passion. Either being in it decorating multi layered cupcakes or else by the door with a fork in hand waiting to steal the first mouthful of carbonara.

The music or a book that accompanies you

A talent you have, one you’re missing.

A talent, I think I’ve realized, writing. One I’m missing… besides not being able to read all that is mathematic-scientific? Uhm, there must be many. The first that comes to mind, I talk too much but perhaps my biggest talent and simultaneously failed talent is my franknessand audaciousinsolence.  It’s not much about courage or spontaneity; it’s rather that I’m not able to not say what I think and to show what I’m like. At times it can do good, other times it’s an ability I should learn a bit to “contain”.

How do you manage to live a ‘slow life’?

I have no ways because I don’t live slowly. In fact, I’m very slug, perhaps precisely for this reason, I live agitatedly. I write lists, place post-it everywhere which I then obviously loose. I have since forever this great capacity to occupy every single moment of the day! And then if I really have a free moment… I eat.

That remorse is better than regret. It has to be lived, all, until the end, more than can do. This is why I write.