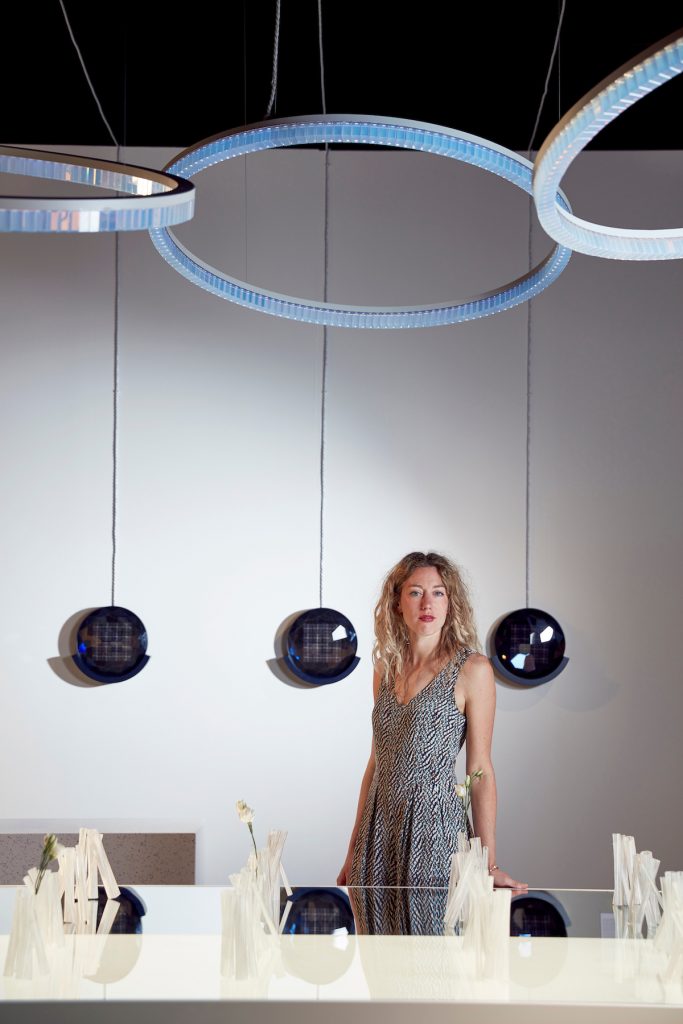 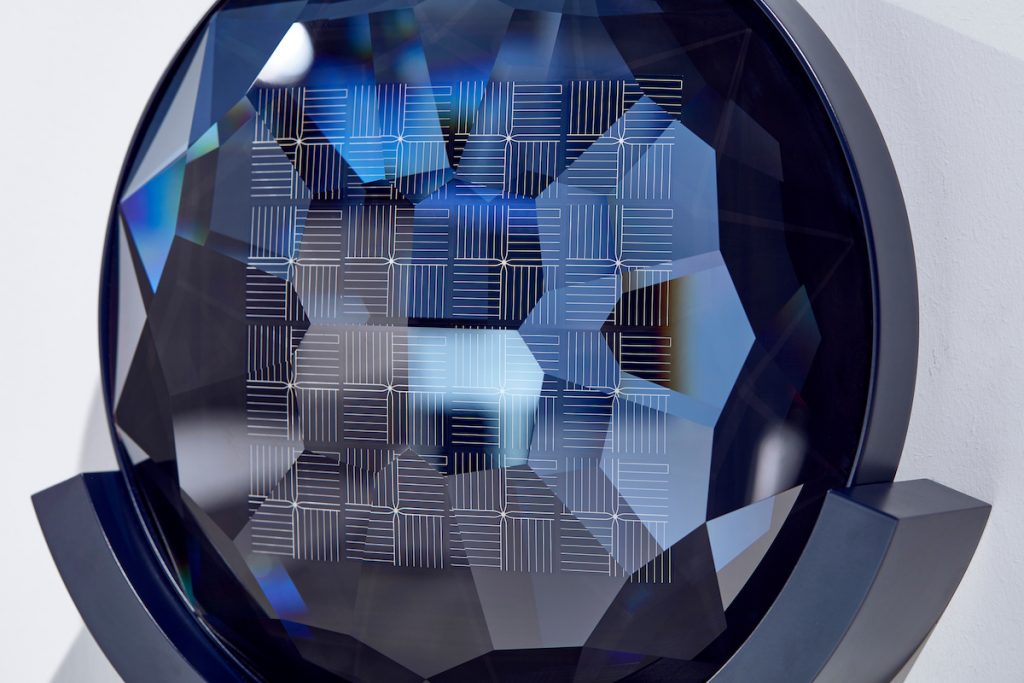 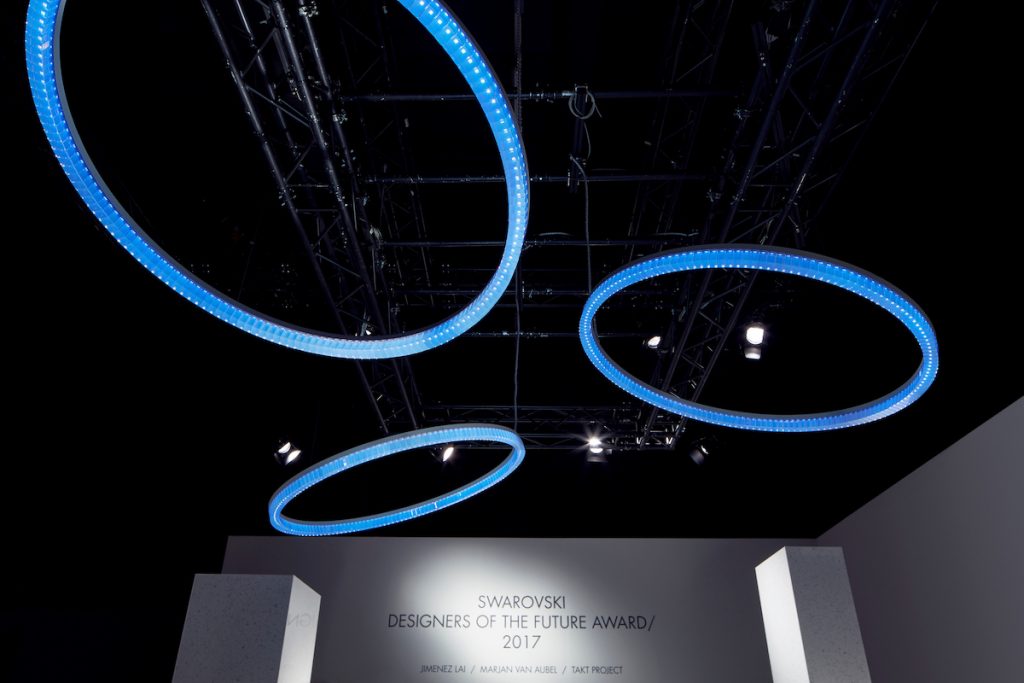 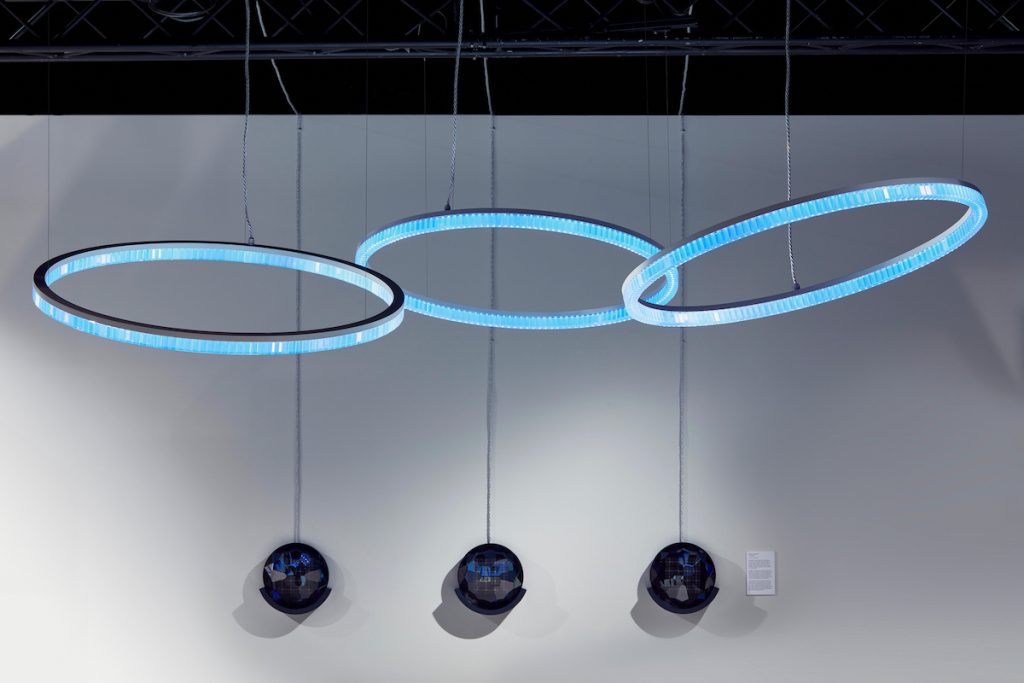 The Donald (Mr Trump, the billionaire who is the current president of the United States) few days ago declared the US official withdrawal from a set of agreements under the name of Paris Climate Agreement and pushed the bar adrift to again bet on fossil energies while US (and the entire world) was working to make the planet a better and more sustainable place to be by using renewable energies. Like the sun where huge steps have been undertaken with a choral work in many sectors, from physics to design.

We meet today Marjan van Aubel because she works in a very singular way – by fostering a totally new pace for design and, in a certain way, she brings it to a nobler stage. We think she also heavily contributes to make the world a better place to be.

As a designer, she concentrates only on materials and objects.

She is a graduate of the Royal College of Art Design Products and the Rietveld
Academy DesignLAB. At the heart of her collection there is a series of
innovative materials, from foam porcelain to integrated solar cells based on the
properties of colour.

She is one of the three recipients of 2017 Swarovski Designer of the Future Award (the other two are Jimenez Lai who recycles crystals in the form of terrazzo tiles and TAKT PROJECT who is able to make 3D printings with crystals).

The last place where you may think to find such a ‘people-to-people’ set of projects is a collectible design fair happening twice a year in Switzerland and in Miami (Design Miami/Basel): there has been, indeed, premiered her ‘Cyanometer’. It is a very poetic yet highly technological set of 3 lights whose colour changes accordingly to the gradient of the sky in the day (the Cyanometer has been invented in 1789 and used to measure the intensity of the colour of the sky).

Sunlight is harnessed throughout the day through a portable crystal solar cell that the user carries with them during their everyday activities. The crystal solar cell collects and stores the energy, and is then used to power the light sources in the home.

The cell is comprised of a solar cell integrated within a crystal – the crystal helps to collect and direct light into the cell, enhancing the capabilities and efficiency of the solar cell technology.

Taking original colour measurements, Marjan replicates the colours with Swarovski opal crystal together with LED technology, mirroring the changing colours of the sky and bringing the natural world into your home. At this stage ‘still’ potentially because the lights have been on show in June 2017 as first prototypes and we might hope that they are maybe going into production soon.

We had, so, a conversation under the three blue lights, which were absolutely amazingly recalling the sky indoor. Yet more amazing because they were not using a single watt of fossil electricity…

Born in the south of Netherlands (Bergen op Zoom), I studied design in Amsterdam and then enrolled in a master in London. And three weeks ago I moved to Amsterdam back.

Why? Nostalgia? Or something more…

I do not know, I like Europe too much and sometimes you need a change in your life. Change is good.

Your studies were a mix between design, science and technology

I studied really only design, then I self-learned the rest by myself. I got some physics courses at university and I got really intrigued by, also for my familiar background.

I love the idea that you make of sun the best alley and friend, or the second ‘skin’ we should have, and it happens since your earlier projects where you made possible to anyone to use solar energy indoor without having big panels on the roof and just ‘wrapping’ surfaces like tables and windows with a special skin.

It’s something as well as natural as crucial that is incredible nobody thought to that before. You conjugated design and advanced technologies on solar energy. Beside the inspiration you could have had by your family interests, which has been your inner spark to work with sun as designer?

It is vital, it is a source of energy: it is everything.

It started when I read that the sunlight striking the earth’s surface in just one hour delivers enough energy to power the world economy for one year. It’s from there that I understood I wanted to work only with solar energy because there is so much potential in there for mankind than anywhere else.

The more I dealt in designing solar panels, the more I got the endless possibilities in this sector. We do not use them enough and it is now the time to start to think about this. People in the design field have to help to switch on this philosophy.

Also many visual artists are going in the same direction, I have in mind recent projects by Olafur Eliasson for instance.

The portability of sun is something so great that intrigues many fabulous minds around this planet. Like you. You went a bit further working not only on portability and wireless, but also on surfaces and skins…Which was the encounter with a company like Swarovski, that opened up to you the results reached by its scientists working in many of the group divisions (the company does not produce only crystals, jewels and lighting but also lens for civil and military uses)? Did you find there the pack of skills you’re finally needing to advance on your ‘crusade’ for ‘energy for anyone’?

Yes. They’ve a massive team of engineers and designers able to calculate how the light is bending and, so, to use the properties of crystals to enhance the ones of a solar panel which becomes in this way much more efficient and working better. That was amazing!

It is amazing, but it is also very poetic. You could choose many applications but you ended in this project which is highly emotional…Is that because you’re inspired by something in particular and because you’re very romantic?

It could seem, but I was always fascinated by the way sky kept on changing and the little tiny crystals tell how sky works, actually from an angle is blue and from the other is red. In this I recognized how physic works and that this story must be told. And we were also able to go deeper and deeper in it.

Where did you find a cyanometer for the first time in your life?

I think I was writing a dissertation about colours, lights and how they work.

My version is bit more modern: basically the solar panels are collecting the light and can show how light the sky is. They’re reflecting the weather of the day and the rounded shape of the lamps helps to see this variation, from the very red of sunrise to the deep blue of twilight.

The crystals indeed augment a lot the quantity of light the panels can take, so you can presume with your modern cyanometer to have always enough power to have your sky living lights switched on….

Yes. The efficiency of the panel is 8% more thanks to the facetted direction of the crystals. Given they are not flat, they are capsizing the light from any angle and directing it to the solar panel by exploiting any angle of it.

Which can be the application?

From the storytelling just for the exhibition, I think they can be developed as lighting for Swarovski itself.

What about you once returned in Amsterdam? Will you start a factory?

I really want to focus on more collaborations, they are crucial. For instance this project has been done also with the participation of the Energy Institute of the Netherlands and its knowledge into producing the solar panels. My next dream is to make a solar powered pavilion entirely made by glass and I need to find the right partners to finance them. It was amazing to work with Swarovski because I did not have to worry about this part of the venture.

What about the books with you now?

When I read The Solar Revolution by Steve McKevitt and Anthony J. Ryan, it changed my life. It became the bible for me and I started a company only focused on solar energy. I also like to read mythology.

And what about reading poetry?

They keep on changing a lot, I like fruits and rhubarb a lot! I have addictions, when I am really into something, for instance cherry tomatoes, I can eat it for a week until the next addiction. Now I am on burrata!

My talent is to do not give up, I have just to do it: I am persistent and I am good to convince people to come on board. On the other side, I sometimes take too many risks, and need to be become better in maintaining the level of energy.

This was a bit behind my stepping back from London, it is not the right city to work on your energy, it is too demanding.

To set a company in a country where you will not know what is going to happen is too risky.

Where do you see yourself in ten years or in in a longer distance? I mean, are you seeing yourself always in the design field?

I do not see this field in terms of form and function. I am more on the inventor side, on the pioneer’s venture.

I want to make a mark, and contribute towards a positive impact to change the mentality to our energy consumption, and potentially to create a movement around these ideas. All self-powered objects, buildings and use our environment in a much better way.

To learn more about Marjan: http://www.marjanvanaubel.com/about/