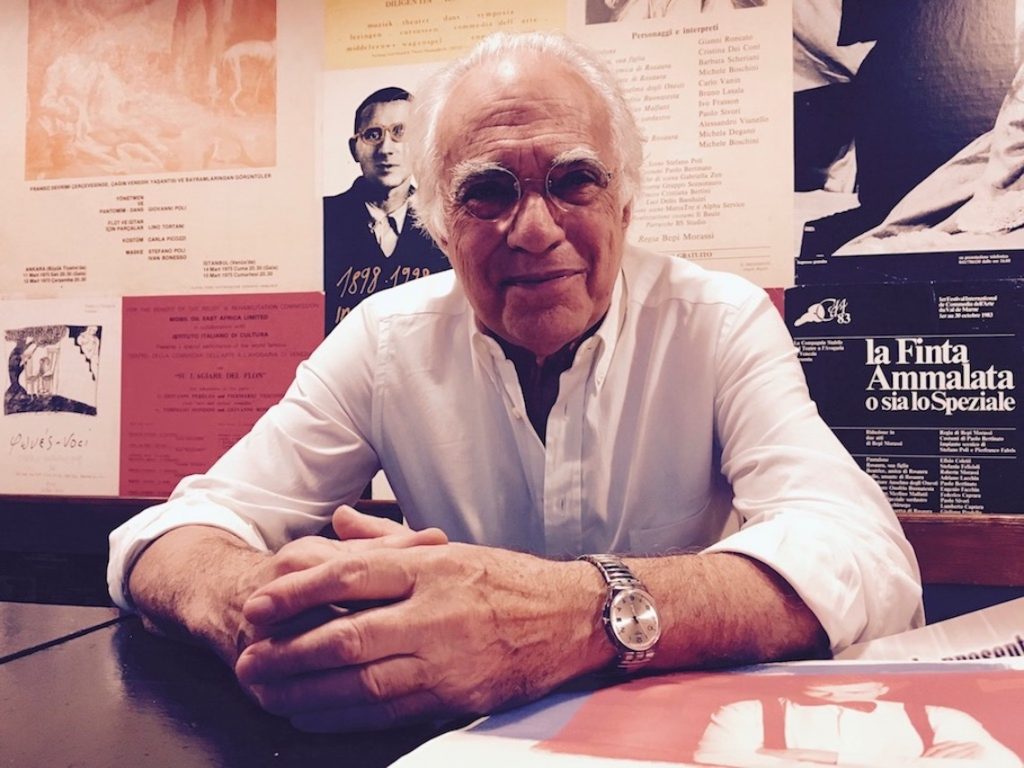 The backstage of the most historic of the independent Venetian theaters every Tuesday hosts the collective dinners of the visiting company and the public.

It is here that I meet Stefano Poli who talks to me about his Avogaria.

We had already told you about his wife, architect and director of the most beautiful city museum, and now we can finally make you “browse” his life too.

The “Tuesdays” of the Avogaria are always sold out: only solos in one replica covering every kind f genres – from the drama to comedy to stand up comedy to engaged theatre…. Then, everyone ends to eat and discuss together – actors, directors, audience, enthusiasts and the theatre workers.

The 100-seat Avogaria is the only theater in the cities I inhabited where you come to see everything, without arrogance and with great mental openings. A real reference for Venice, orphan for years of quality theater.

I was born in Venice by Giovanni Poli and Carla Picozzi. From the first years of my life I go to the theater because my father was the founder of the Ca ’Foscari university theater. My parents always took me and my brother on a tour: since 1958 a lot of stages have been paraded through my life and we’ve traveled the world.

After the war, then from the 50s, my father began to direct and especially staged authors who were not allowed to represent during fascism.

Although I come from a “theater” family, I eventually enrolled in architecture. Since the 1970s, and still today, I work as an architect. I therefore share a bit between my profession and the theater, which is an affective fact: as you saw I “was born” in the theater.

Did you and Daniela meet for theater or for the university, being both architects?

She came here from Brescia to study architecture and shared an apartment with other female students I knew. So we also met, we loved each other and we are still together, thankfully (for me!).

The theater becomes a “forced” profession when you take over the Giovanni Poli School of Dramatic Art and since then you have never abandoned it.

And your theater remains a true reference point for the city.

My father had always said and written that he would have loved that all this would not end when he would have died. So we went ahead, with difficulty: as long as my mother could hold the association and the theater, I was yes present but only involved with theater made by youngsters.

When my mother was ill, I took over (it was 1995) and when I found myself dealing with everything – without money but with a great space – I also began to plan the theatre calendar.

I love your Tuesdays, how did they come to mind? Although in Venice it is easy to win because here quality theater is no longer apart from the Theatre Biennials

When my father’s school was still operational, until 1992, we were used to perform the Mondays – days when traditionally the theaters are closed. Then we moved on Tuesday, we liked it better.

I am now rearranging all the posters of these years to build the archive.

All those who say that the theater is dead … it is not so. Take the ones coming out of the theater academies (like any university in Italy today): they don’t find work and join together to form small companies. It is also here that the theater lives.

After seeing a show it is usually a sad moment: maybe it is up to you to go home with your wife in extreme silence … instead at our Avogaria Tuesdays you meet not only the protagonists but other people, discuss and food is the vehicle for this sociality.

We started with a little difficulty putting together the calendar (Tuesdays are seasonal: in spring, autumn and winter) but we now receive over 60 proposals that I select with more successive skimmings. I prefer diversity: social, cultural, racial.

How do you select the themes? How much comedy, how much drama?

I select comic texts, in the sense of something that is not only tragic. Many offer arduous performances, the public gets bored. It is better to be able to cast important themes in an ironic, satirical key. These are my favorite shows.

Among the shows that we have recently performed, that of a girl who tells her homosexual life, these are themes that interest the public even if we are almost in 2020 but for them it is interesting to ‘read’ the mental path: from the coming out upon the termination of a relationship. In a clever and amusing way.

It is impossible for me to tell you what I liked most in all these years but I can tell you that we have set up a prize. The public votes every show and at the end of the season there is the counting of the cards. The following year we invite the company that won and in addition to hosting one of their shows, we reward them.

We also hosted shows whose actors are special “students”: most recently a company from Mondovì. They study theater within a psychic center of which they are patient.

I seek – and accept – diversity in all directions.

You also open to the city. For example, do charity: I remember that every year a pantomime in English, with non-professional actors who collect funds for local charity …

Every two years! They offer pantomimes in English for adults and children.

Now I am hosting a group of actors and directors – a magician from Como and other Venetians – in residence who for two days try a magic show for free. In return, they will come and do it here.

Even the weekend, where we are more dedicated to the comedy of art, I sometimes host selected amateur companies. And then on Saturday we have the evening dedicated to stand up comedy.

Where would you go to the theater, as a spectator?

I don’t go there much, we met at the Theater Biennale because Daniela dragged me there!

Actors are born, not made. You can do it if you study but you will always do mediocre parts if you don’t have it here and here (he means and points to head and heart).

The Avogaria theater school was born from seminars that my father led. He did it mainly to create a nursery of actors for his shows.

Today at school we have five courses: two for children and boys; a more complete one lasting four times a week (with more subjects: from the diction to voice training to the comedy of art) and two acting workshops that are in the evening hours.

Every year our students go on stage.

Our current director of acting and stage practice is Stefano Paggin, then that of the laboratories is Angelo Callipo, who is also a dramatist.

Every year the number of students varies, from 10/12 of acting to 14 enrolled in the laboratories.

Which books do you have on the table and what music are you listening to or do you like?

Don’t ask me this question …

What script would you suggest to our readers?

Brecht, for example. But they could also start with something less ‘recent’ like Gozzi (Carlo, a Venetian playwright – contemporary of Goldoni) of which next year marks three centuries from his birth. We will prepare something.

Then there are many others … easier and less easy, but perhaps reading scripts is not so funny.

I would recommend more Pirandello, a great classic, than Shakespeare who, for example, is better to see played than read.

One place – secret or not – where do you go to relax

Here where we are now, in the backstage. Often when I finish at work I come here to relax.

And a place that you particularly like where other people could go to relax and what would you recommend here in the city?

I have no such places …

What do you think Venice gave you?

Ah, everything! I thank Venice for being born here and staying here in the end. It is my city, sure, but beyond being the city of the past is also the city of the future. Look at the traffic: a pedestrian type city is the destination to which all other places should strive.

Will it survive itself? Will the young people born here today find the same great culture that you met?

I can’t answer you. Certain things, like the beauty inherent in every place of this city, can be understood them when you are much more mature.

A bar where to meet you?

At San Barnaba or Santa Margherita

A talent you have, one that you miss?

A talent that I believe I have is that of knowing the whole technical and constructive part of a stage – from the lights to the scenes. What I miss is – despite having acted as a boy – being an actor.

My father never taught me … I thought he wanted to avoid me a hard life or sacrifices but sometimes I even thought he did it because he thought I wasn’t fit to act … I still haven’t understood and alas I can’t more ask him …!

I learned how to be with others, especially with those who are younger than me.