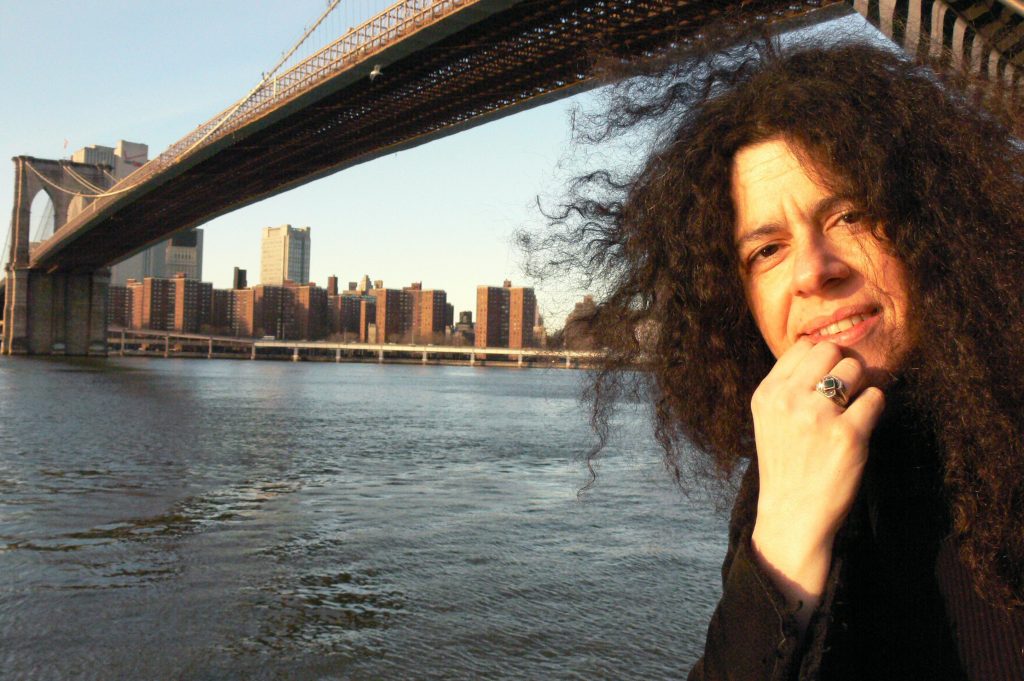 My mother, a very generous woman, has been very supportive of us: I was very determined to move here, I fell in love with American music and literature and I needed an excuse to come here. Therefore, I chose to enroll into the Film Department of New York University. At that time, we didn’t have an actual degree in that subject in the Italian university. It was the right strategy, she sent me! Since then I came back to Italy only for short periods of time, for literary projects or family reasons: I was never able to leave the US again. I lived an American life, I got married more than once and shaped my family here.

I am presently writing a guide to the rebel New York for the publisher Voland (it will come out next year) and just as you and I are talking, I am writing a page on Garcia Lorca: it was thanks to his Poeta en Nueva York, in which he writes about his 1929 ten-month journey in the US that I’ve met Walt Whitman and Harlem so many years ago. From then on, all the rest of my seminal authors: Melville, Poe, Hemingway, Wharton plus Baldwin, Hughes, Morrison, Lorde. And then Monk, Coltrane, Hendrix, Dylan.

Maybe the awkward thing has been to have continued writing in Italian for so long. My passion for writing comes from my youth. I arrived in America already with this strong vocation, gift, and discipline. I now write also in English, the topics permeating all my novels are those of the journey and of being displaced. Italy is seen from afar, with sweetness and melancholy. Maybe a bit oleographically.

I donated myself to my passions straight after my dissertation: the classical studies (I currently teach classical mythology and Greek literature at the university) and religious anthropology, specifically shamanism and African religions.

When I was in Harlem, I trained to become a Yoruba priestess – it’s a South-West Nigerian religion syncretized with other faiths, such as Christianity or Amerindian religions. It is a very complex voodoo-based faith. I studied with a priestess and I became one myself in 1991. Yoruba is an oral culture and we learn, teach and heal through storytelling, chanting, the cult of the dead and the gods, and the art of divination. My last book (Come della Rosa, ed. Effigie) talks about ministry and how the main character gets back to her origins through the practice of storytelling. The novel tells about how storytelling can be a form of magical medicine and transformational therapy.

You are the curator of the Italian literary programs of B.A.C.A.S. (Borghi Antichi Cultura Arti Scienze), a multidisciplinary residency for artists and scholars created in New York but located in your native land- il Parco Nazionale del Cilento, Vallo di Diano e Alburni. The project was developed in order to give back to your land. Who is behind BACAS? Can you tell us more?

Yes, BACAS is a center for artists and scholars, meant to encourage and sustain interdisciplinary collaborations between established and emerging artists and scholars from all over the world. We are located in New York City but we operate in a 12th century castle, Castello Macchiaroli, in Teggiano, a medieval town in the Parco Nazionale del Cilento, Vallo di Diano e Alburni in Southern Italy.  We offer short and long-term residencies and fellowships, and curate exhibitions, workshops, and symposia. We have envisioned a center where artists and scholars will have time and space to work by themselves or to collaborate with each other. We’ll be organizing also cultural activities for the general audience. That is also because the founders of the projects come from different fields: Pietro Costa is a visual artist and Denver Butson is a poet.

The idea was born from the desire to give back to this land so loved. This land has given us the chance to leave it with lots of visions, imagery and potentiality, which we used elsewhere, yes, but deriving from Vallo di Diano and Cilento continuously: a source of inspiration that has nurtured both our imagery and our memory. We wanted to get back to the mother of all that, which for us is located at the bottom of the Cervati’s mountain. It may sound a bit romantic but it is what it is.

Of course it hasn’t been easy. For myself, I’d thought for years on how to make it possible and I shared the idea with various friends but it stayed an idea, left behind as the coffee cups on a table. The nice thing is that here in New York I found a person, Pietro Costa, coming from the same Italian valley I was born in, who left Italy when he was younger than me.

He had had the same idea and already found a partner, the poet Denver Butson, who happened to fall in love with our native land and agreed to work with him on the project. By the time I got into the project, Pietro had already set things in motion and it was happening. I immediately embraced it and now, with our hard work and the generous support of our valley and region is happening!

Our land – Cilento in general and Vallo di Diano in particular – is not so known even by Italians. I use to get upset as a kid when Sala Consilina, my little town, would be named only as the highway rest stop on the way to Calabria or Puglia. Very few visitors would take the time to detour and visit the valley despite its rich artistic heritage and the poetry of its natural landscape.

The first BACAS edition will run July 6-16, 2018 and we’ll offer ten days packed with seminars, concerts, lectures. The next editions our residencies will be longer, from two weeks to a month.

This year we will start with literary, architectural, visual art and music residencies.

With regard to literature we have an Italian and an American program.

The American guests are the novelist Edmund White; Garnette Cadogan, a writer and literary critic dealing with black culture; the poet Denver Butson, and myself (our literary reading on July 13th will be bilingual and theme-based).

There are also architectural, musical, and visual art programs but for that I invite you to check our website!

Talents or abilities? Is there a difference? My greatest asset is memory. I can recall everything, it’s unbelievable.

Then, my listening ability – that’s also by trade of course, being a priestess. This can represent a problem for those confiding in me, given my first talent!

The third is that I’m quite a likable person or at least this is what my students think of me: they crack up quite a lot when I lecture on Homer. And to make people laugh while teaching the Iliad is a talent in itself if I say so myself!

1) Detachment: I tend to be judgmental, it’s maddening.

2) I am sentimental; I get moved too easily. And that’s irritating.

In both these cases the underlying assumption is that I am taking myself too seriously, and that’s a no-no. Who do I think I am?

Joys and hurdles to work as a priestess and a teacher?

Teaching The Iliad and The Odyssey is very rewarding.

The joy of teaching is residing in the teaching itself, when you see your student being engaged. Their involvement depends on our ability to teach them, however, and on our commitment.

My pain is to witness to the change of the American university from a place of education to a factory of grades. This stresses students who only worry about their evaluations. They lose interest for learning and consequently I for teaching.

As a priestess, things are different. My religion is a wonderful experience, very profound philosophically and its fundamentals are close to the ones of the ancient Greek religion. My emotional attachment to its philosophy is strong, I seem to renew my promises to its tenements continually after all these years. The joy, there, is the everyday practice of my ministry. Many believers are coming from underprivileged social strata with a bleak demographic situation. There is lot of room for personal retribution within this religion. Especially for women who, through the priesthood, gain privileged positions that gives them back their dignity in social groups usually keeping them on its fringes. This also happens in one of the most racist countries in the world, America, and it’s not a small detail. It’s also hard work, but every priesthood in every religion would be/is.

Where do you see yourself in ten years? Always in USA?

If you were asking me this ten years ago, I would have answered yes. And not only in the US but here in New York.

I am starting to question the idea of living here when one gets old. The cost of living in the city is overwhelming. New York has always been a hard and ruthless city but for other reasons: it has always had a rebel soul so to say and welcoming pockets for people who wanted to create an alternative kind of life. Not anymore. Now the cost of living is such that it’s impossible to think of making it here without a sound financial plan. I see myself here but with long intervals elsewhere, in Italy and maybe Greece, the places I love more. But also the peaks of South-East Colorado where I lived for seven years and where I still own land. And where life is dramatically easier than in New York.

The West is also part of my literature, in my first novel I write about this incredible American experience.

I don’t think I would ever be able to leave the USA completely: my roots here are as deep as they are in Italy.

Tiziana Rinaldi Castro is the author of Come della rosa