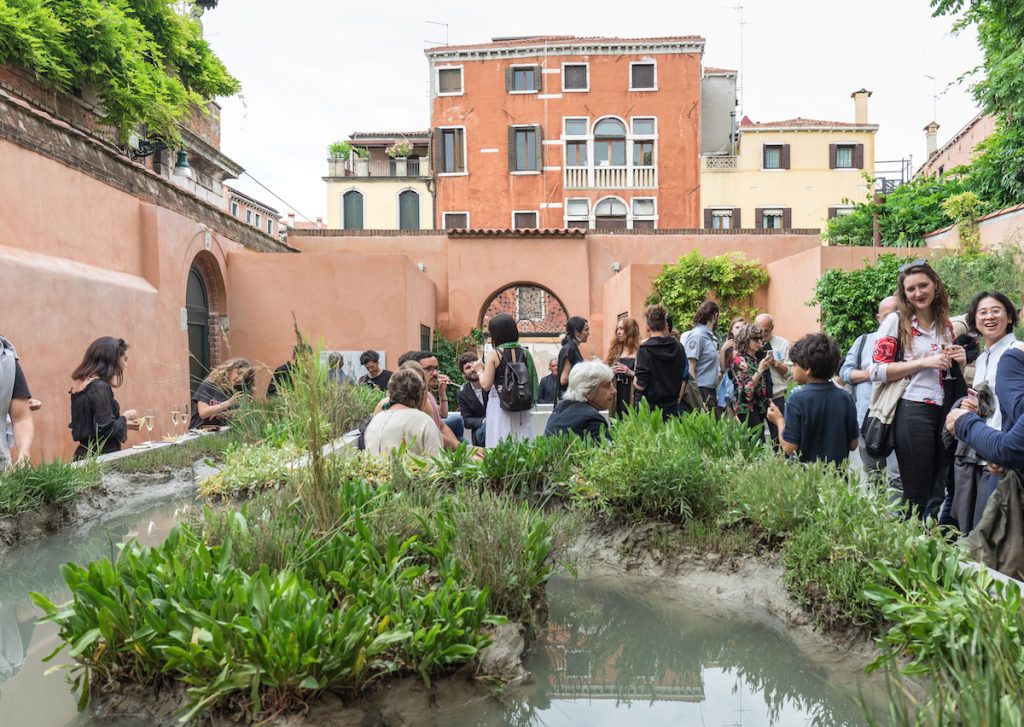 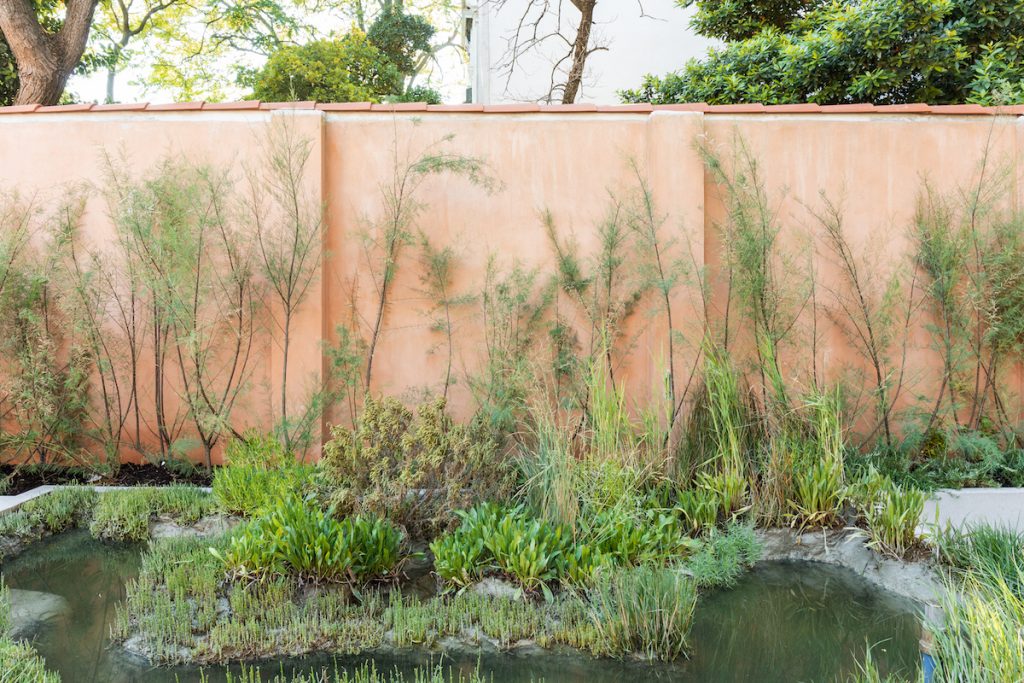 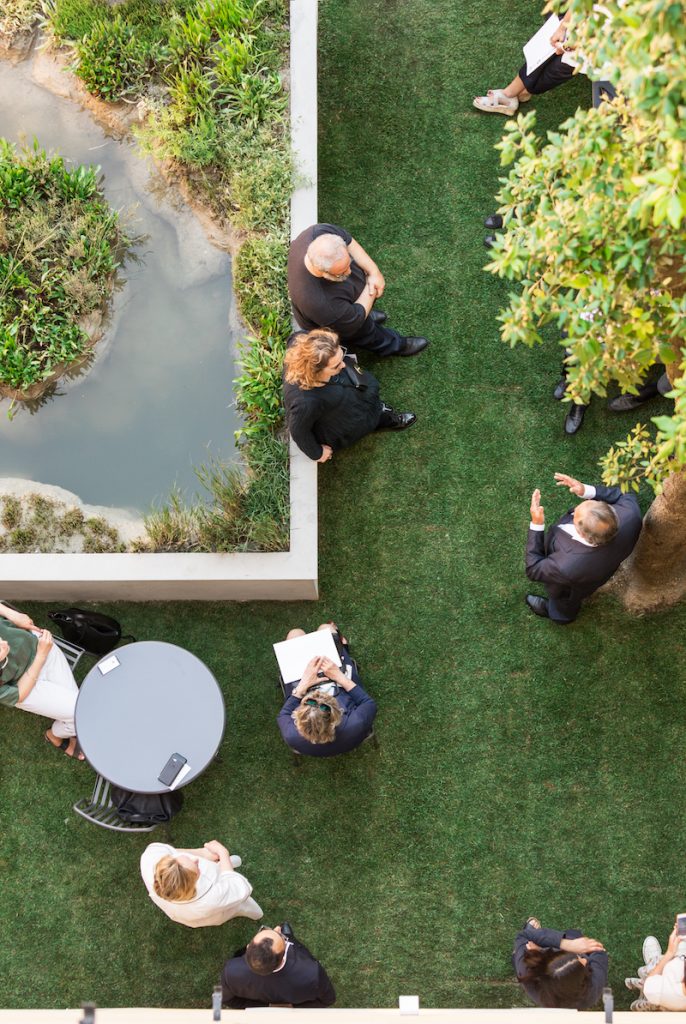 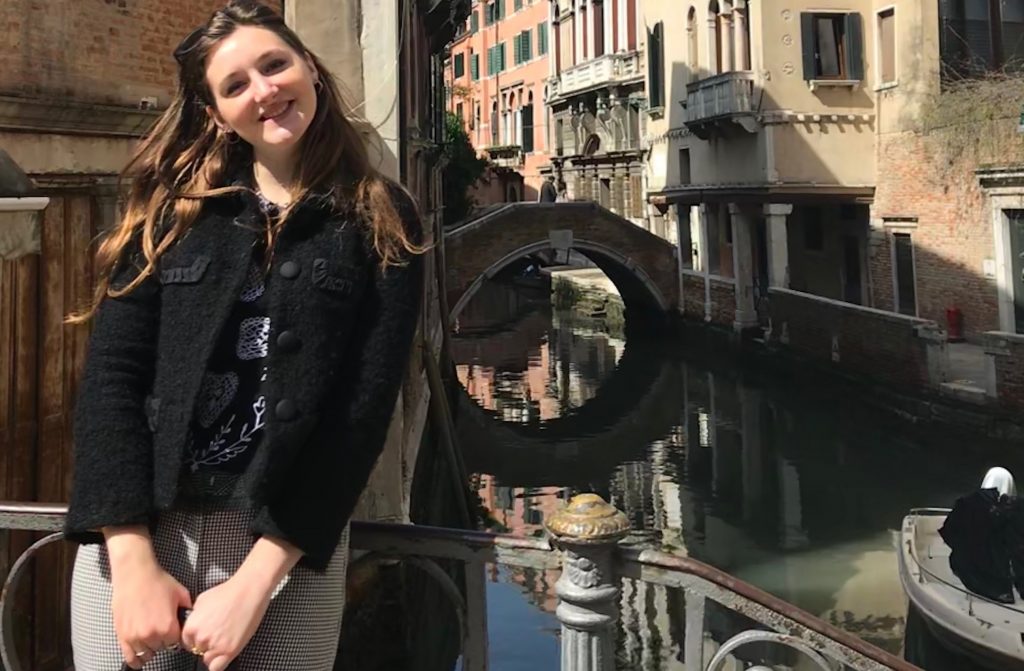 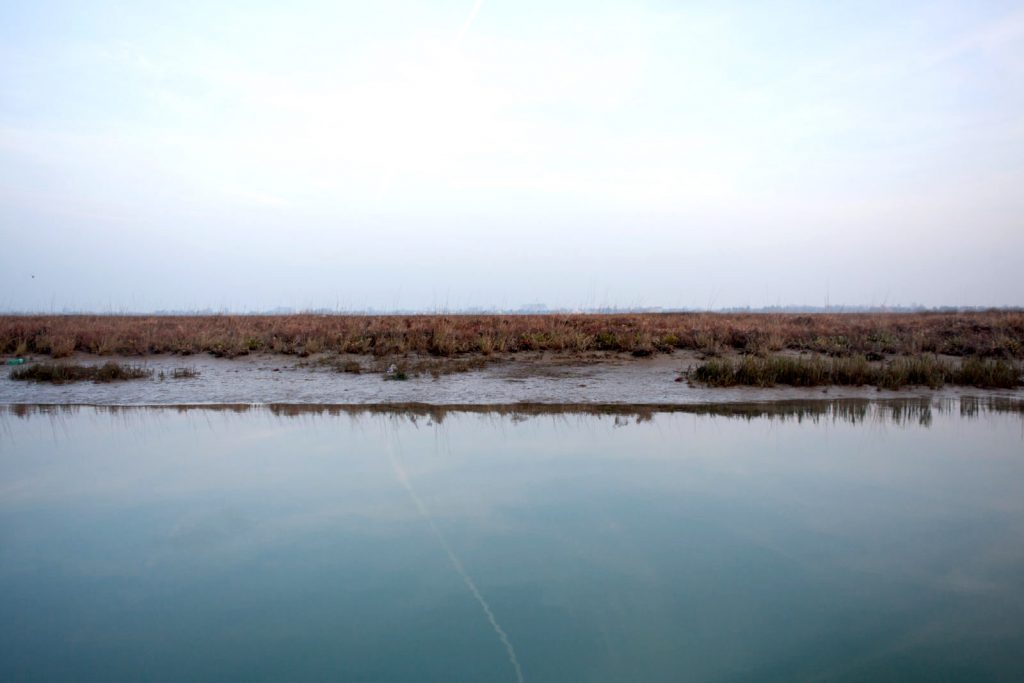 An unexpected and awaited public space – a garden, a fractal geometry of the Venice Lagoon (and much more) – finds home in the poshest, most privatized and mass-tourism invaded Venice sestiere (district), Dorsoduro.

The space is officially owned by a private Russian art Foundation, V-A-C, and is located in its premises but accessible freely from an independent gate.

This is a quite new and shaking urban and art project led by Assemble Studio (UK) and We Are Here Venice (Venice).

It is open every day since May 2018, 8 am -11 pm, easily located at the end of a tiny calle just on the left of the V-A-C Foundation main entrance at Zattere.

What is Living Lagoon?

Assemble: ‘Laguna Viva [Living Lagoon] is the first stage of a long-term strategy to enable Palazzo delle Zattere to engage with the complexities of everyday life in Venice. The strategy was developed by Assemble and We Are Here Venice for the V-A-C Foundation in 2017.

The new, free to access, permanent outdoor installation enhances the on-going conversation about the intimate and mutually dependent relationship between Venice and its ecological context.

The typical lagoon salt marsh habitat are arranged according to botanical associations and functional morphology and housed in a landscape of tiled tanks. Inspired by the generosity and richness of Venetian floors, the 12,000 tiles were made using an adapted version of 19th Century British encaustic tile-making techniques, introducing a moment of chance into the processes to make every tile different. The tiles were developed and made by Granby Workshop, a small ceramics factory in Liverpool founded by Assemble in 2014.

The Lagoon tanks build on the successful experiment by Jane da Mosto with muf art/architecture for the British Pavilion at the 12th Architecture Biennale.

The installation is accessible to visitors to the foundation, artists and local residents. These microcosms of the lagoon are offered as a resource for research and teaching on ecological resilience and the natural systems that underpin the survival of the city.’

We’ll talk soon with Turner Prize Assemble Studio about their stunning, marvelous Granby workshop, and about their Toxteth initiatives of the past, when the tiles actually hosted in the main section of 16th Architecture Biennale will be moved from the Giardini to the V-A-C salt marsh garden. In the meanwhile, we’ve met Gabriella Gilmour, the operations manager of We Are Here Venice, to hear more about them.

How We Are Here Venice started?

I’ve been working for the organization for over a year in total. I was originally in town in 2016 for several months interning at a cultural foundation when met Jane, the executive director of We Are Here Venice. I was just so taken by the organization and by what she did, so fascinated because, having lived in Venice already for three months, I thought that there were so many problems and challenges and nobody seemed to be addressing these.

I studied Politics and Italian at the University of Bath, England. Whilst my friends were in London in jobs all quite similar to one another, I was very happy to come here.

We Are Here Venice was founded by three people in 2015 but the idea was already growing for a while prior to its official establishment. Actually the first thing we can look to is the British Pavilion at the Venice Architecture Biennale in 2010. Jane is an environmental scientist and collaborated there with the London based muf art/architecture practice.

I remember that pavilion and I wrote about it quite a lot, they did a similar thing with the salt marsh tanks…

Yes, after that, the idea and the organization grew. Now, these past few months have been quite busy and we have started various initiatives and been involved in a lot of different projects, so the press attention has definitely picked up!

We have five project areas. The first is ‘Contro le grandi navi’ / Against large cruise ships and that is just the most emblematic Venetian problem, by no means the greatest. It tends to symbolizes much more: everything that’s wrong in Venice. If we can address that and come to a proper solution that is actually implemented, it opens the door to start addressing everything else.

There are many people on the scene for that and many other non profit associations working in this field and anyone seems to have their own and irreconcilable reasons to be ‘against’. That is also defeating the common strategies to solve the problem, what do you think?

It’s true the cruise liners have to stop immediately their passage in the lagoon because it’s heavily dangerous (and a law on national level stated that even being unsuccessfully applied given a contrary law applied on local level). There was an accident a few weeks ago in Giudecca and this can happen tomorrow, after tomorrow…The city is not only for us, given is also an Unesco protected heritage.

Why according to you these groups protesting with their own reasons do not get united to be more effective?

I’m glad you mentioned this.

Something undoubtedly brilliant about Venice is the number of different associations and civil society organizations that exist, however, they remain distinct from each other which is a missed opportunity in this specific context; if they came together more they would have to be heard by the administration because they would of course be stronger.

There will always be differences in opinion over what to prioritize. I also found, and maybe you will disagree with me, that often the leaders of these organizations wants to be in the limelight because they feel that they need to specifically represent their individual association and members.

We also support the division of the municipalities of Venice and Mestre. When I firstly came here, after studying political science and having experienced the Scottish referendum, I was skeptical and found referenda to be inefficient political tools. Then it became obvious that having a separate administration to the mainland is essential for Venice and its lagoon. Joining the various meetings with individuals and associations involved in this campaign, voices were often raised and some would persistently speak over one another. This is not constructive, but perhaps the disorder is due to the fact that Venetians need to raise their voices because they’re not usually being heard. Yet if everybody listened and was listened to, there would be mutual understanding and a common strategy could be agreed as we are all citizens and stakeholders and there is strength in numbers.

In my opinion it’s very hard to practice democracy here and that’s why the city is stuck. But you might have a different opinion by carrying on with We Are Here Venice…Which are the other four campaigns representing your non profit organization?

Rising water levels, which of course is a worldwide focus. Our situation is unique and involves everything about acqua alta and so on. The CPSM (Centro Previsioni e Segnalazioni Maree), is currently restoring the tide gauge at Misericordia, as a result of our collaboration. It had been neglected and is in an essential location, you of course know how difficult it is for ambulances and fire department boats to navigate under bridges during high tides.

Water levels is very much targeted on the specificity of Venice. Often we get film and documentary crews coming here: they interview us or we’ll take them on a tour around the city to help. It’s very important to explain the realities of acqua alta because there is substantial confusion about what it is and how it’s caused. Along with the wider workings of the lagoon, it is a very scientific, ecological area of intervention for us.

Then we work on the subject of Venice’s governance. As it is, the local authorities are not adequately addressing the problems, if at all.

As soon as you have somebody else taking the reins of the administration on a closer, smaller scale, if the will is there, you can change things to account for Venice’s singular circumstances. I am struck by the short-termism which dominates here. It’s a contradiction in a country where family and heritage is so important. In Britain I think there is a stronger sense of, and regard for, posterity, which is evident at the political level. Whereas in Italy, even some of those in public office set an example of endorsing individual short-term gain.

Why the name of your non profit is just in English? Is because nobody else could save Venice inside the country?

Definitively not. We think international support can help prompt system change but first and foremost, it must be the Venetians that take it upon themselves. No one else can come and change the situation. It is the Venetians that make Venice and the actual wording ‘we are here Venice’ is meant to be in solidarity with Venetians, to say just that: ‘we are here’. It’s in English so that the visitor to Venice can understand that.

You work often with very strong and unforgettable stickers and posters you widespread around. Tell us more about this…

So we have two other areas of focus, ‘Outreach’ and ‘Finding a language of value’. The posters are really part of a wider awareness-raising campaign, currently focused on air quality and pollution (recent World Health Organization and EEA reports highlight Italy’s dangerous levels of particulate matter.)

The posters need to be eye-catching because you have to compete with the other publicity – adverts for events and art exhibitions. Eleonora, who is our graphic designer, is an artist activist. It’s a powerful combination of skills.

We base the poster statements on official sources like the above mentioned reports or on other scientific publications and then apply a strong design. In June we’ll have new posters coming out and the lettering will be red while the previous ones were in black because these issues are urgent and should be read as a warning.

Which is your fundraising strategy? Which are the most responsive people?

Mostly individuals, though it depends very much on the specific campaigns. It’s fantastic when we find enthusiastic people wanting to help because Venice means so much to them.

We have successful flag campaigns for the Regata Storica each year (‘Venezia è laguna’, ‘Venezia è una vera città’). People like to show their support visually with flags that can then be seen hanging from boats, balconies and windows.

As per any association, we welcome members and recently changed the rates. There are also international individuals who have special memories of Venice and could not imagine Venice without Venetians so they provide invaluable support to our activities too.

In terms of funding, we are not yet approaching other institutions for grants, but we collaborate and work together on specific projects, which is great for us.

Where do you see yourself and We Are Here Venice in ten years?

Hopefully, within ten years time, so many constructive changes and long-term solutions will have been implemented that we’d no longer need to exist as Venice would have been put on the right track! Jane says something funny about that: she has four children and if Venice did not need her efforts anymore she could dedicate herself to looking after her family. …I would have to find another excuse to continue living in Venice!

In the meanwhile, I hope we can expand our team within each specific project area and have dedicated researchers and fundraisers… we need lots of people power.

We also hope to see some change in the administration of the city government.

To learn more about them, visit https://weareherevenice.org

The cover picture of this interview portrays the opening day of the garden and Gabriella is on the right with her colleagues. The other pictures are courtesy Delfino Sisto Legnani and Marco Cappelletti for V-A-C, except Gabriella’s one which is made by Gabriella’s sister and the last of gallery, picturing the lagoon and courtesy Assemble Studio.