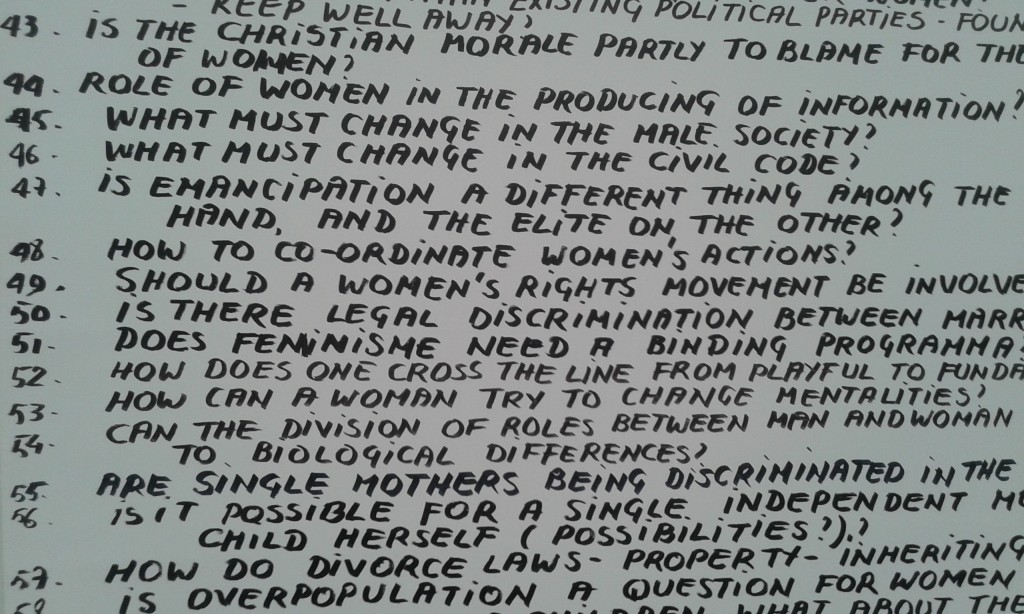 From Innocent Rebellion To Militant Feminism

What happened to Feminism

In 1970 Germaine Greer’s book The Female Eunuch touched a sensitive nerve with a large majority of women. Greer was an excellent writer and great publicist. Her wit, beauty, and style turned the media’s mocking, negative caricature of feminists as sexless, hairy-legged, saggy-breasted lesbians into appealing, fun-and-man-loving people that women around the world could identify with. She wasn’t saying anything particularly new, but in the socio-economics of the late Sixties women were ready to listen. The immediate result of this upsurge in feminist consciousness was the proliferation of feminist magazines that said get out and help yourself, stop being helpmates to men. Create your own independence. The most puzzling question we began to ask ourselves was: how had women ended up in a situation where they had so little control over their own lives?

The early publications of the feminist movement, in Britain, were very self-aware and amusing and carried much of the color and vivacity of swinging London with it. Not least the humor, as evidenced in one of the first newsletters titled, Harpies Bizarre, before it changed its name to Shrew. The first of its kind to captured an audience that was moving away from the Beat – hippie culture to a sophisticated feminist was Nova magazine, its features on drugs, racism, childbirth, women’s rights, sterilization, and sex made it a vitally important magazine and helped build feminist foundations which sowed the seeds that flowered Women’s Liberation. Already by 1967, Britain had made more social changes that affected women than any other advanced country: legal abortion and freely-available contraceptives and new laws on divorce and equal pay. Throughout the permissive era of the Sixties, the general easing of the restrictions gave women more control over their lives, yet a lot of ruthless sexual exploitation existed, not the least of it in the Underground counter culture. Compulsory promiscuity was endemic and the cries of “don’t hassle me, don’t bring me down” were prevalent at the least sign of “women being possessive and selfishly monogamous.” The independent dolly bird was the female symbol of the age. She worked, managed her own life and symbolized everything that was new, liberated and risky. She was sexually experienced and, since she took the pill, there was no fear of consequence or threat to a man’s independence. The real dream dolly bird, as men termed it, was “a good fuck.” She did it with anyone and with enthusiasm. She gave great blowjobs and was there to make tea and clean up afterwards. We all aped the dolly bird, but in fact this new symbol of womanhood was no more self-empowering than the previous one. Feminist protests came about almost as an after-thought we realized that although the counter culture advocated equality for the under-privileged and the blacks, women were not included and men wanted it to stay that way! Sure men were happy to relinquish the total financial burden for the home, to have decent childcare and not too many children, however parity in the job market or in the sexual area was quite another matter. The male mocking was fierce.

Until the 1960’s equality for women was only for those strong enough and talented enough to take it in spite of male restrictions. Unfortunately, from it’s first enthusiastic beginning, feminism has increasingly been taken over by radical extremists who believe women are traitors to the cause, or perhaps victims of brainwashing if they like to look sexy, love men, or prefer to put family ahead of career. A book by Professor Christine Hoff-Sommers, Who Stole Feminism paints a very disquieting picture of the twisted academic world where tenured women professors not only claim they have second-class status in society, but are as well hapless victims of an invisible all-powerful conspiracy. The book, first published a decade ago, reveals the slow take over of the feminist movement by a radical militant fraction where anyone, man or woman who dares to question the authenticity of those politically correct militants are publicly tarred as a misogynistic sexist. Is this a ploy to silence critics and divert attention away from the massive funding that is given in the name of supposed academic research under the ‘gender studies’ umbrella. In case after case, Sommers shows how these extremists, who have an enormous influence beyond academic circles, have propped up their arguments with highly questionable but well-funded research to present inaccurate and false information on everything from rape to domestic abuse, to economic bias, to supposed crisis in girls’ self-esteem to perpetuate a view of women as victims of the “patriarchy”.

Today women hesitate to call themselves feminists, yet the Feminist movement changed the way women in Western society can reach their potential. In the mid sixties we had the great British politician, Roy Jenkins who said, I am opposed to the puritanical restric­tions that are responsible for the drab, ugly pattern of life. If we replaced the rest of his phrases with the word men for authorities, and women for people, it would read men should not dictate to women but leave them free to live their lives and make their own mistakes, provided they don’t infringe on the rights of others. Intolerance breeds intolerance.”

In a recent survey only 29 percent of American women and 42 percent of British said they were Feminists. I imagine the percentage would be even lower in France where they only had the right to vote after the Second World War. What exactly is it that the anti-feminists don’t agree with? Don’t they want the same pay for the same work as men, or the right to speak out about equality without being put in prison as happened in the early years of the 1920’s and still happens in Russia and other countries? I just wish people had a sense of history and didn’t show their ignorance by claiming not to be feminists when it is so obvious that they already have the rights that feminists in 1960-70 fought so hard to get for all women. A woman saying I’m not into feminism or women’s rights is like a black person saying I’m not into civil rights. Why wouldn’t women want the same rights as men? It is enraging to hear women say they aren’t feminists because they like men as if the two are incompatible? I am a feminist and I like men and I love my companion. He doesn’t think a man is superior and he doesn’t treat me as if he owns me. He doesn’t think men always know best and he doesn’t try to diminish me because I can do some things better than he can. As far as I am concerned men can carry on doing pretty much as they like, they should be free to live their lives and make their own mistakes, provided they don’t infringe on the rights of others, which is exactly what I want to do, but with the right to do it.

Karen Moller is a fashion and textile designer and a writer. Among her last publications, In Her Own Fashion (Sterling House) and Technicolor Dreamin’ (Trafford Publishing).

Image cover: Take Me (I’m yours), detail of an artistic manifesto on Feminism (exhibition at Monnaie, Paris), ph. Diana Marrone