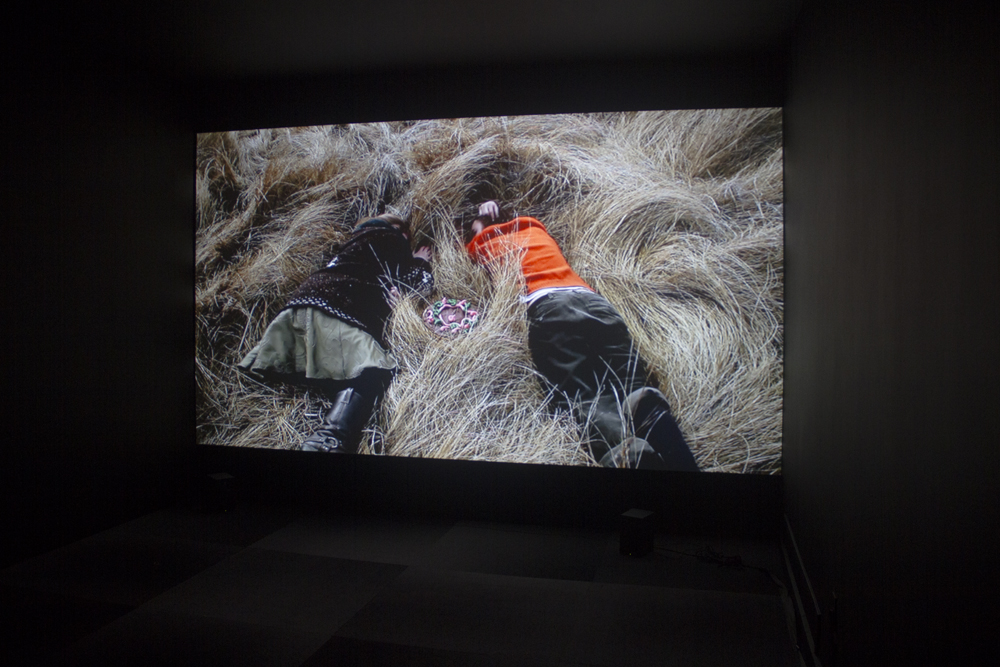 Young Suh and Katie Peterson:
Can We Live Here? Stories from A Difficult World (image from the exhibition)

I brought my wish on the trip because I couldn’t leave it at home. Besides, we were going to a smaller country – it seemed safer than home. But on the second day an eclipse happened. The shadowed plane of light falling over everything felt like evening had mistaken morning for its own territory. Half the city moved about their business and the other half stood still.

I told the wish it had nothing to worry about. Then I realized it had grown bigger; why else would I be talking to it?

The first time I spoke to the wish I told it a lie.

Why couldn’t I be gentle with it?

It wasn’t a prayer, it was a wish.

The four of us travelling together felt collective relief when we saw the water. Making the ferry now a given, conversation settled again like sunshine on that hilltop, vigilant, like we’d stop it at any moment if we needed our wits about us for transit to continue.

The road we drove had come out of the interior but now traced the edge of that country, north of its westernmost city, the first city we had landed in, the city, we had been told, the poets loved most, the only city in that country in which sun did not visit like a stranger.

In that westernmost city, sun visited instead like a relative you like better than she likes you– with stingy gifts you think of as generosity. That city, right on the ocean, was still part of the country whose interior closed in upon itself in the late hours of winter twilight.

The wish stopped sleeping when I slept. Granted, sometimes it slept when I was awake, doing my business, roaming the earth, sometimes I’d find myself talking about desire with the other woman in our foursome and I’d think it had to do with deer, lyres, a body in a bed, dancing. But I’d wonder later why the conversation went a certain way. And I’d realize the wish had taken it there.

The journey wasn’t hard on the wish– the wish enjoyed it, thrilled at it even, to be in a smaller country, to be always comforted by the possibility of finding a small god, to be placated by cups of tea. To grow bigger in a place where one could not expand forever, to safely take up more space, to learn not to hide.

A great moment, realizing we were in plenty of time for the ferry. Walking down the ramp, us four, two and two, making up almost a quarter of the ship, jolly, like four canaries, but sleepy, like acorns with their hats on nestled at the foot of a tree. Nothing more natural than situating ourselves with our bags in unassigned seats, a kind of obscure splendor, the lumpiness of our garments, the buttoning and unbuttoning in the heat of the hull. The men kept going back and forth on deck, my companion and my friend. The women, me and my friend’s companion, took the opportunity to sleep.

The passengers of the ferry spoke a nearly extinguished language.

As far as I can tell English can hold more guilt than any other language.

But the nearly extinguished language the passengers on the ferry spoke could hold more rain.

One way of saying this is that English can hold more dead people than any other language and every other language, perishable, holds more living people.

The wish wanted to live. It rose to meet those speakers of the language of that country English nearly extinguished. It grew bigger. I unbuttoned my coat for it, I went to the toilet and threw up but the wish didn’t come out. My belly stayed big. But a feeling rose in my chest and kept rising. In my seat, eyes closed, I heard those speakers, their low hum, their vowels. It wasn’t national, it was guttural, though it became light nearing laughter, there came a panic in it and the panic educated it, sustained it, rather than toppled it, the panic felt like a list of groceries bought on the mainland, the panic felt like a weather report, like a priest blessing everyone in sight in an orderly line but quickly to get on with it, the panic didn’t feel like the waves but like the wake of the ship, its motor cutting through the waves and making its way.

We arrived on the island. We needed to make our way to the interior, where they wouldn’t even ask us for our names. We were the only ones sleeping there. The person who owned the house said the door would be open, that our rooms would have a view of the water, that we could make ourselves some tea, and get situated.

Katie Peterson (USA, 1974-). To read more about the author: http://www.poetryfoundation.org/bio/katie-peterson

Image cover: Can We Live Here? Stories from A Difficult World (image from the exhibition), by Young Suh and Katie Peterson