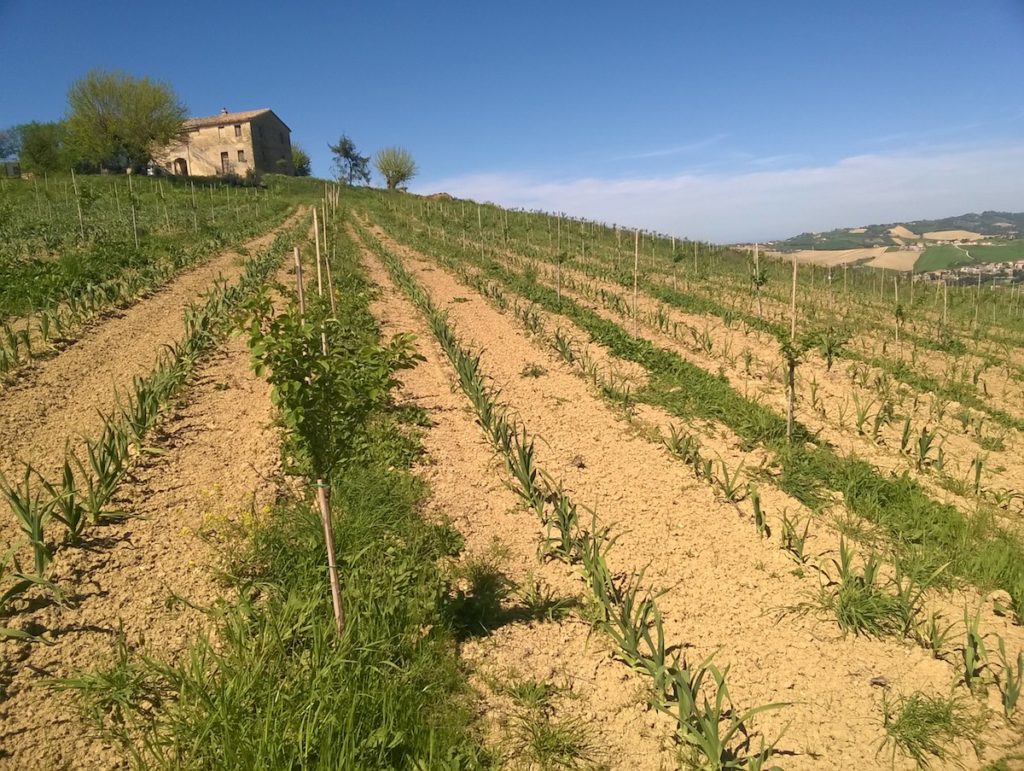 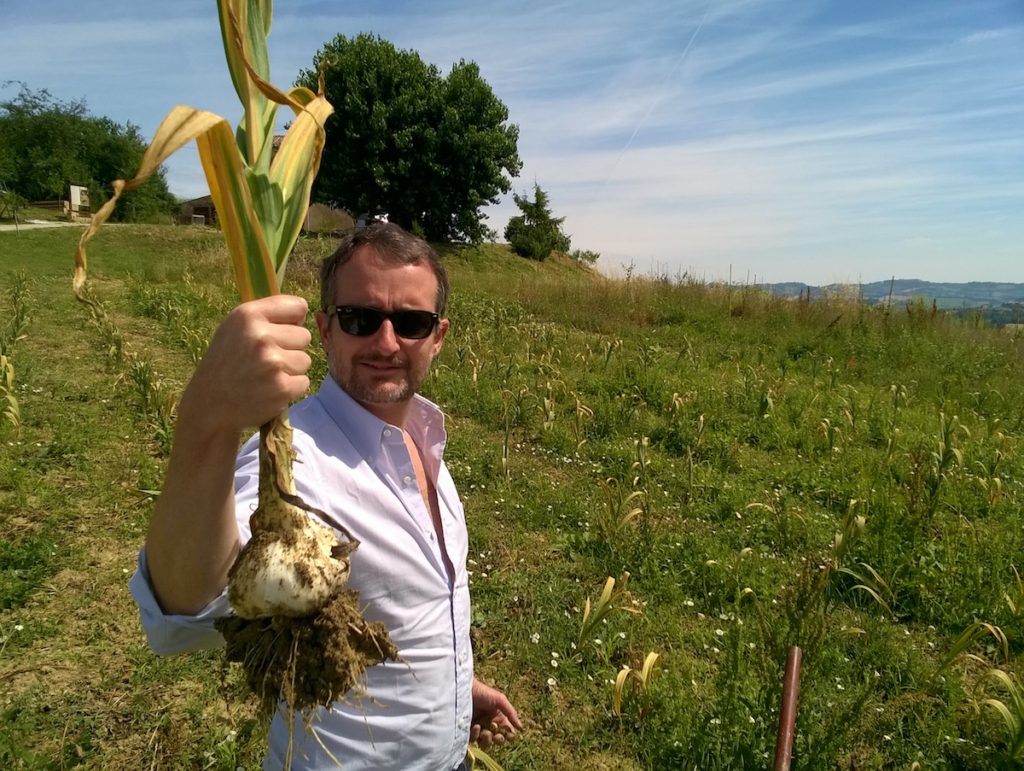 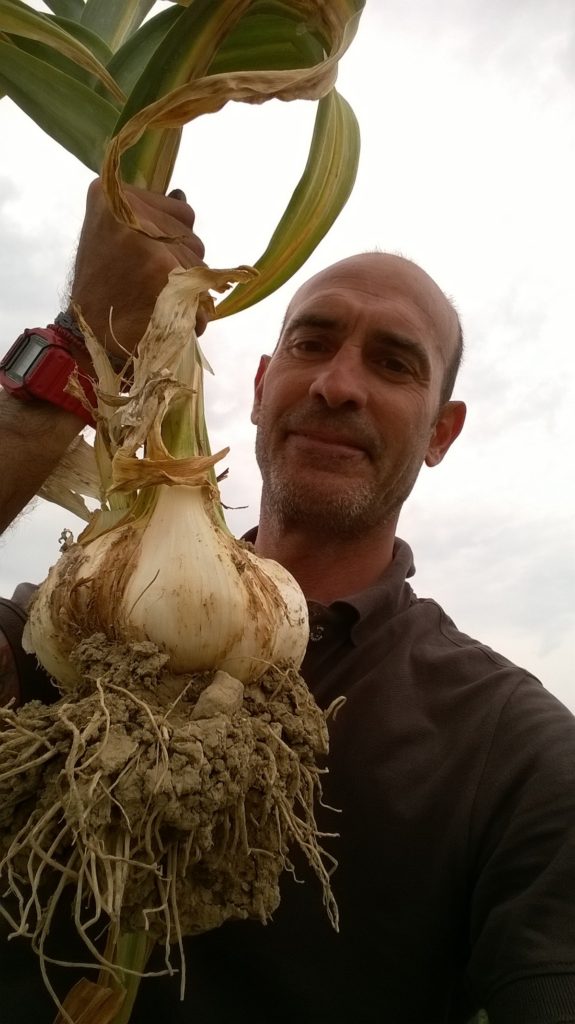 Your story (biography) in 10 lines with a specific hint about your origins.

Alessandro Guagni: I was born in Rome where I studied at Liceo Classico and then graduated in civil engineering, since 1999 I am an entrepreneur in the building industry with a special focus on interior design. I am married with two daughters, I love my family and my work and I do not have so much free time. Nevertheless, it is long time I was wishing a new challenge that can be at the same time another entrepreneurial activity and also an amusing time.

Lorenzo Bianchi: My parents are from Marche Region who moved in Rome. I was born there on May 12, 1959. After classic studies, I took a degree in law. I did my military service by preparing the exam to become a lawyer. I am a lawyer since 1996 and I am dealing with commercial law. I am married with Michela since 1999 and we have three children (Camilla, Rodrigo and Giorgio) and a dog (Kobe, as Kobe Bryant).

Your idea of agriculture (and of cooking) equally involves eyes and the pleasure of recalls, your inner recalls but also the recalls of nature and places and traditions.

Alessandro Guagni: Kissing.lab, the company that holds the brand KissinGarlic, represents for me the possibility to work in a totally new, and engaging, context: by being in contact with nature and its ‘slow’ rhythms; in a food retail sector very thrilling for me. All in all it is a great challenge that first amuses me and then, unexpectedly, is becoming a business. I cannot say to come from a familiar agricultural tradition…but I feel the call!!

Lorenzo Bianchi: Yes. In short, we want to make a wonderful, elegant, natural and nutritional agriculture by returning back to the Italian tradition.

For instance, if a visitor comes to our plantation, we wish that s/he is surrounded by the beauty of the place, by the plantation and its smells and that he can know how we produce. We want him to be involved in the simplicity of the farmers tradition, the one cooperating with nature, not the one pretending to dominate or to rape it.

How did you start as agriculture entrepreneurs? Which has been the inner spark to re-invent such extraordinary, and primordial, activity as aglione and why at Conero?

Alessandro Guagni: The spark has been easy and all happened by chance: I was spending a holiday in Tuscany and exactly in Val di Chiana, I saw on a stall several bulbs of a gigantic garlic. These bulbs vary from 200 to 600 grams while the common garlic can weight 40/60 grams. I was curious and bought a bulb then I tasted and was astonished from the fact it is having a very light and captivating taste. It is slightly spicy and not so persisting. I called Lorenzo, a very old friend of mine, who also tasted it and told me: ‘it is super tasty!’ We found it wonderful: a wild produce (not created by the man) so natural, that attires for its size but especially for those not loving garlic and not able to endure the consequences to eat it….so we decided to cultivate it!!! In this way we started our activity three years ago and so forth KissinGarlic is born – the garlic for kisses.

Why in the Marche region? Because my friend Lorenzo has a beautiful land there, at Monte Conero, and from there we started!

Lorenzo Bianchi: My father left me a small domain close to Conero. It was substantially an abandoned area. So I studied for two years and searched for something to do with it in an enriching way.

I was and I am convinced that the region Marche has the same, or even more, potentiality of Tuscany that is considered abroad as the farm holiday destination par excellence.

After my studies, I planted a wood of 3000 trees of wild cherry (so called, in Italian, amarena – black cherry – or visciola, sour cherry), a forgotten and rarely produced old plant part of our tradition.

From this we started. Alessandro found the kissing garlic and we started to produce it. It is hard but we liked it, and we still enjoy. Agriculture excites us so far that we are also developing other projects, all centred on the forgotten Italian traditional produces. In the most natural way: to give back to the produce the honour and the excellence of the made in Italy.

Which is the most important achievement you obtained as entrepreneurs and which is, on the other hand, the one as the more intimate yourself?

Alessandro Guagni: My entrepreneurial life is so full everyday of important results and of hard-earned victories but also of ‘icy’ defeats. I would not be able to identify a specific result after 20 years of business but maybe the best satisfaction is when looking back and see how much you built, how many miles run, how much passion, how much challenges.

Lorenzo Bianchi: Nothing in particular. Many people told us that we are doing something important and that we are very good…But, at least for me, the most important result is to have realized such agricultural performance. When I stop and sit on the field, I look around and remain always astonished from what of beautiful and positive you can do from zero to: 1) an agricultural plant; 2) an agricultural company; 3) business administration; 4) consumers’ satisfaction. And of course, behind each of this four points, there is a world made of work and passion. And the most extraordinary part is that neither me or Alessandro were agriculture experts.

What your cities are giving to you and vice versa?

Alessandro Guagni: Any city can give me incentives and cues…vice versa I do not know…

Lorenzo Bianchi: I really have such short time to give and to receive from the city.

Alessandro Guagni: I love everything, without any specific preference. I am touched by those chefs finding the rare alchemy between tradition and innovation.

Lorenzo Bianchi: I love all the cooking traditions: when I have the chance, I like to taste something new.

Alessandro Guagni: It is surely wine, often red and always Italian: from the north to the south, you can find absolute excellences.

Lorenzo Bianchi: Lately I always drink rosé wine. I like white and it is years I do not drink reds anymore.

Alessandro Guagni: I love music in general. I love historical novels and in this moment, on my bedside table, there is the history of Julius Caesar by Conn Iggulden.

Lorenzo Bianchi: I love all sorts of music. At the moment, on my desk, I have two books: one about Mediterranean wild flowers and the other about Middle Age history.

I read and study to search for new ideas.

On the flowers, it is easy to understand what I am looking for.

On the history, I am documenting myself to try to re-launch my native village, Offagna (AN), that has a medieval castle.

Alessandro Guagni: On a seaside, especially on Greek islands. Among the cities, for sure Berlin: weird but real…I go there often, it has a slow pace and continues cues.

Lorenzo Bianchi: Nowhere. If I do not do something I get bored. Then, when I am doing that something, I often think: when will I slow down? When will get more relaxed? I am so sleepy!

It is a struggle.

I am really able to slow down only on the field. I work hard, and always in a rush. I look around me and the plants are there still. I think: ‘ I run and I almost kill myself with the hard work and they are at the sun, still. They grow so slowly that I envy them. And so I stop to look at them. They are right, time passes always and anytime for everybody. But the difference is made on ‘how’ the time passes. So, to look at plants gets your life slower. And so you live more.

Alessandro Guagni: I like to think to have inventiveness and…unfortunately I am not patient.

Alessandro Guagni: I do not know, I always look further.

Lorenzo Bianchi: Time. It is all about time.