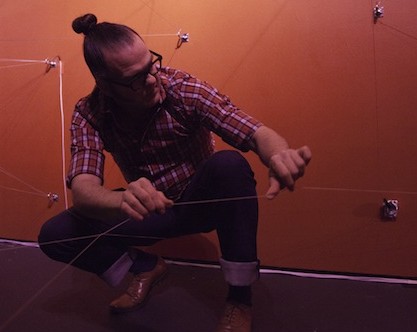 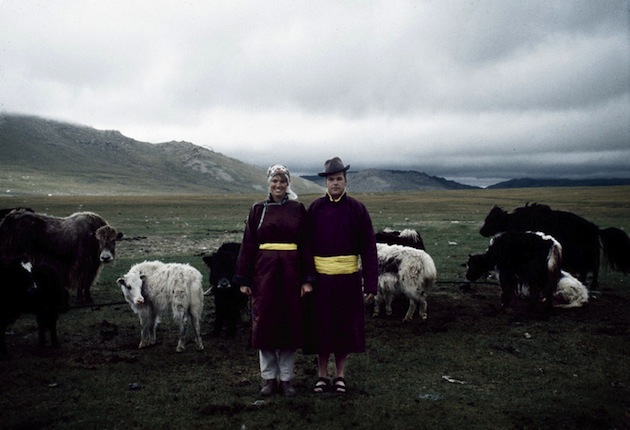 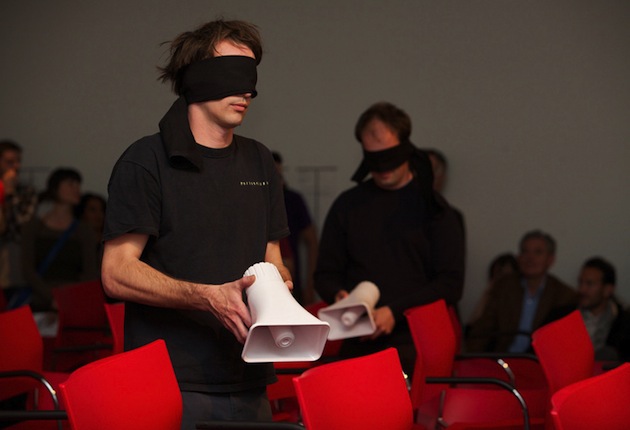 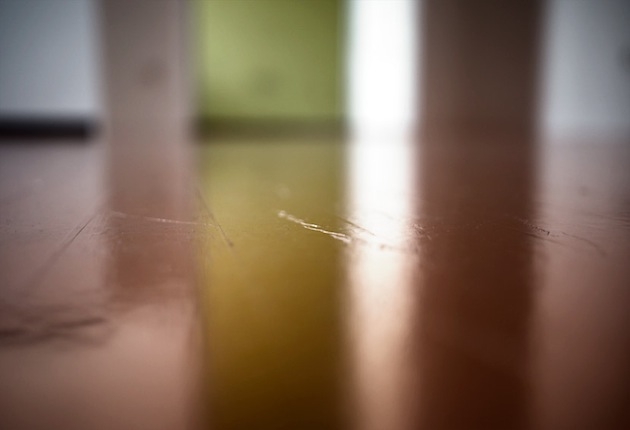 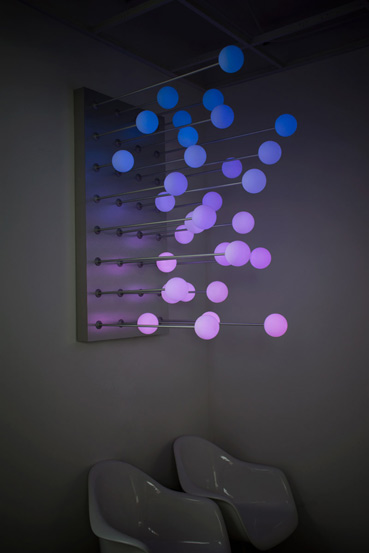 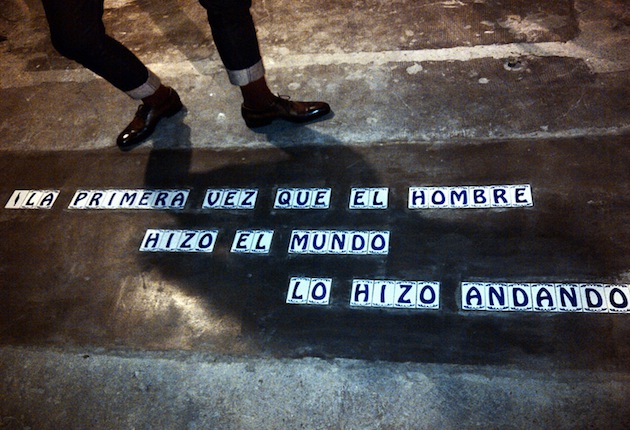 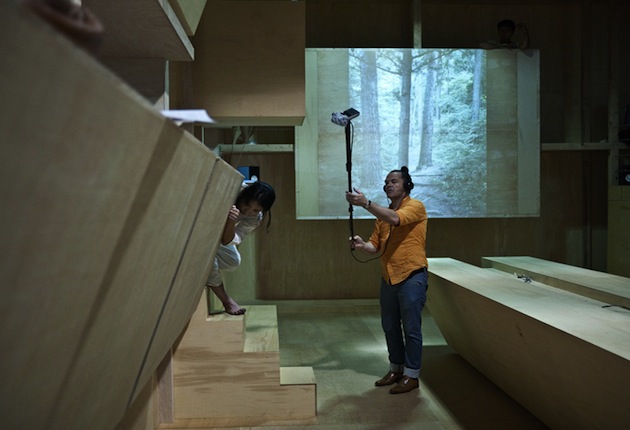 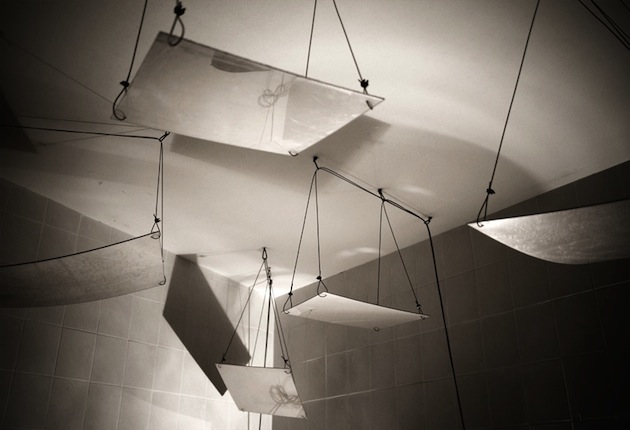 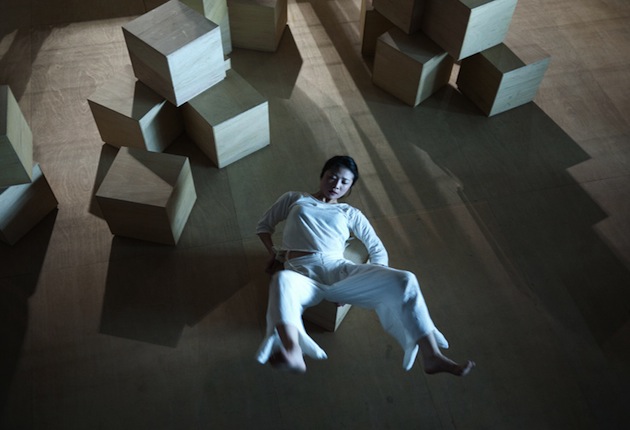 Sound-installation and performance artist who has worked across the disciplines of architecture, design, music, dance and theatre (with a past of manager and economics expert): this is Allard van Hoorn (1968, born in Leiden). We met a few years ago and after this encounter, I enjoyed following his artistic evolution, because he works “on creating visual, acoustic and spatial scripts and scenarios that investigate our relationship to public space”. And not only… somehow he is a living archive: his website allows any reader to see and listen just about everything of his work in real time wherever he is and to reproduce at home many of his performances (that have an instruction tool to be set in the same way he did in museums or galleries). He also actively works on durable pieces that can be also filed under the “design” label as, last but not least, a copper floor he did in a Munich gallery (pictured in the media gallery of this interview). Or a gigantic LED forest of bulbs translating in light the variations of the sky over an Icelandic volcano (via an online capturing server), presented at the reopened de Appel one year ago.

Recently, he has been on show at: the 2013 Istanbul Biennale; the ongoing Biennale for Urbanism and Architecture in Shenzhen; Centro Centro, Madrid; MaCRO, Rosario; Rosenthal Contemporary Arts Center; de Appel arts centre; Storefront for Art and Architecture; Hear it! at the Stedelijk Museum in Amsterdam; the Gwangju Design Biennale; Pinakothek der Moderne in Munich; Gasworks in London; the Museum of Contemporary Art in Shanghai; the Van Abbemuseum in Eindhoven, the Netherlands; Museu de Arte Moderna da Bahia, Salvador de Bahia, Brazil; The Moore Space in Miami; Museo de la Ciudad de México; the German Architectural Centre (DAZ) in Berlin; the Zendai Museum of Modern Art in Shanghai and CCCB in Barcelona. He has been featured in publications like the books Kapital K _ A Classless Character by Onomatopee, On Barcelona by Actar Publishers and Strategies for Reaching the Millennium Development Goals by BigPictureSmallWorld Inc. and the Buckminster Fuller Institute and a variety of magazines. He is tutor at the Architectural Association Interprofessional Studio and guest tutor at the Royal College of Art in London and The Sandberg Institute in Amsterdam. He has lectured on art as well as organised workshops and panels for, amongst others, Rijksakademie Beamclub, Amsterdam; Gasworks, London; Hogeschool sint-lukas, Brussels, Belgium; the Museo de Arte Moderna in Salvador de Bahia; the program Pensando en Voz Alta in Puebla, Mexico, organised by Fundacion/Coleccion Jumex; at Sheffield Hallam University and the university for architecture UIC / ESARQ in Barcelona.

In February he has been appointed Focus Artist at Art Rotterdam 2014. Concerning his 2014 program, he will be residence artist at ISCP Open Studios (New York) in November and part of two collective shows with his project Urban Songlines.

Until August 14, he will be at the Rosenthal Contemporary Arts Center (Cincinnati, USA) with other great creators as Los Carpinteros, Monica Sosnowska and Hector Zamora plus several local dance groups, where he will turn Zaha Hadid’s ‘Urban Carpet’ design for the building into a marble game with giant weather balloons. He will be making live music out of the sounds created by the description of the building during this choreography, as the dancers re-perform the building to which a musical voice has been added.

And until October 14 his Urban Songlines will be at CentroCentro (Madrid) where an art and architecture exhibit having as subject an empty building, a former cinema hall called Cine Bogart located in the city centre, will take place. Allard translates Cine Bogart into music using the score of the last movie played in the theatre: the recordings of the footsteps are mixed in order to retrieve the empty space that held the celluloid.

Globetrotter artist, you practice that particular philosophy of making and designing pieces of art by starting from your body. And you do it not like many performing artists of the recent past or present times, but in a social and densely actual body of statements and actions in the wider area of life, especially pointing on space, spaces and cultures, music, visual identities and theatre. Is art for you a relationship with mankind, within instances and feedbacks that integrally compose the piece of art rather than a white cube activity in a more “aseptic” environment? Therefore, which is your ideal audience and your ideal collectors?

The way I want to create art is that from an energy perspective the work should specifically be related to a place. By reflecting on the social, political and historical features of a place, I can analyse it and am able to turn it around in order to allow us to look differently at it. In this way, the public spaces I research are given a new voice that rethinks our relationship to them and rethinks a possible new interaction with, and uses of, them. Audiences are therefor sometimes stander-on or passers-by that not necessarily have to encounter, recognise or experience the works as ‘art’ but rather as a tool to re-define their relationship with their environment. Collectors of these events or experiences rely on documentation, photos and videos. Sometimes they are props that frame these newly created ‘legends’ of the places that are researched and processed through my interventions.

Is your interest ranging from architecture as the natural space of human and political interference to aesthetic urgencies, or is it originating from your previous experiences as a manager and economics expert that allows you to have a privileged knowledge of what is “behind” human actions and social forms in Western world?

Actually, it is the opposite of the things I learned earlier in life that drive me to understand our relationship to our external self, our living spaces, our shared environment in which we all co-exist and collaborate. Architecture is one interesting end of the spectrum as it is a static and daring manifestation of our development of our world, monuments to our times and technological demonstrations that lend themselves very well for translations into dance, music, theatre play, playgrounds for skateboarders or other dynamic interpretations that allows the shift of perspective… Having known what rigid is, I easily recognise the shifts in public space and its topographies.

You are a tireless traveller and you believe in residencies as true form of art: can you tell us more of the state-of-art of this special practice? Is it still valid for beginners or is a more suitable tool for experienced artists who have already a network with solid bases in which a “residency” is not just a vacant time to experience foreign contexts?

If researching local environments for local rules, dynamics and re-interpretations is the method or objective of the artist, then residencies provide a solid framework to work from. My first residency was as fruitful as the current one, so experience is not what matters. If understanding and being able to work with a place, discover its ruptures in the fabric, then living there, being there, eating there, sleeping there, all helps to unveil and relate with the environment.

Which are your preferred projects of the past 5 years and the next one you are starting now?

I like many works for different reasons but mostly those which gave me the most surprising insights, reactions or reflections. My last work for the biennial in Istanbul created a very strong reaction in the audience. It was as if the piece allowed the people present to focus on certain emotions that were already there but which were not able to surface until then… I am continuing to search for new methods of shifting our understanding of public space and our relationship to it, and I will be looking at different methods of indexing and classification. Also, I am interested to look more closely at the formal roles and relationships that exist in the public space through cinema and theatre.

How would it have been different if you were acting not as Dutch artist? My question is related to the fact that in the past years in the Netherlands there has been a solid and serious funding policy able to “enable” artists to engage a more professional path in visual arts.

Having the Dutch funding system behind you helps but does not lead you to sanctity. I imagine that if you operate from a life’s need to investigate the world and make your art, you will find ways to do so.