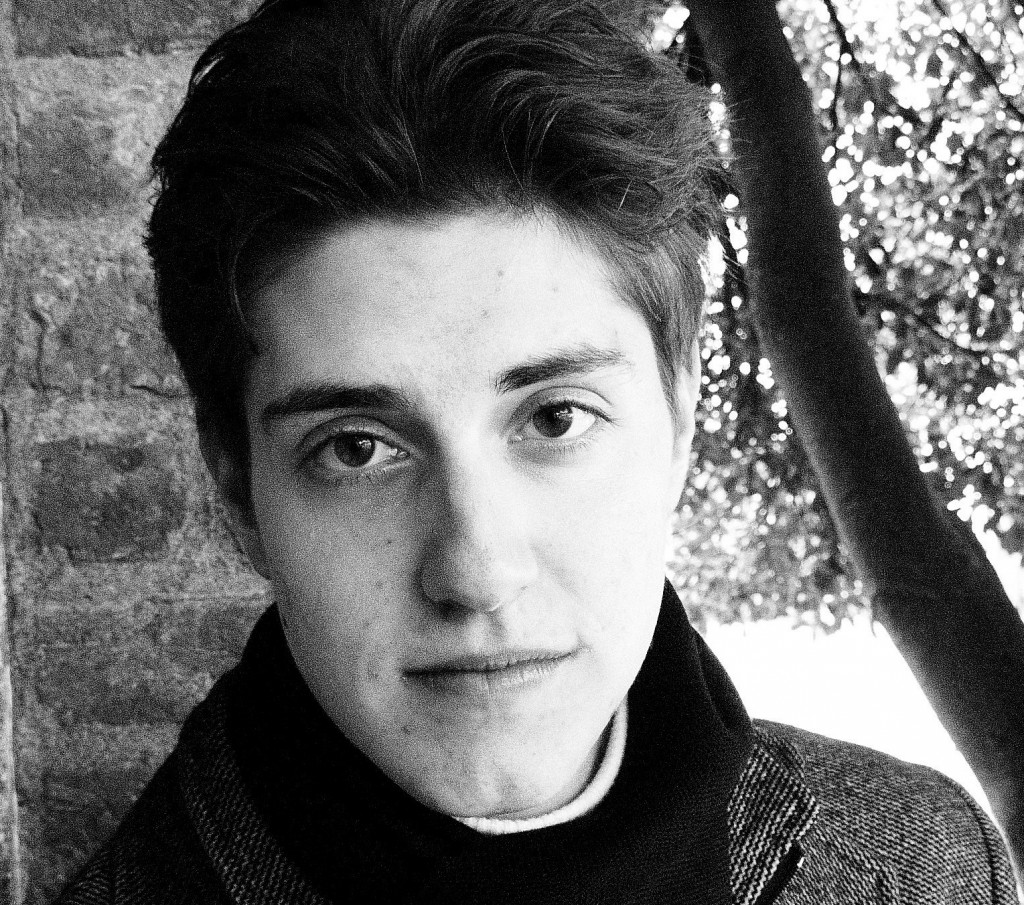 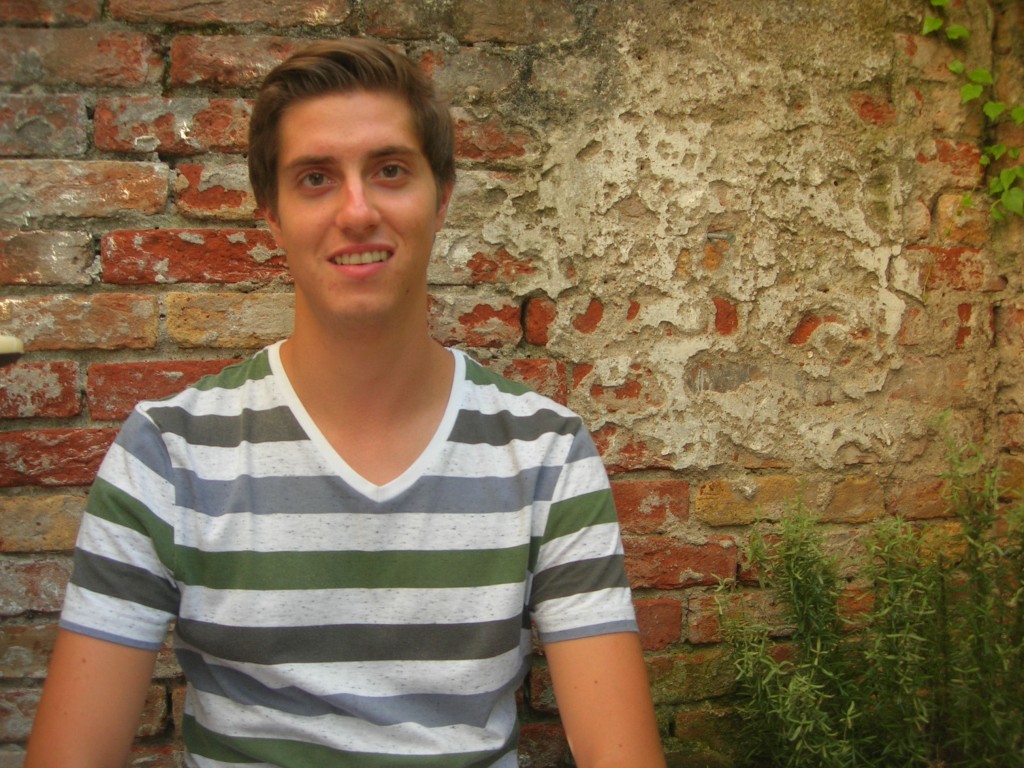 Daniel in Venice a week ago

Your story up to now.

I was born in January 1991. I come from a small town on lake Orta, in Piedmont, and I spend my childhood and teens there. I’ve never really felt like an integral part of my birthplace; neither have I shared the values nor ways of living of my area, centered on blinded and cosmetic religiosity and on the great importance given to sport. This sense of estrangement crystalized during my childhood in the systematic creation of an imaginary world and a series of kindred tales based on it. Often I would recount these stories to peers and teachers, receiving frequently a positive feedback. However, in spite of the label of writer, stuck on by friends and parents, I never got round to publishing neither the initial stories nor the lengthy chronicle written afterwards and completed at the time of high school. Curiosity and the sense of estrangement have instead pushed me to look beyond the borders of Europe and, at the age of fourteen, growing interested towards the world of Islam. Also the role played by my parents was of importance, we travelled to many countries outside of Europe where I opened up to the idea of other realities. What was initially a fascination for the ‘exotic’, became a passion, pushing me to read some of the most important writings to be found among Persian literature. In particular, the didactic Golestan by Sa’adi and the epic poem Shahnameh by Ferdousi have taken part in shaping my tastes and my interests all throughout my teens.

Despite the moral opposition from parents, relatives and friends, who shared the same prejudice towards a foreign and uncivilizedculture, I decided to study Persian and Arabic at the university and moved to Venice in 2010. Here I nurtured to my contentment not only my passion for Persian literature but also my interest for art and music. Prior to finishing my three-year degree I finally end up living for a month and a half in Tehran, where I join a Persian language course. During this stay in Iran, where for that matter I’d already been with some friends and course colleagues the previous year, I ended up going to one of the places mentioned by Ferdousi in his Shahnameh, the Damavand, which I’d been dreaming to see with my own eyes since the age of sixteen. Once graduated, I finally choose to take a few months for myself to decide about my future and I decided to use the languages learnt towards a more concrete objective, in other words to apply them to an economics sphere. So I send in my application and I’m admitted to a Master in Management at the London School of Economics and Political Science, which I’ll be attending from September onwards. At the moment I’m attending a classical Arabic course in a private school in Rabat, in Morocco.

What has your city offered you and what have you offered her?

Each city I’ve lived in has passed on to me some values and awareness. The city I was born in made me recognize and accept situations different from my own and help me understand what I don’t want to become. Venice, that I love, on the other hand is the city which has given me independence, it has sprinkled me with culture and enriched me with its beauty. At the same time, this city has taught me to look beyond appearances and facades (in Venetian palaces only the facades are decorated while the side walls are flat and lacking any pinchbecks) and work out things in their substance. In return, on the other hand, I’ve tried to offer something of mine to the city, for example proposing Persian texts for the reading series La Casa delle Parole or else collaborating in various events. In truth, I’ve the remorse of not having done enough. Tehran has offered me the warmth of its citizens and their hospitality. Iran is a country rich with culture and human kindness and living there for a month and a half has certainly enriched me. In Tehran I also felt what it might mean to be controlled by a nationalist government and dealing with bureaucratic problems. A good organization is fundamental to do anything without losing precious time, something that is lacking both in Iran and Italy! Rabat has pleasantly surprised me with its calmness and European atmosphere you breathe in some of its neighborhoods. And the food is great! I trust my next city, London, may offer me a mental opening for an international environment and its numerous opportunities and – why not? – new cues to define my objectives and my future career.

What are you missing as a student and what on the other hand do you have?

Economic self-sufficiency is probably the element I miss the most. However life as a student offers me cultural stimuli, which can take part in steering my interests as well as a lot of free time to nurture these interests.

Mashed pumpkin and veal tenderloin cooked in green pepper sauce are my favorite dishes, even though I like tajin (boiled vegetables with meat, cooked inside a ceramic container called tajiniyya, typical of Morocco) and fesenjun (duck served up with nut sauce and pomegranate, typical of Iran). I don’t have a favorite drink.

What music do you listen to and what book are you reading at the moment?

I like a lot the music from around the romantic period. Among my favorite composers I mention Schubert, Franck, Tchaikovsky, Rachmaninov, Mahler and Liszt. I don’t appreciate Mozart that much, too sugary. Lately, after recommendation from several friends, I’m also listening to a lot of baroque music. I’m now reading Demons by Dostoevskij. I really love Russian literature.

I don’t give up when confronted to difficulties; I’m really stubborn if I really want to obtain something. However at times I lack resolution in what I do.

I’ve learnt that the world is constantly moving and both situations and people change. Therefore relationships and passions become modified. The person who’s a friend today won’t necessarily be one tomorrow and what seems to be the goal in life at a given moment can become strange and even ridiculous when looking back just a few years down the line. Nothing lasts forever and it’s only normal that following pleasant periods come moments of deadlock and crisis. Luckily the opposite also happens. Consequently, I try to look at what is happening from this perspective, savoring and living full-on every moment, in the knowledge that this is only an instant and may not repeat itself ever again. In addition I’ve learnt that honesty and sincerity are at the foundations of any real relationship and that true connections where we act wanting the best for the other are a value, which in the absence of other more religious or motivational in nature, may give meaning to life. In the end I’ve realized that most of the time we’re worried with problems which in truth don’t really exist but are only a projection of our own mind, and we lose in this way track of the real problems; in other words, we’re all set to die and what we’re tending towards relating to external factors, like a brilliant career or success, on the long run has no sense whatsoever. The loss of a dear one and the reading of The death of Ivan Ilic and Father Sergej by Tolstoy where inspirational with this respect. Consequently I try to live by placing above all what I believe to be true values: having human relationships of quality and giving to others what may elevate them. Unfortunately it’s very hard to act this way: the amount of stimuli that tends to lean towards the opposite direction is very high, especially in our society.