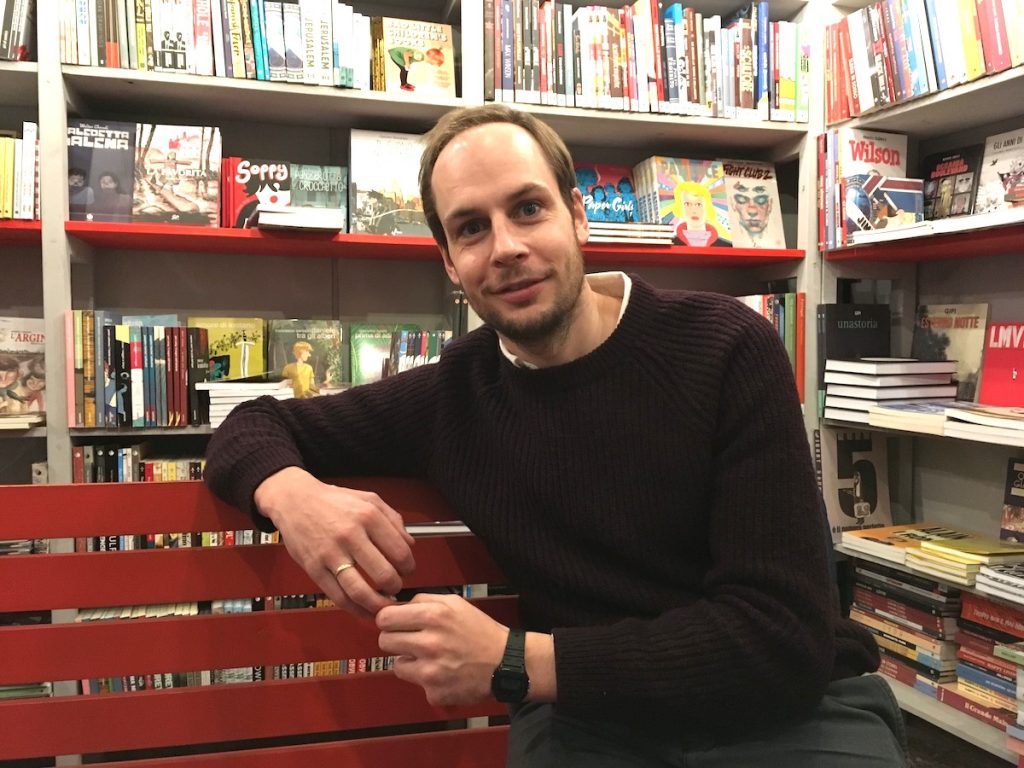 This week #slowwords comes to you with a very special story, Mr Harry Parker’s one – a British soldier, son of soldiers, becoming a writer.

We’ve met him during a very crowded tour among Italian bookshops located in big and small towns within the occasion of the publication of the Italian version of his first, extraordinary and uncommon first novel (Anatomy of a Soldier, Faber&Faber, London). To be short, this book is the first one to deal with the ‘spiritual’ anatomy of things (things, not people) and is such a perfect render of the mute noise the author felt during his new Alpha. You can read chapter 9 in our short stories section.

I was, I admit, quite shaking…I was not able to stop thinking to his personal path behind – and beyond – the literary bravoure. He has been almost killed by a blast of a mine in Afghanistan when he was serving there in a mission for the British Army. He was saved, he learnt how to walk and how to speak again – and then he changed life.

Your story in a few lines – arriving just before the blast, with a hint on the childhood and on the ‘destiny’ your family embodied in your roots

My life in a few lines? Oh God! I was a true soldier, serving in the army from about four years. Before that I’ve been at the art school, I had a sort of normal upbringing in the United Kingdom. I’ve got a slightly older brother and I was born in 1983.

From the blast to the blast (yes, you’ve read well): I think there is a long or better ‘absolute’ interval in which you’re between here (life) and there (death). Do you have any specific recall of it?

If you could associate a colour to that moment of your life, which could it be?

When you studied arts, did you have in mind in general to work in the field as…

An artist, not as a curator. I paint and draw, but at the moment I mainly write.

Anatomy of a Soldier is your first book. Do you prefer to define it a novel, or rather a collection of stories?

For affection, it’s a novel for me. I mean, I think, each chapter is yes dedicated to the life of a particular object, but is intended as interlinked and mirrored in any other of the book. The book has a definite narrative and a narrative pace.

You as reader before writing your first book Anatomy of a Soldier: which ways, which places and which needs?

I loved a lot a writer, Iain Banks – and everyone at whom I mentioned him were not knowing him so much (he is a Scottish mainstream fiction writer who writes under two names, Iain Banks and Mr Banks). Hemingway also, a lot. I read lots of commercial thrillers as well. Since I was starting to writing, I think to have been more conscious about how what I read is done.

Actually you’re starting writing after a strong biographical happening. What can come next?

I did have a very autobiographical story to tell, but I did not want to tell it. I was looking to at anyway to not to tell my story. That’s one of the reasons for which I use objects to tell stories in my book. And there is also another completely invented story about a local insurgent population. I always enjoyed in writing more these bits of book rather than the more ‘personal’ ones.

In terms of my favourite mean, I write short stories all the time. And I’ve just finished to write the first draft of another novel, it is about cowardice but is not involving soldiers this time.

It’s a hard question because is your first book, but I ask: which can be your favourite reader?

Sometimes people write and sometimes they talk about who are writing the books for. Once I heard a writer telling that he was writing for somebody flying from London to Shanghai, that’s about how long you need to read his book. I write for myself as much as possible and am not worried about whoever reader can meet me. Of course I hope it can be read as wider as possible. And it’s always nice when somebody who does really not know much about the army, read my novel and enjoys. I never thought it as a war story reading. But when you’re thrown in the market you’re labelled as war fiction. So, for me it’s nice when I hear people saying ‘oh I never would be picking this book up, but…’

Has the book a dedication on the cover?

Yes, to my mother, father and brother.

Will you have in your radar the idea to return to work or to cooperate in some way with the Army in the future?

I stopped the service in the sense that I’m not any longer a soldier. I still see my friends who are in the Army, I still work in some military charities sometimes. I’m still involved a little. But my life is very much about something else.

In the Army you have a very cooperative life, lots of fellowship…Writers are on the opposite side: they’re very solitary beings and the loneliness is a constant in their lives. Which encounters do you normally have in your actual routine, since you’re a writer?

Yeah, I have my family, and obviously my friends I go to see quite often. For me the loneliness can be quite important actually, because I am not a writer all the time in that solitary habit. When I am at a very good point and I’ve driven the story forward where it is needed, I can be more sociable. When I try to be creative or to fix a problem, almost an odd experiment in my head, I’m very much in that world and have to be alone. Otherwise I have to engage in the world, it’s there you find more material to write.

What your city, London, is giving to you and vice versa?

When I go to a little town or in the countryside, everyone stairs at my legs, asks about my legs – what happened, what about my prosthesis. When in London, I’m just another freak around, as many others, I really like that. London is unlimited. What I give to London as one of the about twelve millions people living there? I’m not sure. Smiling to everyone… that’s enough!

I love cooking, because it reminds me the state of flow, it’s an activity where you do not have to think so much. Anything, I love anything.

Which is your music and/or the book(s) with you now?

I listen to all sort of music, when I write I tend to listen to classic minimalism. I listen also, for instance, to Bastille today…As for the book, at the moment I travel with Pincher Martin by William Goldin (a British novelist). Do you know Lord of Flies? William Goldin won the Nobel Prize with his first novel.

I love to be musical in some way, which is the reason I listen to any sort of music.

I think I have a talent for imagining.

Harry: And which is your talent?

Me: Actually is a good question, I asked that to myself many times always without reaching a single conclusion, that’s why I assumed to do not have any talent at all…

Me: Because lots of other people know how to write, how to make pictures, movies – all at once. There is such a good amount of multi-skilled people out there, especially youngsters.

Harry: Are they multi-skilled or are people who are in an environment getting them to try anything?

Me: They’re doing that yes, but they also achieve results…

Yes, but I think that you have to be provided by a gift, a natural and inner gift that comes within your birth.

Harry: Yes, also…but the gift is often much more than what the people think. Take myself for instance. I was dyslexic and find harder to study in the maths and English departments, but I found easier to stay in the Arts department because it was easier. I wasn’t born able to draw, I was just spending lots of time to learn it.

Me: You mean you’ve so achieved that ‘ability’…

Harry: If you start when you’re five and you keep on going….

Me: All said, I could be a good listener, maybe – not more than that.

Harry: That’s one of the best talents possible…

Me: What have you learned from life until now, before and after the miracle bringing you back to your beloved friends and family?

Harry: Your questions are just like the bigger questions one happens to be asked…

Me: I learned zero from life, but do not repeat the same mistakes…and I’m grateful for that even if it took more than 40 years for that

Harry: What I’ve learned…When you’re lining face down in the dust and you’re dying, it is the loneliest thing in the world (it is also painful, yes, but all the pain manifests itself by being alone).

Now that I live my life again, the thing I really cherish is human connections with people…Being just as flesh it can be lonely, a very lonely experience for anyone. Even if you’re in a relationship or you’re in a nice family, it can be a strange thing being contained and do not understand what others are thinking to in that moment, there is a madness in that.