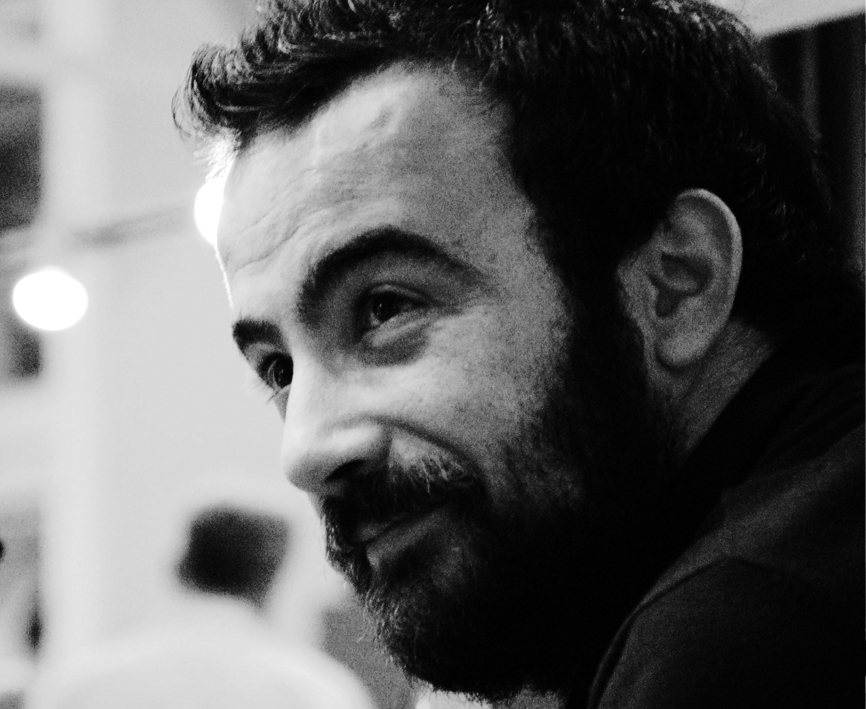 To the west a huge sunset, the orange sky so dazzling; in front a gigantic, pink full moon rising – and a conversation aboard a ferry loaded with “humanity” moving from Procida to Naples.

There is a very diverse group of people united by a friendship that seems to be very deep. Something more, for sure, that is not to be explained, which rather comes from real smiles and a bit of melancholy.
They are all in the South, mostly from Calabria, and they all live in Rome.
The group that I’m telling you about went all around the island with their scooters, walking restlessly, day and night. There is something to celebrate and something to remember between dried salt and a sense of fulfillment. A stroll through the narrow whitewashed streets climbing up to Solchiaro, and moreover Terra Murata, projecting the gaze to the horizon, as if trying to keep it all for oneself. From Ciraccio and, before that, by the slender black beach which is found passing the marina of Chiaiolella. Up to Girone.
Music, dinner at midnight, a birthday party on the terrace, a dive from the rocks of the Lighthouse and finally heading to the beach Pozzo Vecchio.
One of those inseparable friends works on something that we like, which holds the pieces together and even more tenaciously the memories and the souls.
As the sun shuts its doors for a moment, just for the day, and as the moon takes center stage, we sit – like the rest of our fellow and noisy travellers – up on deck of the ship.

Your story in ten lines. Key facts with a hint of romance …

My name is Luigi. I was born and raised for 19 years in Fuscaldo, a small village in the south of Italy, in the region of Calabria. It comes from Latin: fons calidus (it had, in fact, a hot spring located on its borders).

In what year were you born?

Aries?
That’s right, the first day of Aries and the first day of spring! Indeed… mine was a happy family, we were a bit like the Robinsons. Second of four children, three boys and a girl, I have always been a bit over the top. Very curious and with a strange penchant for trouble and for some good story to tell and listen to. The South is full of beauty yet is also is no less violent and damned. Like it or not one grows up even in situations that are not always easy. Then of course there are those who pick a side. I drove my parents crazy a bit when I was a teenager but I have always cultivated my passions that have also become, in large part, my job.

You then moved
I moved to Rome to go to university at 19, even though I never graduated. I don’t know when I realized that I wanted to be a journalist, but for sure I was always attracted to the unfolding of events happening. At first, via the publishing house we were able to write and document what we wanted without the need for anything else. Then it is also true that I have always loved to read. Books have always been a bit of a refuge for me, despite my inclinations of always wanting to put together a lot of people and the desire to listen and communicate.
There are books that you carry within. In the same way or even more as some people I have met.

What did you do after college?

I started almost immediately as a journalist writing for national newspapers, both mainstream and online, (in Rome it was quite easy at the time), but I was mainly working with video. I was editor-in-chief of the university newspaper, but after a while that paper could no longer exist where it was – essentially because the university could not control it – therefore we decided to continue on our own by founding a small publishing house which would edit it online. We had over 5,000 hits a day, it was getting serious. By that point we had almost completely left university life aside. . he was read investigations, music, culture, art Starting with Rivist@ and later on with rivistaonline.com we had the idea of ​​creating the Round Robin Publishing House that today produces around 18-20 titles per year: literary journals, a bit of fiction by young and emerging authors and in the past few years a lot of graphic novels as well. After a year we had more than 70 employees who wrote from all over Italy. Italian affairs mainly, although we were very curious to what was happening abroad. In recent years, we have shifted the focus over borders, not only publications. The publishing house has started a dialogue with authors and publishing companies working in other parts of the world. Countries where literature plays an important role and cities that fascinate us and where we often go back to present and promote our titles: New York, London, Berlin, Frankfurt, Brussels… mostly we haven’t moved much from Europe and from the western part of the world, yet I don’t rule out that we can go elsewhere soon.

There is also a library that supports you?

The Library “Il Viaggiatore”, in Via del Pellegrino 165, in Rome. We stumbled into the possibility of reviving a historic, important library of the capital which was about to close down after the death of its founder and owner, Bruno Boschin. Perhaps one of the largest booksellers in Italy. By then, I had been looking for a newsroom for some time, a centrally located office, that would also serve as our library as well as being open to the public. Therefore we decided to reopen it, together with our friend Eleonora – who is also present on this ship tonight – in a larger space opposite the old one. Today, in Via del Pellegrino, in addition to the library, you can also find the Round Robin Publishing House, the headquarters of “Libreria in Viaggio” – which is planning a major literature festival from the Mediterranean to take place here in Procida in June 2016 – and shortly we will also have a small literary cafe.

What does Rome give to you, assuming that this is now your city? And what do you give back to Rome?

Rome is all of this. It has given me everything I have and all that will be, I have no doubt! I’ve been living here for years now: more than half my life – now I’m 37. What it gives back is a lot, although I must say that sometimes it tires me.
Sometimes I have to take refuge somewhere to look at the sea. Like today, Procida. We are all part of that little boy that we carry within. I also looked at the sea from the rooftop of my house in Calabria. Each of us, not just me, gives an important part to the city where we live in: according to the people we meet and the things we do. I wouldn’t be able to give you a better answer than this. I am also a member of “daSud”, an anti-mafia association dealing specifically with the most affected neighborhoods in town. I keep being a journalist, and I deal with social issues and investigations. Perhaps, yes, that’s what I give back: I try to raise questions to my city hoping to find the answers.

A nice thing that happened to you recently?

A talent that you have. And one that you don’t you would like to have

And you’re not a writer?
You should ask to my readers, not to me. Don’t you think so?

According to you, is it difficult to start and carry on a business in Rome at this moment in history, and more generally in your country?

Extremely complicated. There is no support or incentives for small businesses whatsoever, and I’m not only referring to public institutions but also to other companies or professional associations. What we do, we do it out of passion – in just over ten years we have gone through three huge periods of crisis and we’re still standing. But this did not prevent us from moving forward, to keep on organizing events and to keep on travelling. The festival I was telling you about for instance, if all goes well, we will do it next year here in Procida. At the end of the month in London we will present one of our latest works, a graphic novel which tells the story of a case of corruption beetwen the Niger Delta and some European institutions. And then I think Paris and Brussels for some other books and a couple of things up my sleeve…


Any music or books keeping you company at present, perhaps haunting you? Where do you keep them?

The book I am reading at the moment is in the bag that I carry with me and it is by Donato Carrisi, a young Italian writer. Extremely talented, in my opinion one of the best suspense novelists.
I love the genre, I can’t help it. From Marseille Izzo, who I consider a beacon in the night, to the nordic Carlotto and lastly Maurizio de Giovanni, to name a few.
Music: during past month and a half, for reasons I won’t tell you, Casino Royale.

Cooking is the future I’m aspiring to. I love food and luckily I like to cook. I find it one of the most rewarding things, together with little else as a matter fact. At this time I would only eat paccheri as they make them in Naples, like nowhere else, with some cherry tomatoes, oven baked black olives from Calabria, capers, a bit garlic and a lot of fresh basil. All cooked in a pan over low heat with some olive oil. In order to give justice to the coming summer.

A favorite drink
Beer, weiss and blonde, above all. But also chilled white wine.

What have you learned from life so far?
That we must be careful, observe what surrounds us. We should trust people but never lower our guard. All there is, is here and now. We live day by day trying to build something that we like.

Translation by Michelangelo Miccolis – this interview has been realized on 2015: we republished it on december 2019 within the occasion of the forced closure for crazy renting fees of La Libreria del Viaggiatore which is therefore organizing its last month of opening, debates and …bargains.