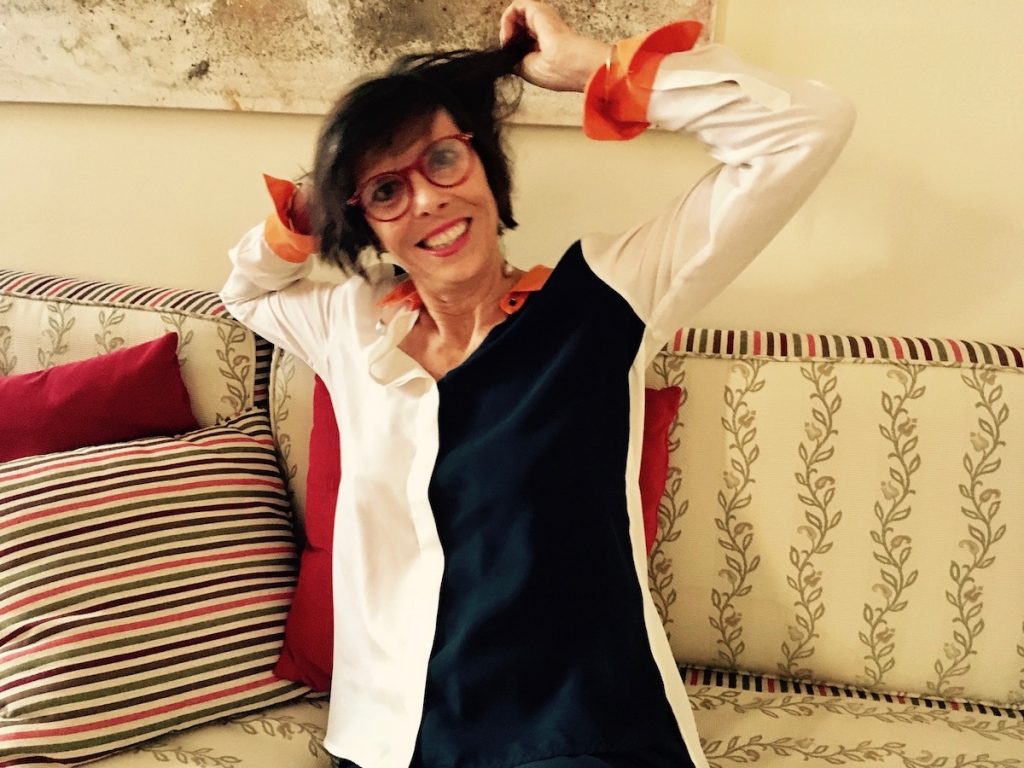 My father began his experience as a publisher in Milan and we – my mother and my three sisters – moved at the time between the two cities until, at the age of six, we moved to Tuscany, near Florence in the countryside where I still have a base and where my father settled his publishing house – Scala, the largest color photographic archive.

I have always breathed an extraordinary and stimulating climate.

On my “Italian” life I would add that it took place between Padua, Venice, the Euganean Hills and Florence as per family, birth and tradition. I then lived seven years in the United States, a year in India, almost a year in South America. I traveled a lot and I returned to our country at 29-30 years and since then I have rooted myself in Veneto. In the last 12 years, precisely in Venice.

Why not Milan and Rome in your Italian trajectories?

Both are cities I loved and love so much but which keep escaping me. In this life I had chosen Venice and surroundings – and Florence and its surroundings.

I have to deal with inherited assets, a very demanding job; I don’t deal only with artistic activities.

Before talking about your work as a writer I would like to talk about that of performer – even if they are closely related. For a long period of your life it seems you have kept more to that …

Let’s say that the dream of my life was to be an actress, a dancer, a singer. For the vicissitudes related to heritage – by grace or disgrace – I was not able to do all these things fully even though from a very young age dance and acting were very important to me. And in a second phase I became a singer-songwriter, I wrote several songs and that’s something I think I can do even later. I will write songs up to 80 years and for my great-grandchildren! It is a talent that I feel I have but must be cultivated. I recently did a recital and maybe it’s the most suitable form that doesn’t require exaggerated levels of performance. I often play with a guitarist or another voice. I also try to create small shows.

In contemporary dance I worked on choreography and I like to mix dance, music and theater. I still have a project in the drawer, even more than one! What I particularly care about and want to produce soon is related to flamenco. I have just been to Spain, it is a very complete dance and I would like to deepen it, even if starting to dance it in this life is late. I am interested in the ethnic dance and traditions of different countries, I would like to combine different cultures – or  those in a state of permanent war – in the same show: for instance Spain, Turkey, Armenia. Peoples who do not know or misunderstand themselves and who could meet in and through the dance.

No one knows that flamenco in Spain is considered as a form of Sufism, it has a very intense religious and transcendental side even if wrapped in a thrusting sensuality that instead Sufism does not possess in its choreographic expressions, nevertheless they resemble each other in intent.

The last of your books that I happened to browse is an illustrated fairy tale in an extra-large format that you wrote (taken from a true story) rhymed from the first to the last word. A contemporary nursery rhyme. Have you written other children’s books?

It is a true story told exactly as it happened. I was able to write it in one go in rime. So many times they asked me to write it and in a couple of days, with the right inspiration, I succeeded. I asked a friend (Davide Gabriele) to draw it: he is a young abstract painter who for the first time tried his hand at the illustrated genre. I published it with my publishing house, which is in-house to my non-profit company Ass. Culturale Le Pleiadi. I didn’t want to wait to find a publisher out there. And I gladly share this book with anyone.

And …what about your second novel? Do you like to disclose something? Do you have set a classic narrative and a plot that came down to the actual times?

Finally L’Orologio di Siviglia is over, I’d like to find a publisher.

It’s a contemporary story. It is more filled with action than the first novel: in this book I like to mix the social, civil, geographical and political reality of people with a mystical aspect. One of the protagonists lives, in fact, a mystical experience and this moment in history is autobiographical: I always seek for mysticism.

The protagonist is a young woman who takes a journey and part of it is a shamanic dream that I really had.

This transposition of a high and important dimension – almost the beacon of my life – is the heart of the plot. She has revelations, she lives this experience that I lived both in dreams and in experiences: the absolute, pure ecstasy. The union with the stars, with the cosmos. This state can be reached with extreme simplicity, even if via a twisted path: once there, you feel the awareness that ‘we’ are the universe.

It is an experience that I have had many times – both in dream and with meditation.

Again, it is not difficult to achieve it even if Catholicism precludes us from this dimension by forcing us to think about our condition of sinners.

Sin is a static dimension, which has nothing to do with awareness. Think of the child, who does not know sin yet: h/s* is in a permanent ecstasy that means, in simple words, perpetual adherence to reality. It is like a little brook gurgling. The mystical experience is exactly this and often we, in adult life, think we are no longer entitled to it.

The protagonist writes a guide to Andalusia, the story is tinged with yellow – or rather with noir – because she inadvertently photographs an encrypted message and her guide is sabotaged. In reality it is a narrative ploy allowing me to tell her life and her loves – history within history. She marries the companion of a lifetime and makes an unexpected – even erotic – encounter in London that appears again and that will accompany her on the mystical journey. There will also be a third man: you already understand that my heroine is a young and free woman who finds herself living three relationships.

Her husband is a journalist and I have to say that I really like having the figure of the reporter, a very generous and often fundamentalist character – even in the reality of life – just to get the best of things.

I don’t want to tell you everything: her husband will disappear, she will look for him because in the meantime she gets pregnant and doesn’t know of who. In the final part of the second novel I designated a link to the first one because the third meeting she has belongs to a series of minor characters in the first plot.

In my novel, of course, you would find what I believe in. I am progressive, pro-European and strongly pacifist. I hope to give as much support as possible in the dark times we are living – although the novel is very much drenching in the ecstatic experience I mentioned.

For those who are aware that this reality exists, they understand that they must defend everyone’s home, the cosmos. Many times we lose this vision on the road.

If the novel will be published, I’d like to combine it with a show that mixes East and West – in Europe.

In addition to your artistic passions, you also host other artists in your home gallery, on the ground floor of your home next to the Gallerie dell’Accademia. How is it going in a place like Venice, a gigantic international showcase?

I select the artists I like for six months a year; for the other six there are many artists who ask me to rent the space to exhibit. It’s a non-profit gallery: now I’m thinking about turning it into a commercial gallery where visitors can buy the works. In Venice, as you know, during the Biennale, we have special laws allowing us to rent spaces for art exhibitions and for us Venetians this is a very important support.

Talking again about talents, and in relation to artistic creation: which do you feel you have not embraced or do not have enough ‘talent’ for?

I embraced photography and I liked it a lot, I have an interest in figurative art and I have already tried, I hope, to bring myself closer. I already have an idea to develop next but at the moment I’m not ready to tell what is about. It will be a job for the winter season when I have the gallery spaces all for me.

I think I have a clear vision, after almost sixty years in this life: our generation in Europe has had the enormous privilege of not living the war.

I’ve always been very sensitive to that fought by all means elsewhere – I remember as a child I often ran away barefoot at night, terrified by the Cold War.

Peace is an immeasurable value and we must fight for it.

Life gives us great gifts that just as suddenly are taken away from us: we need to learn to protect ourselves and to do it we need to create deep personal roots, to have identities, rights and a strong inner dimension in front of what life brings and takes away at the same time.


Browse Maria Novella’s poems and songs in our poetry section