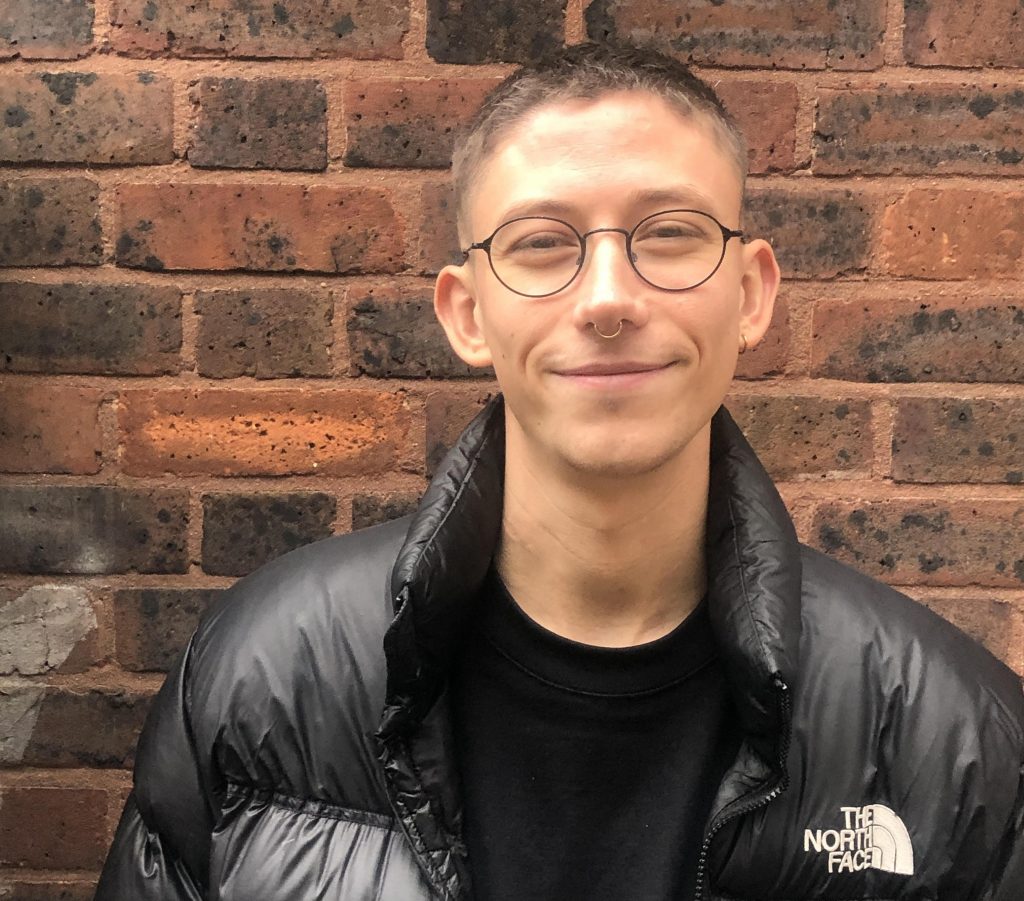 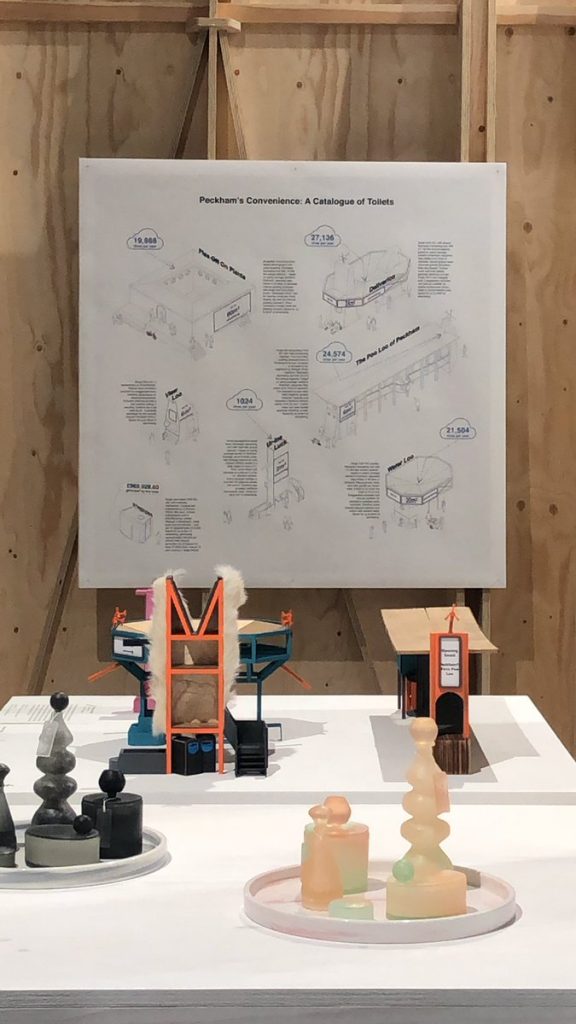 Despite my delusion in visiting the very needed new architectural development of one of the previously most degraded areas of London (the famous King’s Cross and its canal) I came recently across the new building of Central Saint Martins located exactly in the middle of this urban renewal, Granary Square.

Central Saint Martins is one of the best art schools in Europe and I entered not to visit the brand new headquarter but a seminal graduation show on sustainability which strikes me still today, days and days after the end of London Design Festival of which it was part of.

Among sustainable new fabrics, new working and empowerment methods to save poor or dysfunctional communities, revolutionary soap packagings made of… soap, papers and futuribile furniture minimizing or erasing impact on the planet in terms of waste and production cycle, I stumbled upon Peckham’s Convenience by Mark Freeman (a master’s student in architecture).

It is a new generation of public toilets where the use of water is minimized and where urine and poo are matters to produce fertilizers as well as not clog the already devastated English sewer system.

The toilet has also other interesting applications such as ventilation and vertical lighting to minimize electricity waste while in use (electricity, however, is produced by wind turbines and solar panels installed on the roof where the larger composting unit can also be found).

The toilet is obviously powered by rainwater and the student – now graduated – analyzed the average drop in the location area of his prototype to prepare the mixing ratio of urine obtained from users’ droppings in order to make the waste a fertilizer ready for use on spot.

Currently, public toilets are cleaned and administered by a well-known advertising agency that has excellent revenues (and for this it sponsors other similar services or bike sharing in the vast majority of cities in the world).

Freeman’s toilet provides advertising space in its reduced façade so as to make these margins directly available for sustainable builders who will have the courage to propose it in our cities. We don’t believe JCDecaux will be so smart to implant them …

Freeman’s Convenience reminded me of an English revolutionary project from the 70s recently recalled in a show at V&A: the Eco House of Graham Caine (a member of an ecological anarchist group called Street Farmer), really made ‘off-the grid’ in every sense (from electricity and sewers) and where the toilet was even designed by Caine to encourage anatomical postures such as to defecate completely (the faeces were ‘gold’ in his system of energy production, fertilizer and gas that kept the house active). The Eco House lasted three years in the south of London and then dismantled because the authorities denied it the habitability permits.

Mark’s convenience is a self-driven design, indeed born during a class observation in a public space where a small and unpractical urinal got his attention because still a very needed public furniture even if sexist (only for men), not positioned discretely and of course affecting other users of the public space while acted by someone. All in all – Mark told me in a Skype conversation –  it was a strange and interesting piece at the same time.

This spark worked in Mark’s mind until becoming a revolutionary project that could help any public realm, saving the planet and making revenues. He is still surfing on toilet design so if you’re interested, please do contact him!

Your life in a few lines exactly from where it starts

It starts from a small coastal town in the north east of the UK, near Newcastle.  I moved to Nottingham for my BA, after I worked for a practice of only three in Oxfordshire; most of my time there was spent designing and building a studio for the practice. I wanted to leave to study at an art school for my MA so I targeted London and have been here for a little over two years. I always wanted to leave the North East to have new experiences, but it is nice to come back and visit my places and the family.

How old are you Mark?

Choosing your course of studies, did you have any doubt about where to apply and in which city to attend your degree courses?

During my Nottingham BA I didn’t really have much of an idea of architecture – it was a well-rounded school. At that point I had no agendas so wasn’t particularly aiming for specifics. The city was good size to be a student and felt comfortable, that was the main factor of my decision.

Which leitmotif of your personal experience if there is one – rather than the study one – moved you to design Peckham’s Convenience?

Not sure there is one, the project came about quite organically and I just went with my intuition as things progressed. I find the often overlooked, but crucial, spaces in our cities interesting – which public toilets are just one of many.

Did you browse in your researches the work and life of a very incredible British thinker and ecologist, Graham Caine part of the anarchic group Street Farmers?

Which will be the next step for your outstanding project after the show in which I’ve learned from it?

I’m now back to working in practice (I work for What If Projects) after the degree, but I would like the opportunity to develop the project somehow. Being able to fund a prototype would be a good start but of course if the project comes to full reality I would need a proper team on it with me. After so many months working on the toilet, I should let it sit a little bit in order to start again fresher.

Yes, I quite like that there is lots of stuff going on here all the time, definitely.  I enjoy the intensity of the city.

Like most places around the world, it can seem fucked at the moment, I guess more than any other place – and talking from the perspective of the architectural market – it suffers from gentrification.

Major developments are happening and shaking a lot of things. I think the course I accomplished at Central Saint Martins and the work I’m interested in are two of the thousand of opportunities London had thrown to me!

It’s the right place to make changes in situations that are perhaps smaller and discrete.

Given my young age, I don’t feel to have so much to offer to the city.

I think you’re consecrating your youth to London which is a lot – the most valuable part of your life and your energy, therefore the city should give you back enough in change.

Yes, I guess. Returning to the history of this place, I love to add that London and the Victorians had a big history in toilets development, it’s a perfect place to start a new ‘way’ for toilets in London.

The book with you now (and where the book is laying on) and the music?

Italian food with a good wine is nice.

As a qualified architect, still in London  and maybe starting/started my own practice. Or …maybe a toilet developer?

What did you learn so far from life, doesn’t matter in which direction?

Don’t take yourself too seriously.