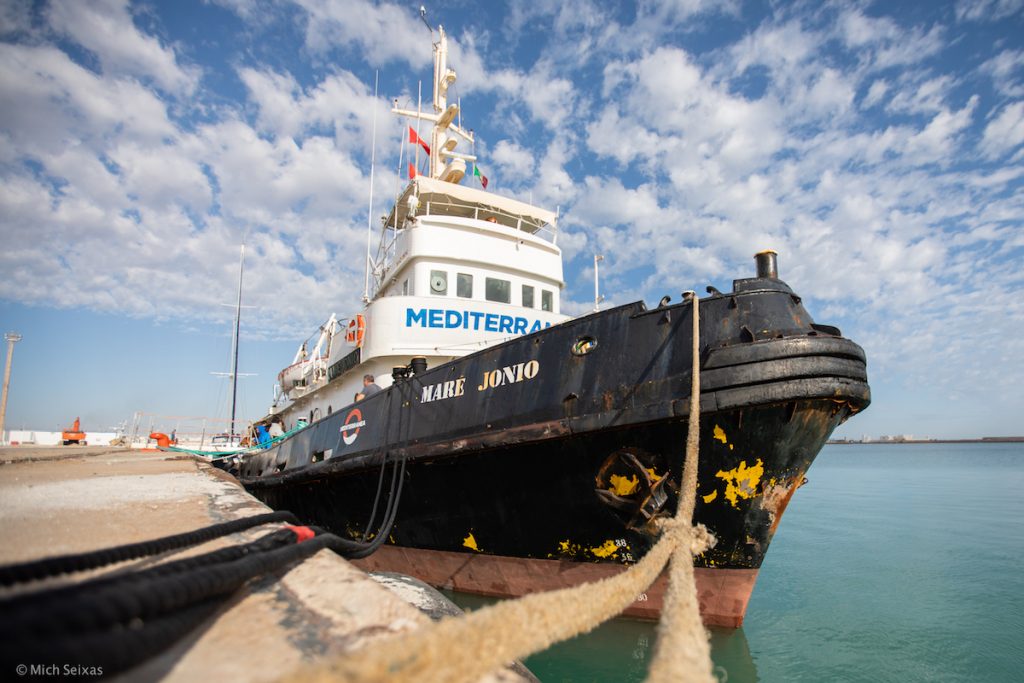 May the wind and the sea be kind with you,

I am an Italian boat, called Mediterranea. And I’ve been at sea for a few months. You can shop here to buy all the spare parts for the boat

I sail only in the Central Mediterranean Sea: I do not carry food or goods but I document and, if I can, save lives.

I obey and disobey at the same time.

I save first all the human beings who put me at sea with their saving and their wills: a compact nucleus of people – both individuals and non profit associations – who have decided to intervene to enforce the law of the sea and oppose their voice to that of racists and xenophobes. To save their humanity while saving other lives.

The Mediterranean is now a pure no man’s land.

On 21 December the Italian Ministry of the Interior (Immigration and Border Police Department) financed a further 20 vessels to the Libyan Coast Guard, in addition to those already delivered to them in August.

Libya – together with Turkey – is the place where a divided and inconclusive Europe has delivered the ‘solution to the problem’ that is the blocking of the arrivals of migrants in Europe. Costs what it costs and by any means. It does not matter how inhuman those means are.

Since the end of the Mare Nostrum military and humanitarian operation in the Sicily channel, only the NGOs have been left to preside over and save the survivors of all origins by a certain death.

Who are those shipwrecked?

People fleeing wars, famines, floods or droughts that often rage on alternate seasons on the same territory already battered by poverty and hunger or years of bad government. Men, women, children who do not hesitate to embark on journeys impossible to escape from certain, I repeat, death.

Once they arrive in Western countries, especially if they succeed without the testimony and control of NGOs, they become trapped by criminal trafficking and prostitution and enter another prison and another page of torture of their lives.

These impossible journeys often start from Libya, a country in which torture and violence on migrants crammed into concentration camps are immense and unfortunately documented without the theme of denial or downsizing it.

The migratory flow depends on the uneven development of the planet, therefore it has terribly profound reasons that can not be interrupted by patrol boats or by the so-called ‘closure’ of Italian ports.

‘Lies do not last forever’ said a shepherd of souls and Italian ports are actually open, having never intervened a regulatory event (the invocation of an article for clear, urgent and inescapable reasons provided for by the relevant laws: we are still a democracy and it has to be urgently reiterated) that must be issued to determine the closure (of all ports, to all ships).

Proof of the Italian ports that have always remained open is that they disembark all types of cargo, cruise and passenger ships (and, even, those of migrants arriving now with ever smaller means of luck).

There are about 50 landings per day in this season (ISPI source).

To prevent the landing with a will only political but not normative are a couple of ministers and this prohibition to reach the Italian ports is addressed in practice only to NGO boats, as we have often seen now.

The rest continues to reach every Italian coast, for the migrants in particular the landings reach all the Sicilian coast and also the Sardinian, Calabrian and Apulian ones and are carried out by small boats and sailboats, all of size not easy to be intercepted.

Many of these landings do not even come to the national news in the last seven months of the most xenophobic Italian government to date.

Another friend ship, Open Arms, has recently been blocked in Barcelona by Spanish ministerial authorities because it has been accused of ‘taking too long to rescue shipwrecks at sea: according to international conventions, they must be brought to the safe harbor as quickly as possible.’

How to accomplish it if the Italians say that the shipwrecked must be sent back to Libya (from where they escape, if they can do it alive, to torture and violence then the Libyan port is not absolutely safe) and if other countries deny the landing by forcing the ship to exhausting weeks of sailing at the mercy of the waves?

One thing is certain: before and after the rescue at sea we need to find solutions and not when we are at the time to find a care for shipwrecked people. Who knows how many died, and we do not know, in the last two years…

We were 9 ships acting as civilian eyes in the Mediterranean, now we are only 3.

In my opinion, governments are ‘outlaws’: I am part of ‘United for Med’ operation together with Sea Watch and other NGOs but I am not an NGO.

Who fills my tank, who populates my deck of a volunteer crew and the food and medicine galley is a heterogeneous group (Arci, Ya Basta and many associations and above all many single people).

Even though I was born and I have recently been in the sea, I know what has been going on for a long time.

In an informal and non-transparent manner, the governments of many European countries, especially Italy, question the legitimacy of European rules. Which is made of Treaties such as those signed in Dublin that regulates the redistribution of migrants.

However, the rules of rescue at sea and of fast disembarkation in safe harbors are universal rules of the droit de mer (which punishes the failure to rescue). They are worth far beyond the integrated European space, whose main treaty (to be sharp, the article 80) establishes the sharing of responsibilities regarding asylum and protection throughout Europe.

NGO ships in the Mediterranean are like ‘ambulances’ on the scene of an accident: they give relief and first stabilization. Most importantly, they monitor what happens. They fill a regulatory void, they call the authorities when there is a shipwreck, so that they take responsibility for the relief. These are not solutions to the problem of migration, which must be sought before and after these people take the open sea to save themselves from certain death.

Legal solutions necessarily switch from a viable redistribution approach. And the European Union did nothing when two years ago Mare Nostrum (an Italian initiative supported only by Slovenia) ended. There was therefore nothing more to put in operation a vaste Search and Rescue in international waters.

When the flows begin to be countless at the arrival of summer if there is not an operative thank of nations at sea the death toll will increase. And more importantly, the current strategy also aims to ensure that there is no witness to telling the Europeans and the world what happens.

If you want to meet those who believe in me, support me and tell me on my behalf (because I am a boat), there is not only the possibility of crossing my waters. You can go to many libraries and literary cafes around Italy that host human relays: readings made of more voices of writers and poets, singers and other artists to widespread what I can do.

Check out the next one – and find out how to support me – here .

2592 people, just like you, have today chosen to save themselves through and with me. Come and get to know me better on the ground. And let’s save ourselves together. On the ground as over the sea.


This fictional letter has been not written by a boat. We at #slowwords took the poetic liberty to write a true story on behalf of a boat and we’ll talk more about the humans making this possible in the next weeks with more contents and interviews