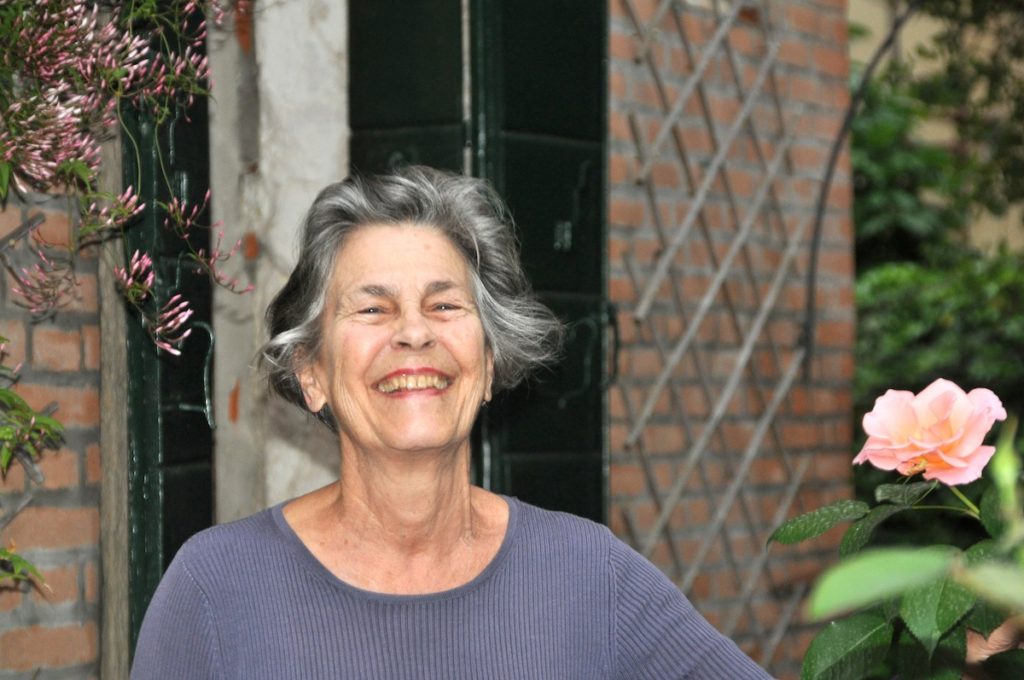 Those small pearls that Venice offers here and there – Venice, the unexpected city in its most recondite and authentic folds….

One of these pearls is Susan Wise with her powerful and minimal poetry, with her life as a keen and aware traveller. This interview – a crucible among French, English and Italian – is minimal as her writings. You will be very lucky to read one of them.

Anyway, there is much more than what we will tell you in a couple of seconds.

We omitted her first trip to Alicudi – when the small volcanic rocky island was still missing houses for tourists and tourism itself as we know it now. She reached it with the rollo (a small boat picking the passengers from a bigger one, unable to moor given the ridiculous size of the port). She was the sole woman on board, together with a father and his two teenage children (later he became the mayor of Trieste). And we omitted many other stories, as her first visit to Stromboli and Ginostra where, not yet 17 years old, she climbed the sides of Iddu (the Sicilian nickname of Stromboli volcano). She never returns in the places able to hurt her for how much they have been changed. Try to look for her in Venice to hear other very surprising stories…

It must be a few! As you can see, my life story can be quite long. As told once to my friend Anita Sieff, ‘My biography is a geography’: I was born in Los Angeles and lived in Paris, in Provence, in Bretagne, in Andalusia, in Gaeta (Italy, for two years) and then in Venice, where I have been for almost 20 years. So it is a real trial.

I started to love poetry as a child – I learned quite early to read thanks to my elder sister who taught me before school. I was used to copy poems out of books in a notebook (my mother took us to the public library and each week we took out two books each to read, very soon I had read all the children’s section!). I think it is important that in my family nobody read poetry or ever talked about it! Then when we moved to France I discovered French poetry at school, immediately I fell in love with authors like Ronsard, Alfred De Musset, Verlaine, Baudelaire, the great discovery of Apollinaire, and the Surrealists but also of Holderlin and Rilke, Ossip Mandelstam. I had very a normal classic schooling in France and graduated in French and English literature.

When I was in Paris with my family, we changed homes every year (right after the war there was a housing shortage and foreigners were not allowed to rent for longer than one year contracts). While my mother was tired of that, I was so happy to change often place and district (and the libraries of the different houses, that were offering a great selection of books).

When I was 18, I spent a year in Italy, alone, between Perugia, Rome and Florence. I wanted to learn Italian to read Dante.

After the degree, I married. I had three husbands and three children with different fathers. Also I did a doctorate. My favourite poet has been always René Char, I do not know if you read him (no). He is one of the greatest poets of 20th Century in France, also translated in Italian and in many other languages.

After the doctorate – my thesis on La Notion de Poésie chez André Breton et René Char at Aix-en-Provence (1968) – I went to teach at Berkeley, University of California, for one year. There, after a year, I decided I would not teach anymore because my profession had to be to write poetry. So I started as a freelance translator and continued writing my own texts.

When I came to Venice, I only had two suitcases. I no longer owned anything and I had to work all the time to make a living. I had met, before coming to Venice, Pietro Citati (Italian writer and literary editor), with whom I started a correspondence because he had written an article that I liked very much criticizing ‘the grand Louvre’. When the ‘grand’ Louvre was created, he claimed that modernity is not about making big things, but making many small ones. After a few letters we met in Rome, and when I ended up in Venice I asked him to help me to find some translation work and he recommended me to publishers of art books like Skira and Electa and so I obtained my first assignments. I’m immensely grateful to him.
My first house in Venice was on Giudecca, then on Rio Marin and then where we met few days ago, in Dorsoduro (all the places she was choosing are the most enchanting and off-the-beaten track of the entire city). In all these years I worked either for Italian and French publishers and English ones, above all I managed to be lucky to translate what I was interested in (the arts and architecture).

I adored the minimalism and the effectiveness of your poetry, especially the poems on your son and your daughter (the poems are contained in a superb total white self-published book she had printed in a small edition in Venice, entitled La Sirène Bicaudale).

Ah, do you like the poem dedicated to Pyra that is only consisting of two lines? Sometimes there is a great work behind to reach only two lines. The evidence is not given any day. It needs to be searched for. And you need lots of work to let something simple arise and then it is a mystery.

Do you write also narrative beside poetry? Did you start directly with poetry?

I mainly wrote poetry (the most important for me), but I also tried with narrative. I wrote a novel that was published (Un Conte Presque Bleu, éditions Séguier, Paris, 1993), but I decided that with poetry I would not try to find a publisher. I had poems published in some poetry magazines because I knew people there who loved my lines (since I do not live anymore in Paris, I do not have contacts there anymore). With the novel, I gave it to read to a very old man and to a little girl: both loved them, so I was encouraged to struggle to have it published. I sent it to many publishers, receiving around 20 refusal letters. Then I found a publisher who mostly published little-known works by famous but dead authors. Later I gave the novel to Giovanni Morelli (Fondazione Cini) to read and he wrote me a nice letter I still keep: he praised it, but according to him, it would never be a bestseller and would have been too expensive to be translated in Italian, although it’s inspired by Villa Ai Nani (Vicenza). I tried with some Italian publishers but I did not find anyone interested in translating it.

The title is borrowed from André Breton’s claim about what sort of novel to write: the conte bleu (conte de fée-fairy tale). I have also written short stories, one has been published in a poetry magazine. I’m not an author who is very engaged to publish…Maybe because I feel someone has to like my work without my looking for it, very unrealistic.

Which is the talent you have and the one you miss

Oh, this is a very complicated question and I do not think I ever thought about that before. I do not even know what talent I have…I have no idea!

I do not know what talent I would like to have either. I don’t really think in those terms, maybe I should start to.

A nice moment happened to you recently

Meeting on a vaporetto a curious and keen person who was really looking at Venice.

I like to drink wine but not anything else alcoholic, except maybe limoncello! I love coffee, of course. I love all the exotic foods – like Moroccan – then Italian and French.

A novel by John Cowper Powys entitled Porius, it speaks of only three days in the year 499 AD in Great Britain about the struggles between Celts, Romans and the early Christians. I’m in a great confusion with this book! Porius is the main character. It is said this is the most important book of the author who now is no longer so ‘popular’. Cowper was on the level – and was their contemporary – of D.H. Lawrence and of Herman Hesse for a literature concerned with issues such as sexuality and religion. For music Bach and Mozart mostly. Nietzsche wrote that listening to music means being in a state of abandonment, and I cannot always be in that state.

The day I received a letter from the great French poet René Char: it contained a printed page. When I read it I thought it was one of his poems but on the contrary it was one of mine. He had a book of my poems printed at his usual printer in Paris, where all his great poetry books illustrated by famous artists were done. To see the book Torches he took me there and gave me 50 copies of a few of my poems, among them the one dedicated to my daughter Pyra (Sous le dur tranchant) you like so much. On the poetical side, I think this has been one of the most marvellous moments of my life. Of course, I had other fantastic moments, as love stories, but they are too intimate and personal to tell.

Oh! (she smiles!) Maybe this question is more suitable for younger ‘people from this word’ you interview. I think I see myself dispersed. Under the waters of the sea. In form of ashes.

What (and where) did you learn more about your life?

From solitude, wherever and all along my life. But also from Nature, art and music. I love the Etruscans!

To read (and to buy) Susan’s books: