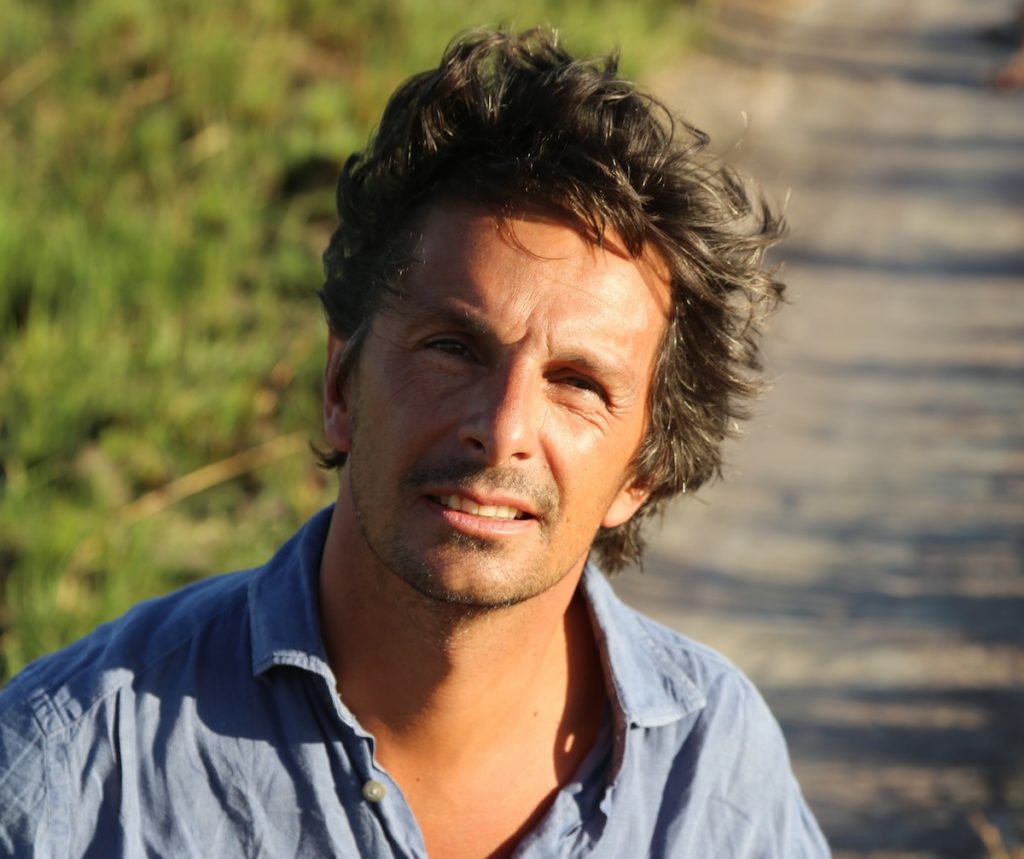 It will be a bit more than 10 lines, be prepared!

After earning a management degree at ESSEC Business School in 1992, I decided not to enter the workforce, and instead chose to travel around the world.

My first voyage was in South America, where I spent 7 months backpacking, improving Spanish, and, then, discovering the world: Argentina, Bolivia, Paraguay, Chile and Peru. I hitchhiked – and even “boat”-hiked – through these countries, covering more than 5,000 km (3100 miles). On my return to my native country, France, I completed my military service, preferring this option to the VSO. Thus I completed my infantry officer’s training at Montpellier before joining the 6th Marine Infantry Parachute Regiment (6thRPIMA, a regiment commanded by the famous General Bigeard) as a sub-lieutenant. When I finished the military service, I bought a one-way ticket to Beijing and decided to make my way back to Paris by land: it was the beginning of an exceptional 7-month voyage. First I entered Tibet clandestinely hidden beneath blankets. Then, while hitchhiking, I was picked up by Chinese soldiers, who invited me to sleep in their barracks, which dotted the entire length of Tibet’s border with India. Next, I reached Kashgar and Chinese Turkestan after following a reputedly impassable road through the forbidden region of Aksai Chin. From there, I travelled to Pakistan where I received an extraordinary warm welcome, especially in the tribal zones that became so infamous after the events of September 2001. Then I left for India, where he learned the art of meditation before returning to Pakistan. After crossing through Balochistan, I arrived in Iran, where I stayed for one month. I then passed through Kurdistan, Turkey, Greece, Macedonia (I was the first foreigner to cross this border, since Macedonia, which had recently won its independence, had just opened its border to Greece), Albania, Italy, and Switzerland, before finally arriving at the Gare de Lyon train station in Paris.

It was on my return that I wrote my first guidebook, Paris 300 lieux pour les curieux, with a friend before starting a job at Usinor as an export manager for South America. In 2000, in cooperation with Usinor, I founded an Internet-based steel company, working directly with Francis Mer (the former French Economy minister), to whom I provided a weekly report on the project’s progress. I then left for Brussels where I spent two years creating an Internet marketplace with Usinor’s competitors: Thyssen Krupp, Corus (formerly British Steel) and Arbed, which later merged with Usinor to become Arcelor.

At the end of his time in Brussels (2002), I set up my publishing company (Jonglez Publishing), specializing in travel guides featuring secret and unusual places. Preferring not to compete with existing guidebooks, I decided to adopt an original style, thus also creating a new type of guidebook: by definition, mine are written by local residents and only present places not found in other guidebooks. The target audience of these “secret guides” is thus the residents themselves, who can discover or rediscover their city, as well as curious travelers who may already know the city or region.

The first guidebook I published was Bruxelles insolite et secret (Secret Brussels) (2003), and its success (among the top 10 sales of all books in Belgium) proved that the model worked. I then released Marseille insolite et secret (which exceeded 9 times the sales objectives) and set up a partnership with Michelin who distributed it throughout most of Europe.

When I left Brussels at the age of 32, I also became Vice-President of strategy for Ugine & ALZ, the largest of Arcelor’s stainless steel companies; being also a member of the Board of Directors. In late 2004, I finally decided to leave Arcelor in order to devote all my time to the publishing company.

About a year later, I moved to Venice, Italy, where I continue to run Jonglez Publishing, which publishes guides and other books in seven languages (English, French, Spanish, Italian, Portuguese, German and Dutch) with over 100 titles in print. I recently published secret Venice, a guide that required 5 years of field research, which was awarded in 2011 the gold medal at the Independent Publishers’ Award, as the best travel guide of the year.

I do read a lot: for instance the general travel guides before travelling to a place I don’t know yet (although the best resources for hotels, bars and restaurants are often friends rather than websites and travel guides). On our side, our guides focus more on the secret cultural aspect of cities, which is different.

I read also “spiritual” literature. Which helps realigning myself / moving (back, sometimes) to higher vibrations. I love also classic literature and historical essays.

The world of publishers today is slow and furious at the same time – happening in a plurality of means (instant books, online pdf with multimedia teasers) and the way you developed your practice seemed to go well along all this. Practically speaking, having also a background as manager: why do you have chosen to widespread peculiar, self-invented and not mainstream products, as the ‘guide written from normal people to normal people’?

The market of the “normal” guides was already taken Lonely Planet, Michelin, Guide du Routard etc… Difficult to compete with them in the same line.

In addition, I hate travelling with lots of tourists around…

So it is both a personal taste and a business approach

Why such a great focus on travel industry? Is that because accommodation industry is the only one with great positive figures or because you’re an avid traveller?

I have travelled in more than 100 countries in about 30 years. I still LOVE travelling. Apart form the exotic and relaxing (sometimes) aspect of travelling the most interesting aspect in travelling is that, when you are travelling out of your traditional environment, you are naturally more conscious / attentive to what is around you.

Our secret guides focus on this, but in your own city: our guides, by helping you discover a place you did not know next to your home, entices you to become more conscious / attentive even when you are back home. In this regard, our guides help develop your attention / consciousness and curiosity. As such, they could even be considered as a mean to help spiritual development, which goes via this development of the consciousness.

Apart from designing and publishing books, what place self issued and creative writing has (or should have) in your domestic and private life?

Writing helps me clear my mind.

I also sometimes write in my personal diary, which also helps to clarify my mind.

Thomas as a traveller: still backpacking as the South America trip of few years ago? A mix of experiences? Do you love more to travel solo and/or with friends or family?

Family trips as well (last trip was in August in the Rio Tapajos, in the Amazon (fantastic!).

Trips with friends are important as well: my last friend trips were in Lviv (Ukraine) and Armenia, Azerbaijan, Georgia.

It is a mix of backpacking and sometimes more comfortable travel, when available.

Some “couple-romantic” trips as well.

How has been hard to start and how is hard to keep on such an intense activity as Jonglez Books in the market in which you act?

The start was pretty natural: although it took longer than expected, it comforted it in my decision: I believe that if you have to fight like hell to develop something, it may mean that you have chosen the wrong path.

You have to work hard, but it does not have to be a constant “fight”.

You have to feel in the “flow”.

This is what I felt when I started my publishing house: I had found my path, naturally.

Which is the most important achievement after so many years, as publisher? And which one as your intimate self?

That people seem to appreciate our contents. That the company develops regularly.

We have been able to reinvent ourselves recently (a whole new design of the secret guides has just been released).

Intimately: to have found my path in this publishing house, and keeping moving forward in my personal spiritual development.

And a fantastic happening you, as person, have had in the last days or months?

An amazing shamanic experience (from the Bwiti pygmeans tradition in Gabon), 3 months ago. It has been a life change and transformation. But it’s an hard work. You have to want to change. Seriously. The magic last just a few days. If you want it to last more, this is a very, very hard work!

Rio and Brazil are helping me in 2 things: Cariocas are very lively and happy; Brazilians are patient and this is an excellent double teaching. I think I am bringing them, with our secret Rio guide, just released, a way to consider and to appreciate a bit more their history and their heritage sites. Cariocas and brazilan are not always conscious of they what they have.

A good meat with French fries, a good fish with olive oil.

The book of the moment: “adventure of the consciousness” from Satprem. It has been in my bag for my 2 week trip just started. Otherwise, it is on my bed table.

One hour of beach walk every morning. The beach is right below my house in Rio.

Missing talent: empathy. Patience. But I am working on it!

“What you need is love.” More love.

Love is everything. It goes with consciousness, attention to the present moment, which also goes with slow life… Trying to slow my own life whenever possible, be more conscious, not only when meditating or praying, but on a constant basis: when you walk on the beach, eat, talk, make love… It is easy to understand but very difficult to practice. But it is the key. It’ll help increase your vibration.