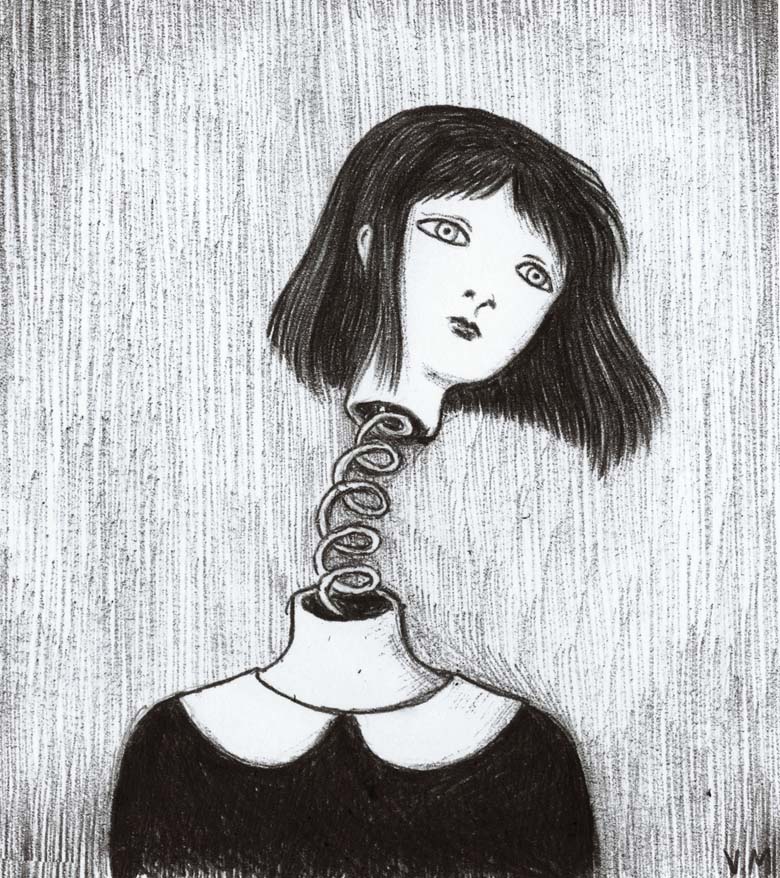 Born in 1981, I live in Pesaro, my native city, and in Milan, the city where almost everything happens in Italy.

I studied animation and design at the State Art Institute in Urbino. My favourite media are pencil, ink, and ballpoint pen on paper. In 2008 I won the “SRG idee suisse” prize at the “Annecy call for project” during the International Festival of Animation at Annecy, France. This enabled me to produce my first short film The Play of Silence which has been awarded with nominations and accolades at international events, de facto launching my career as an illustrator and director of animated shorts.

Since then, but also a bit before, I never stopped working as freelance illustrator for galleries and fashion brands.

Your line and your graphic patterns summarize either quality and other – as incredible as heterogeneous – gifts. For instance you have intelligence to explore bitter tales; you apply sweetness and sensuality together; you also show a certain clairvoyance.

What is your source of inspiration and where do you love to draw? Do you have masters driving your art and also culturally inspiring you? They could be other illustrators but maybe also poets, novelists and filmmakers…

Everything can inspire me, I would not be able to draft a border.

I love to draw in my studio that is located in the countryside between Pesaro and Urbino.

Yes, of course, I have my masters but they’re so many that at any time I have to pick up one because asked I really end in troubles….Today I choose Jan Svankmajer who describes in ten rules the art of filmmaking. He, together with Sergei Paradjanov, heavily influenced my language.

I have a true conflict with wording, so I keep myself very clear of it. But I’m fascinated by who is able to use words in a sincere and direct way. I rarely write also texts except the screenplays of my films that, by the way, I do not consider valuable because in that case I merely use descriptive words.

My sketches are sometimes accompanied by few lines or by single words as tips – they are indeed written in such a very fast way that makes the letters unreadable.

For the first time in these days I’m working with a writer – a poet – for an illustrated book and he is involving me very much. This occasion could stand as the kick-start I was waiting since ages to make up with words.

Which kind of encounters do you have during a typical work day and which is the origin of the story you told with Haircut, that has been also on the screens at the Venice Movie Festival?

I have very few occasions to meet others given that solitude is one of the key elements for my work.

The main concept for Haircut was arising by observing a lizard with the detached tail, this latter was shaking independently from its body: I wished to reproduce that strange sensation in a movie.

Which is a wonderful happening you had in these days, apart the past ones as having won residencies and awards, as the one at the very important Annecy Festival…

They asked me to exhibit the original drawings of my book Vento at Salon du Livre et de la Presse Jeunesse a Montreuil (Paris).

Which wine or drink do you love?

It is depending from the moments, I actually prefer a very good red wine.

A book with you now? And where the book lies on?

At the moment, on the table lies a copy of Karl Kraus’ Aphorismen in an Italian miscellaneous edition published by Einaudi.

Patience/ being able to play a musical instrument

Which are your methods to live slow, if you succeed to do so in this moment of your life?

I am super slow: I do not have a method, it is a natural gift – I do not know if luckily or not.

What did you learn since now from life?

That you never stop learning.

To see, or to buy, Virginia’s artworks: http://virginiamori.com/