Proportio a view of the show 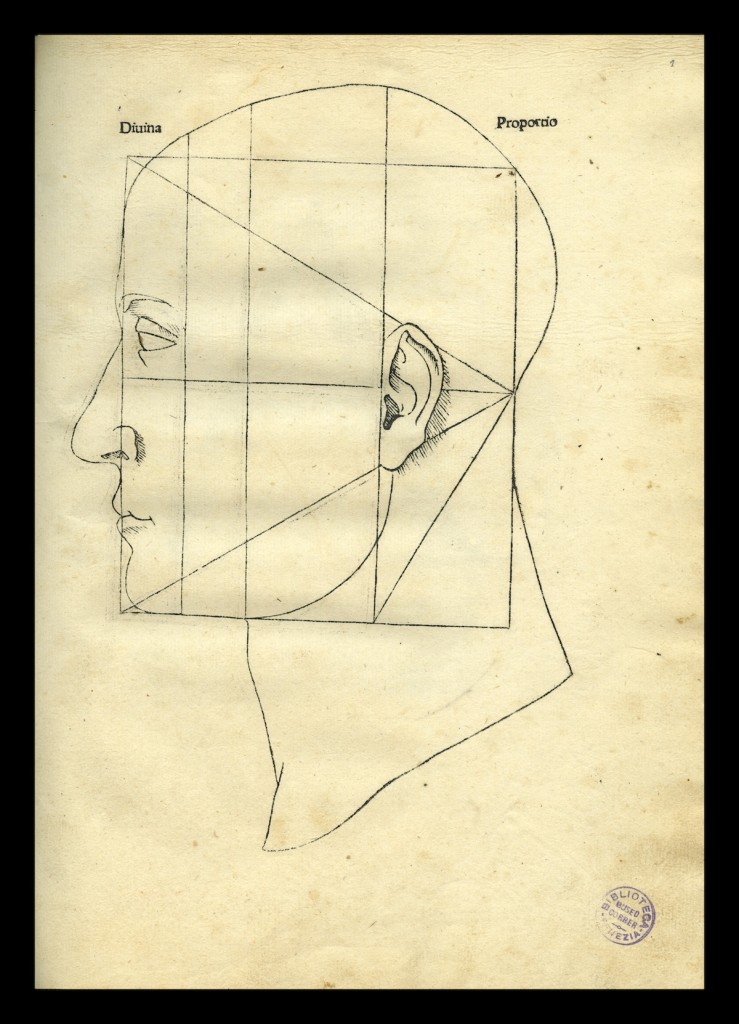 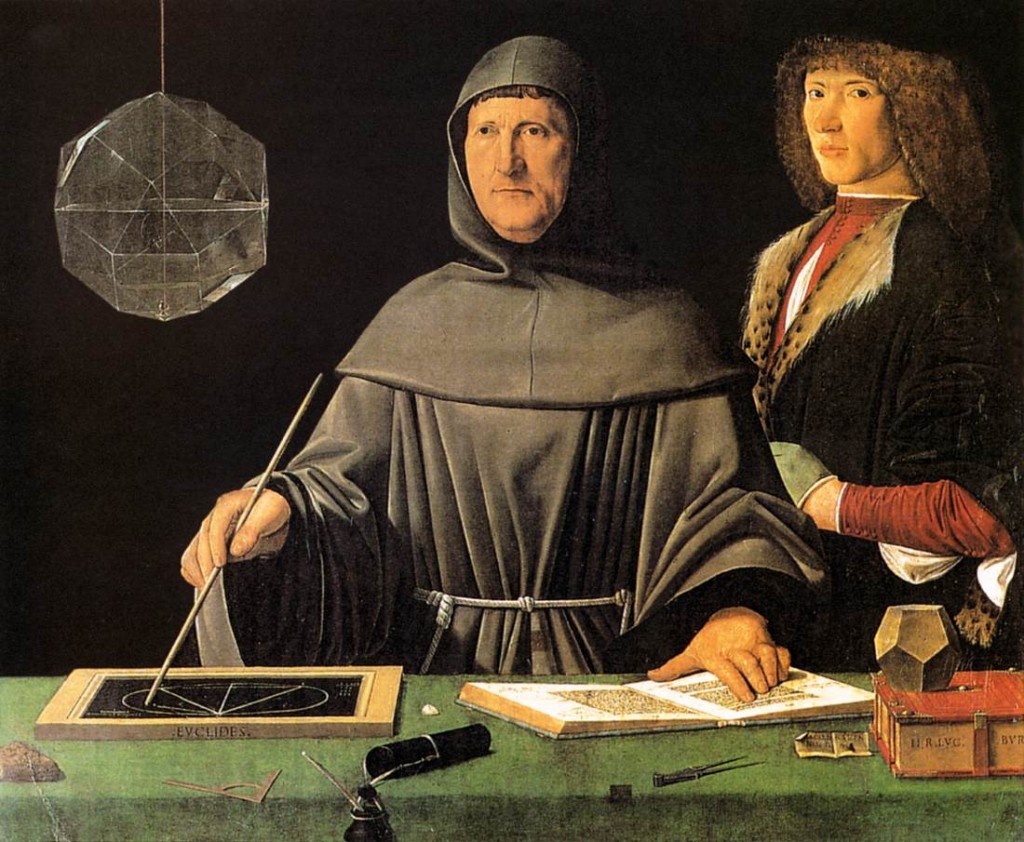 “To see a world in a grain of sand and a heaven in a wild flower, hold infinity in the palm of your hand and eternity in an hour.”

A tribute to Luca Pacioli

A special number, the expression of an unusual ratio in which the “the whole line is to the greater segment, so is the greater to the lesser” (Euclid), represents the symbol of the harmony governing the universe. This number, represented by the Greek letter phi (φ), is the so-called irrational 1.618033… The story of the “golden ratio” or “golden section” (but also known as “divine proportion”, “golden mean” and with other names) has evolved over three millennia: the esoteric conquest of the school of Pythagoras (according to Iamblichus the discoverer was Hippasus of Metapontum), and investigated with regard to the laws of musical harmony, it was defined in writing for the first time in the thirteenth book of Euclidis Elements. Forgotten for nearly a millennium, it was later rediscovered and dubbed Divina Proportione by the Renaissance mathematician Luca Pacioli.

A member of the Franciscan order, Luca Pacioli was born in Borgo Sansepolcro in 1445 and began his apprenticeship in the workshop of Piero della Francesca, whose mathematical skills were as much appreciated as his painting. His predisposition to the study of mathematics, however, led the young student to continue his education in an abacus school (a sort of technical college). He completed his academic education in Venice at the Scuola di Rialto which based its teaching on Aristotelian, naturalistic and scientific philosophy; influenced by the work of Fibonacci and other, antique and medieval treatises, Pacioli was the bearer of a school of thought in which one can sense the continuity between Euclid’s Elements and Plato’s Timaeus, as he sought a universal principle underlying everything. His vast and wide-ranging culture and deep belief in the applicability of the mathematical sciences to all fields of human knowledge soon admitted him to the small circle of learned Renaissance intellectuals, as evidenced by the acclaim he received for his Summa de arithmetica, geometria. Proportioni et proportionalita, published in Venice in 1494.

Invited to Milan by Ludovico il Moro to teach geometry and mathematics, in 1496 he began writing the manuscript of Diuina proportione opera a tutti glingegni perspicaci e curiosi necessaria. Two years later, it was finished and published by Paganino Paganini in Venice in 1509. This work, which offered a compendium of the mathematical knowledge of humanism for the first time in the vernacular, was accompanied by sixty plates drawn by Leonardo depicting the Platonic solids, together with upper-case letters drawn with a ruler and compass by the author himself. The book contributed significantly to the creation of a new, widespread interest in φ in the arts.

The many forms in which φ manifests itself reveal a profound, underlying relationship between the physical world, artistic and cultural creations and the beauty of numbers. Nature, art and science are closely linked in the light of the golden section.

Often debated and still unresolved is the question of a conscious use of the golden section by the Babylonians and Egyptians, especially in the pyramid of Cheops or in the stele of King Djet conserved in the Louvre. Its presence in classical Greek buildings too, such as the Parthenon or the Temple of Concordia in Agrigento, and in Roman architecture, such as in the Pantheon, is controversial; on the other hand, it would appear to be clearly established at least in the case of the 9th-century Great Mosque of Kairouan. In the Middle Ages, imposing Gothic cathedrals such as the Duomo in Milan and the gateway of Castel del Monte in Andria amply testify to the complexity of the building principles constituting the body of knowledge held in exclusive manner by the corporations responsible for the realisation of such works.

In the Renaissance, with the revival of Vitruvius’s legacy and the studies of Leon Battista Alberti, it was Leonardo da Vinci who was the first to adopt the Divine Proportion systematically, while Albrecht Dürer completed his artistic training by studying theories of perspective in mathematical treatises and the writings of Italian scholars. This consolidated an artistic tradition that stretches down to the present day. In the late 19th century, psychologist Gustav Thedore Fechner undertook some studies on the “agreeableness” of the golden section, and these are to a large extent responsible for the fame it still enjoys today.

The transition from an appreciation of proportional ratios with particular aesthetic quotients to a modern series of formulaic instructions has represented an extreme reduction in the significance of the use of φ, rendered far less effective than in the past because of its belittlement by the mechanical application of formulae that are, alone, inert and unproductive. By themselves, they guarantee nothing as to a harmonious, golden proportion of the parts, which instead lies in mutual relations; and these are not measurable in feet and inches but with perceptive intelligence, stimulated probably more by intuition than by reason. Not surprisingly, recent studies in neuroscience have found that in the presence of golden sections, brain activity in the area governing emotions imparts a state of well-being.

More than sixty years after the conference sponsored by the Milan Triennale in 1951, re-proposing the concept of proportion in the field of artistic disciplines and further afield constitutes a stimulating topic for discussion and an opportunity to reflect on its topical relevance. When all is said and done, the golden section says something about us, about our need to unravel the mystery of existence and our relentless pursuit of a universal principle underlying all of creation.

Portrait of Luca Pacioli with pupil*

The enigmatic painting in the Museo di Capodimonte in Naples and until now attributed to Jacopo de Barbari is perhaps the finest portrait of a mathematician there is. Fra’ Luca Pacioli stands at the centre behind a table, on which number of drawing instruments are scattered. A closed volume bound in red on the right side of the picture is Pacioli’s Summa Matematica; a Platonic dodecahedron has been placed on top of it, while a copy of Euclid’s Elements lies open under the mathematician’s left hand, in which he points to the concept he is drawing on the slate with his right hand. The word EUCLIDES is clearly visible on the frame.

The empty space at upper left is filled with a three-dimensional model of the rhombicuboctahedron, an Archimedean solid with eight triangular and eighteen square faces. Hanging from a thread and half-filled with water, it refers symbolically to Pacioli’s studies that would soon be published in his De Divina Proportione. The identity of the student standing on the right behind the friar and looking out of the picture towards the observer, has been the object of much speculation. Recent studies backed by historical investigation have shown that he young man portrayed is Galeazzo Sanseverino.

The scroll bearing the inscription IACO.BAR.VIGEN/NIS P.1495 on which a fly has landed, long considered the signature of Jacopo de Barbari, is supposedly actually a cryptogram. The philologist and art critic Carla Glori, who has dedicated a great deal of keen study to the painting, has recently provided some spellbinding keys to its interpretation: the sixteen letters, three points, four numbers and a fly allegedly conceal not only the secret of the death of Gian Galeazzo Sforza, but also the name of the true author of the painting: Leonardo da Vinci.

But leaving aside scholarly interpretations and speculations as to attribution, the portrait of Luca Pacioli retains the aura of mystery transpiring from the immutable balance of all the elements making up the harmonious whole.

To buy the book in English: http://www.axel-vervoordt.com/en/books