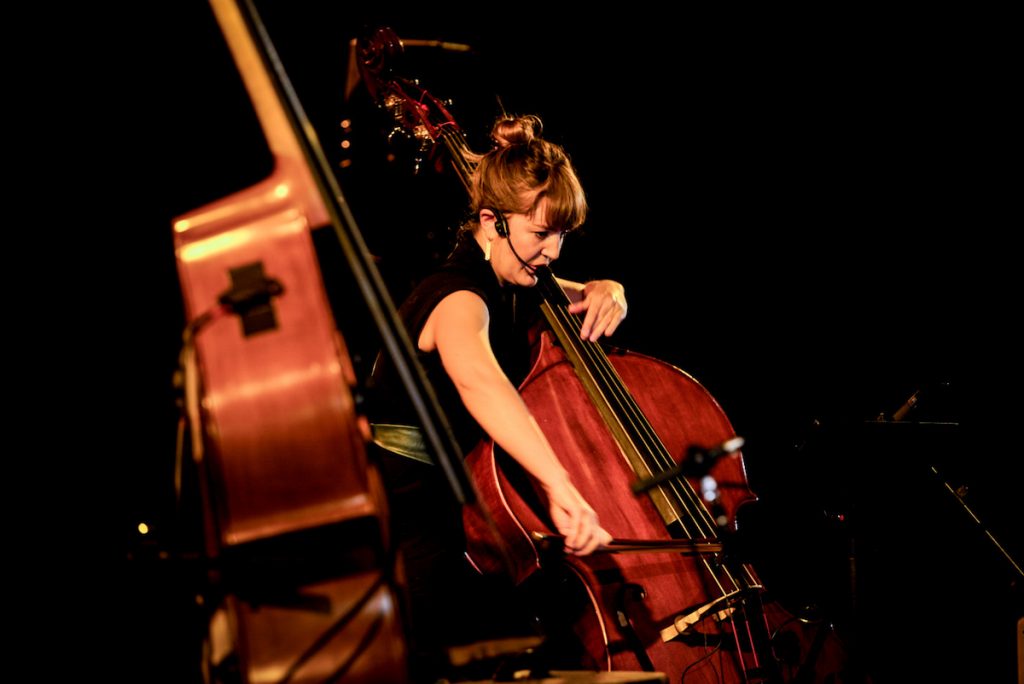 I have a father clarinetist and, when I was little, I started to study piano and cello at 5.

My father was a lot in baroque and ancient music: he later became director of a conservatory.

My mum was not into music, but I was really drenched into it in any form and since I was very young I listened to many concerts and attended many contemporary dance performances. I still love very much contemporary dance, I practiced it for four years and I attend many performances still nowadays. Even when I played piano, I was always telling around I would never become a musician, I was rather thinking to study medicine when it would be the moment to choose my university studies. During my early studies at the Music Conservatory in Nieul there was a double bass player, Claude Tchamitchian, coming for a masterclass on improvisation. That is the little city where I was born, it is located in Provence, beside La Rochelle: I dwelled there until the age of 15 then I moved to Paris.

I love a lot Marguerite Duras, I did not know that!

When Tchamitchian came for that improvisation class, I was totally taken by this instrument, its sound and of course also fascinated by the musician. It was not convenient to study double bass in Nieul so I continued with piano and cello. Another seminal meeting happened later with double bass: with Joelle Leon, who is actually around 70. Joëlle Leandre developed an incredible repertoire and is a grand militant of improvisation (and of feminism also!): that was enough for me to move in Paris and immerse myself in this so loved instrument, even if I did not quit piano.

As an amateur very far from being a professional ‘listener’, I think that double bass is like an oxymoron in classic and contemporary music, the biggest in an orchestra and the most difficult to physically be played ‘solo’ but also the most versatile. Not only for improvisation…

You’d recently chosen electronics and double bass with an interesting program putting together world and Italian previews (at #BiennaleMusica2018, #CrossingTheAtlantic) written by a fantastic range of young composers: we’d already interviewed one of them: Aurélio Edler-Copes. Is your main direction only toward electronics?

I use the double bass in any direction: I’m curious to live more and diverse experiences. When on the electronic dimension, of course very different from the acoustic one, I’m interested in exploring the ‘extension’ of this instrument. It’s also part of a generational path, is something we can do with the actual research and also already part of a very solidified repertoire in the history of the contemporary music. What has to be said is that the use of electronics requires lots of tools and extremely competent technicians to be performed for pieces which do not live longly enough. We are lucky that in France we have institutions for this kind of music.

And what about a circulation of this ‘augmented’ music in not traditional ‘concert halls’ for instance in clubs?

Very often the technical complexity made this impossible, but for instance the composition signed by Aurelio contains this kind of reflection because the first part – acted just by the two amplified and electrified double basses one in front of the other – can be made elsewhere, quite everywhere. With my system of pedals this is easy to command. This piece, yes, is made to be performed in situ in places not mandatory made for classical music.

Aurelio, and also Francesca (Verunelli, 1979, red.) the author of another of the pieces you’ve executed in premiere, are really ‘readable’ as students of the same institution which is seminal in this kind of music (IRCAM). Francesca’s piece is different from the Aurelio’s one for her specific kind of versatility, and the finale of her piece is very interesting. It’s hard to imagine how they wrote the pieces with the aim to be played in such a precise way from you…

I agree with you, the approaches are different especially in the way the double bass becomes electronic or viceversa when the processes are more mechanic or automatic. That’s why I worked a lot with each composer to look for the right sound able to approach the same sinusoidal level. There are parts in which the sounds I have to play are very precise in the partition, while there are others in which I have more ‘measures’ to build the sound.

I am delighted to be generous with my city and at the moment the situation with migrants is very sensitive. It is something touching me very much, I need to contribute a little bit. What is terrible in Paris is the ignorance of the people and I try to let them take a difference conscience about the topic by talking, respecting, to change the course of the interaction and similar – not only by giving away food or other kind of helps.

Ohh! In a place of happiness! I hope a lot and I especially hope to live new musical adventures but regarding the place I wish to stay where I am. And to discover more. I wish to continue to be curious.

You seem in a good relation with poetry….

I had a few projects with comedians and poets, especially one with female poets and strings at Maison de la Poesie in Paris (with double bass and violin). I loved also a project with another poet, this time a German and Jewish who escaped to Holocaust, Nelly Sachs (The Enigma of the Fire).

I also worked with a composer called Jacques Rebotier who works on language and how it can become itself ‘music’.

Are you also a reader of poetry?

Yes, I had been very touched by Nelly Sachs lately.

To know more of Charlotte and her performances calendar: https://www.charlottetestu.net/

(the cover picture is by A. Avezzù – courtesy La Biennale)