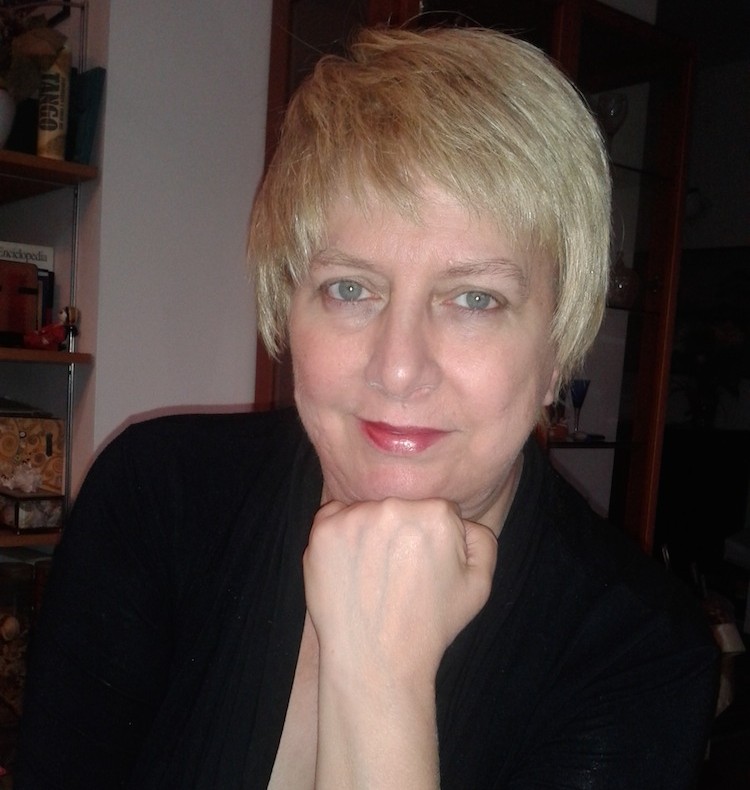 Lucia Tosi, portray by A. Giurola

I was born in Venice, the last of nine brothers born over the course of twenty-six years and very different one from the other. I did my studies mainly in religious private schools around various Italian cities. I graduated with a degree in modern literature at Ca’ Foscari. I didn’t want to become a teacher or even to graduate in literature because I had a huge passion for architecture and design: but also an incoercible loathing towards mathematics, so I fell back onto literature, having attended secondary school focusing on humanities. In truth, a passion for Italian language grew out of it, its history, its dialects, which has lasted unchallenged up until now. I’m not one of those people who say they’ve always been writing. I wrote a few pages of a diary, some teenage short stories: then that was it. I devoted myself body and soul to the teaching profession and to my family, to some sports, to Argentinian tango, which I continue to practice. Poetry and writing actually came very late, more or less in 2006, thanks also to the incentive represented by my association with blogs dealing with literature, which encouraged me to write.

In your view, poetry is rather something that is read or recited? In other words how do you like it best?

Poetry needs to be read aloud, either alone as well as in public. In the first instance it fulfills the purpose of getting itself known, coming into contact with the most intimate part of ourselves; in the second instance it is to be recognized and thanks to the performed reading, to make the onlookers participant of the discoveries we have made personally: poetry is therefore virtually always new in regards to the solicitations it brings about through the various voices of whomever is reciting, which is the outcome of every single personal poetry reading.

What urges you to write poetry?

If I were to say I write poetry thanks to the push of some sort of inspirational “genius” I would be telling a lie. Just as I started to write verses without any particular mayhem (the idea that we must be in some way distressed descends from the Romantics), actually, maybe during a moment of happiness in the middle of a generally hard life, so each time I write a poem I do it because I feel like playing with words, or with a point of view on my life, which is never really just my life. Sometimes I wake up with words in my head, with some images: I stretch out, organize slightly, then I realize that they are hendecasyllables, of heptasyllables, verses belonging to our tradition.

Have you written some novels? If yes/no, then why?

I have written some short stories, which are not that bad. I’m inclined towards the short, brief, fantastic, symbolic event, having a surprising ending. I think, looking at the way I feel while I write, that I should make a further effort along these lines, because when I write prose I’m very serious, when I write verse I smile, disregarding the fact the novel might end up being funny and the verse, on the contrary, dramatic. And seriousness, the pensive attitude, are maybe more suited to the real writer instead of the smile, the feeling of being at ease. Sometimes I say to myself that to be able to write well we might have to suffer while writing, but I’m unable to give myself yet an answer.

What do you seek for in poetry written by others?

In the poems written by others I seek for a rhythm dictating meaning to the words. I don’t have much patience for “poetry speak” and obscure verses: I shy away from everything that is uselessly complicated from the Greats of the nineteen hundreds: for example the Hermeticism and therefore all the exaggeratingly complicated poetry which comes out of it. I like the singing quality, the apparent simplicity, which, as mentioned by Saba, remains on the contrary the steepest cliff for a poet. Then again simple and singing are in my opinion foreign concepts to all that poetry depicting sun sets, seagulls, goodbyes: there is a lot on the web and in the press of that sort.

As a teacher, what sort of reaction do your students have nowadays towards poetry?

Poetry is a niche product. We don’t read much in general, but poetry is very much a fourth degree cousin and in addition a very poor one. It arouses feelings if those who’ve charged themselves of making it known are able to read (interpret) it, can read it again (unearthing and helping unearth the formal links and the truly poetic word, meaning creative), is able to inspire new thoughts, knows how to greet contrasting reflections. From this point of view poetry has a communicative potential and consumption superior to narrative. The more distracted student can surprisingly enjoy Virgil, in the original, with the appropriate techniques: rhythm, phonetic symbolism, vocabulary, sense.

What sort of encounters do you make when you work?

The encounters one has in the teaching world is for ninety nine percent tied to the school environment: a world quite closed in itself. But this makes up for an interesting observatory for those nurturing a curiosity towards the human spirit: I unfortunately see therein many more weaknesses than virtues and I have all the time to watch its evolution and make a pessimistic treasure of it. This happens above all amongst adults and less so with young people, who continue to be the only true beautiful thing about teaching. Some academic and novelist we manage to invite, although less the case now, to the school, make up the remaining one percent.

I’d be tempted to say that society doesn’t do much for me: but maybe above all because the idea of “society” is a concept ever so vanishing, increasingly less provided with a recognizable physiognomy. If we all agree that what we intend by society is the “others”, then I must say that, under the aspect of small groups or single individuals, society, for instance at this particular moment which I’m living, does a huge amount for me.

I believe that for society I do quite well my job first of all; then I make myself useful to someone because I listen (and describe in turn my daily life), for instance with the elderly. To do well my job means making use of literature, writing, critical inquiry to open passages on the life, on the fixtures and variables ever so unbearable of today, trying to make myself spokesperson of legality, honesty, defeating however much I can the sadness for the lack of passion which is so typical of young people of our era.

Something remarkable, which has happened to you recently?

Recently I received a beautiful letter from one of my classes accompanied by a magnificent flower composition. I read the letter aloud but had to stop more than once: it made me laugh a lot and was very touching. To be missed so much by the students is not a feat for everyone!

I really love to cook and they say I’m good at it. I love pasta, meat not so much, fish a lot, vegetables, and fruit. Over the past two years I have developed a passion for cakes, sign of aging. That’s it: a simple home made puff pastry with marmalade could constitute a culinary passion.

I love all wines, the reds for instance and I enjoy spritz: with Aperol a slice of lemon and a big olive.

The music or a book that accompanies you.

I like Monteverdi and Mozart very much, 60’s and 70’s pop, not Italian, opera and obviously tango music. A book (in truth there is more than one) which I never stop reading is the Divine Comedy.

A talent you have, one you’re lacking

I think I have a sense of rhythm, which I carry out by writing and dancing. Something that I lack since always is constancy: in truth I lack an infinite amount of “talents’, but to have had the virtue of perseverance would have allowed me to better take advantage of my talents. I add one talent: the inclination towards irony, with which I’ve saved myself and constantly save lives with.

What are your ways for leading a “slow” life?

I live slowly even when I can’t afford to do so: I’m one of those people who ruminating on hundreds of things doesn’t do them or becomes anguished. Then, magically, these things get carried out. Not always in the best of ways, but in this manner I survive work rhythms and loads, which at times can be brutal. Lately I’m a bit out of the frantic pace of the working world because I’m unwell and I’m fascinated by the very slow and repetitive sphere of time, I like it incredibly. I think it has something to do with ordinary laziness, but given I’ve never been lazy, due to force majeure I think I could call it “ spirit of preservation”.

I’ve learnt you can never be relaxed: troubles come looking for you even if you’re still and you don’t do anything wrong. Manzonian moral? But this is how it really is. Keeping a peace of mind needs to be exercised in the midst of storms: I hope to reach, sooner or later, a sufficient ataraxy.