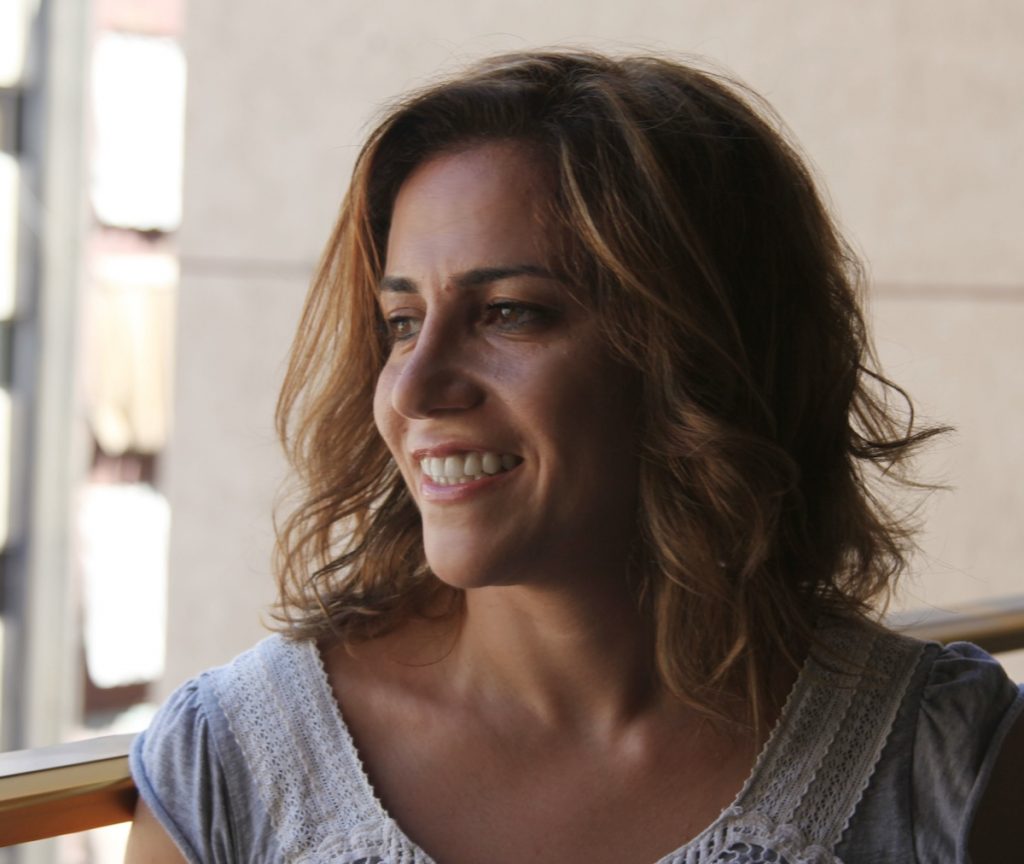 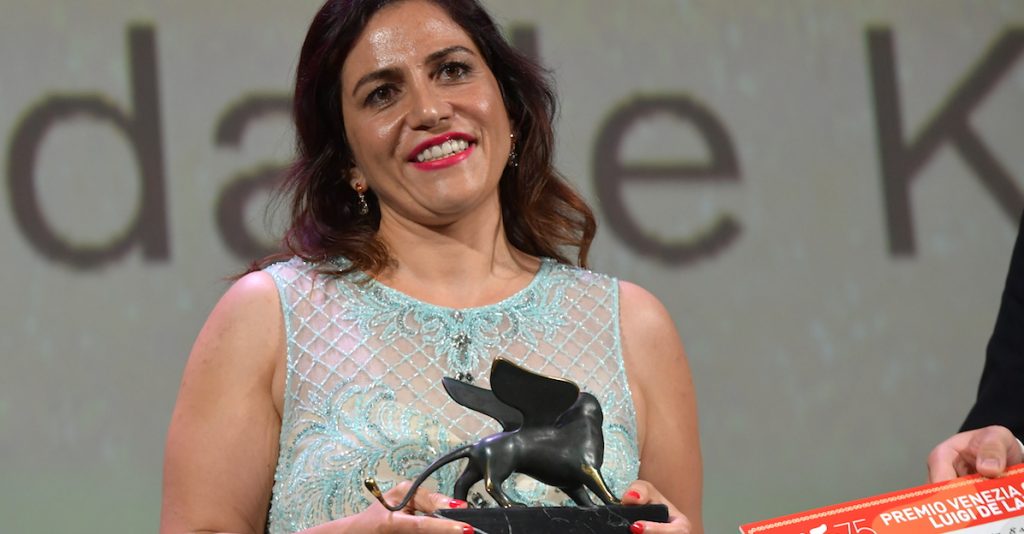 Soudade Kadaan is the brave Syrian director who made a movie which is in many senses art-house but deals on the psychology of the armless involved in conflicts, especially her conflict happening in Syria. Very actual – either politically given the war is not going to end and speaking in term of film industry – her Yom Adaatou Zouli (The Day I Lost My Shadow) is a movie with a whole female-crew able to drive the audience where the news have no reach: how people in war live – especially women, elder ones, kids and those renegades resisting and fighting with no worry for their lives.

We have been lucky to watch the movie, to know her in depth because she is so sincere and strong to open up to audience and to press equally. No doubt she gained the most ambitious prize at the Venice Movie Festival 2018, which helps especially these kinds of powerful authors: 50.000 $ to the director and 50.000 $ to the producer of the movie.

Look for this movie, wherever you live: it will change your perspective on war zones and on what means to be humans every single day of your lives.

Your life until now

I’m Syrian born in France, lived all my life in Syria. I moved to Lebanon after one year of the war at the end of 2012 and stayed there to finish my film. I decided not to leave Damascus before finishing the script, writing it during the beginning of the war, and decided not to leave Lebanon before finishing the film, even with the difficult conditions of residency for Syrians in Lebanon. Now I’m on the flight heading to Toronto after Venice to present my film. I’m hoping my next film, the next step of my life would be in a different country, where I can have some basic rights as a resident.

Your movie is beyond necessity and is meant also to deliver the truth to the history. From the very human side one. From people to people, politics is cut off from your story. What means for you a “necessary “movie? Can you give me an example of other movies you’ve watched as audience of this kind?

The necessity of this movie is to show the human side of Syrians living under the war. Since people feel when they watch the news about Syria, that we are different, that this will never happen to them, and this war is only because somehow remotely in another country some people are different. We are not. We never thought it would happen to us. That’s why I don’t try to analyze the political situation in Syria in the film, this idea of “Syria is too complicated now” is dismissed to show the human suffering under the war. Since for us the story is simple: There are normal civilians suffering under war trying to search for basic life necessities and survive the day with dignity.

I watched a lot of movies about war, because I had the question ‘how cinema can talk about war?’ Is it really capable of reflecting the cruel face of war? Not surprisingly a lot of films gave me an answer with simple stories like The Bicycle Thief and Can You See Now, or Hiroshima Mon Amour.

Which is the state of art of the movie industry in Middle East and Arab world ? You’ve been backed mainly by Qatar and European funds, included the Rotterdam Hubert Bals…

It’s very difficult now to make art house films in the Middle East. A lot of funds are suffering and major festivals in the region closed down. We could make it with the generous support in the Arab region like DFI, AFAC, Arab Human Rights Fund AHRF, Sanad, or targeting Syrian filmmakers like Prince Claus fund, Shubbak Festival and Cinereach. We are also grateful for the support of Hubert Bals fund Rotterdam, and Aide Aux Cinemas du Monde CNC. At the end we could only finalize the film with the support of Metafora company.

Can you tell me more about your role as director and of your sister as producer? Did you study together, did you work already together in other roles?

I started working on this film with my sister producer Amira Kaadan in Damascus, where we got the first financing. Then we moved to Lebanon at the end of 2012. My sister never wanted to be a producer before, all what she wanted is to help make this film. I was lucky to have here beside me in everyday during this entire struggle to make the film. It was a long journey of 7 years. Whatever were the obstacles, the challenges and difficulties she always answered: We will make this film. Every shooting day, she would take the decoupage/ shots list of the day and assure that it will made exactly how I imagine and envision the film; without asking anything for exchange, putting all her life saving to make it, never questioning if she will have it back one day. And this is rare. Only a sister can do it.

The movie has been shot in Lebanon and many people of the crew had to commute from other countries and being having the state of refugees for some of them has been uneasy. This story can be a movie itself, can you tell us the hurdles and the joys during the making of?

The production of the film is the reflection of Syrians situation now. It was extremely difficult for an independent film in Lebanon to make a film with an entire Syrian cast. Syrians in exile and refugee state around the world, I had to make the casting in different countries. The main four actors: Sawsan Ercheid asked asylum in France, Reham is based in Berlin, Samer in Syria and Oweiss in Lebanon. To reunite the four actors, with the difficulties of visa permissions for Syrians in Lebanon wasn’t easy. Beside the main actors all the cast is first time actors coming from refugee camps in Lebanon or suffering from their residency status in Lebanon. I wanted in the film to include my community. My background as documentarist made me believe that there is nothing like the real face of someone who suffered from the war. Also my background on working with interactive theater made me believe in the importance of art to express the trauma and living experience. The moments we shared during the making of the film, since the war is just here and just near, made everything we did intense, the cry in the funerals in the film, is the cry for their kids, friends or brother they lost during the war. Once the shot finished, the emotions were still there, because some how this wasn’t only fiction. That’s why the experience was intense for everyone.

The movie despite the terrific war story-has a very art-house touch and the idea of the shadow, also the way you manage to subtract it in the shooting is very well done. Is there any artist inspiring or a master?

Thank you for telling this about the movie. I don’t believe in masters, I believe in films that inspire. I was inspired by a lot of directors which films I carry with me and touched me. Usually I look and search for films directed by woman, because women directors have mostly a female center character, with non-stereotype approach of woman. I watch almost a film per day, unless when I’m shooting or editing, so the list is long, to name few of them: Andrea Arnold, Claire Denis and Jane Campion. From the Arab world Hala Lotfy, Kaother Ben Hania and Daniel Arbid. Each one of them has a different unique approach and cinematic language.

Will you return soon in Syria?

I can’t come back to Syria now, my name is still on the black lists.

A book my sister wrote about a kid in Syria who doesn’t understand what’s happening around him, Tomorrow, about music I have to admit that I rarely listen to recorded music. I just feel I need silence after working on a film and I only enjoy music when it is live in a concert.

Shakrieh. It’s a Syrian dish, very delicious, cooked yogurt with meat, and aside dish of rice. My mum prepare the best Shakrieh dishes.

I don’t know if my talent is filmmaking, but for me it’s the only thing I do and enjoy making. It’s so passionate for me that it makes me forget the doubts to be talented or not, it’s just the way I want to tell the story and how envision the film. Talents I miss? There is few of them, but aren’t we a little bit geeks while we make movies?

I don’t know. I can’t see myself in few months. The state of exile make you only hope next year you would have more documents that allow you to travel freely while holding a Syrian passport.

You can loose everything in one day. Everything: your country your friends and everything you had and saved. The only thing to do is to stand up and continue the struggle. And sometime life might be faire and you end up with a prize like The Lion of the Future from Venice Movie festival.

The movie will be also in the first feature film competition at BFI London in October 2018 after the success at Venice and Toronto Movie Festival.