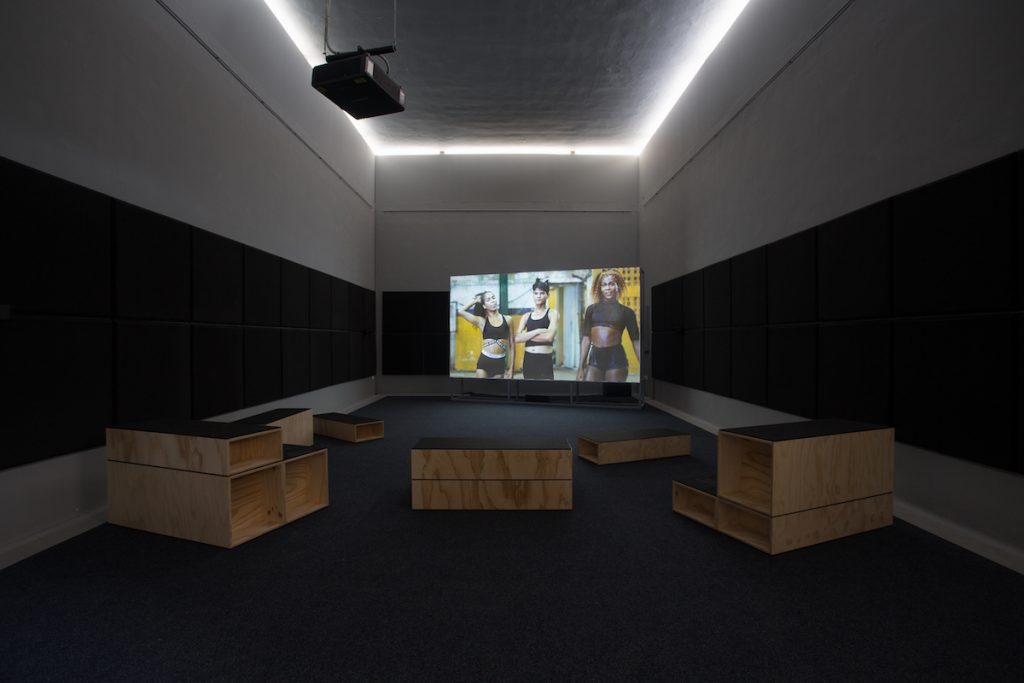 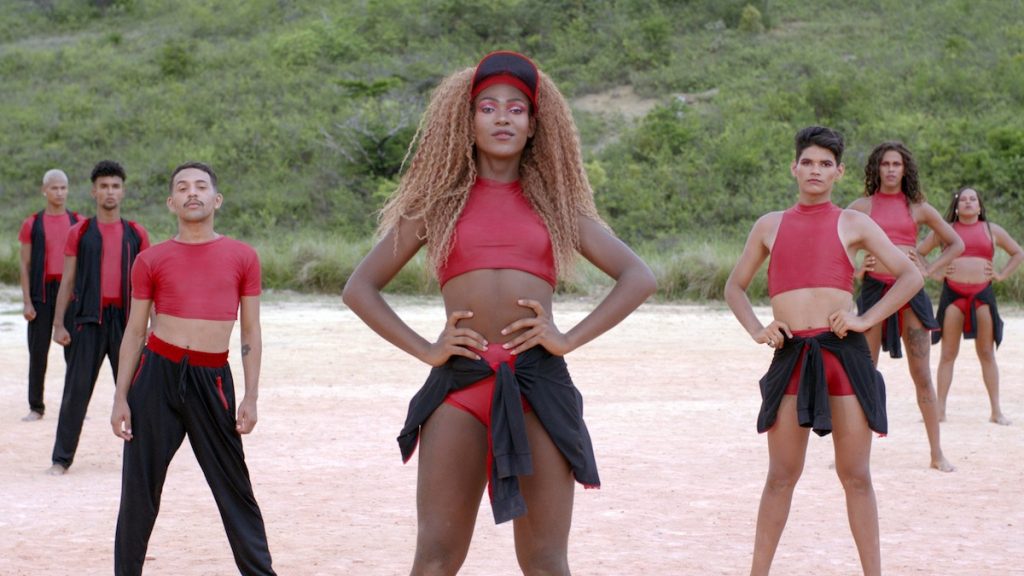 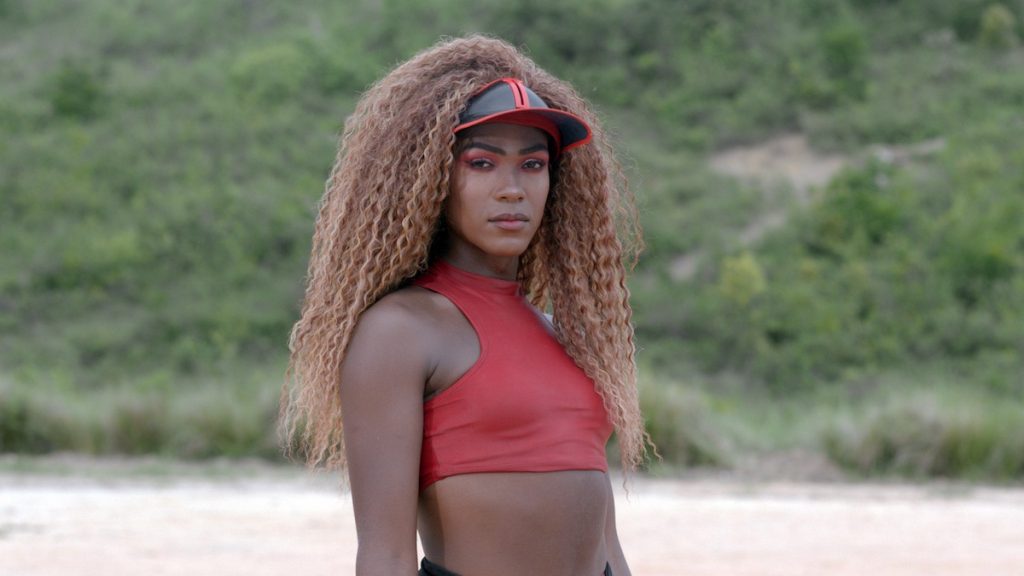 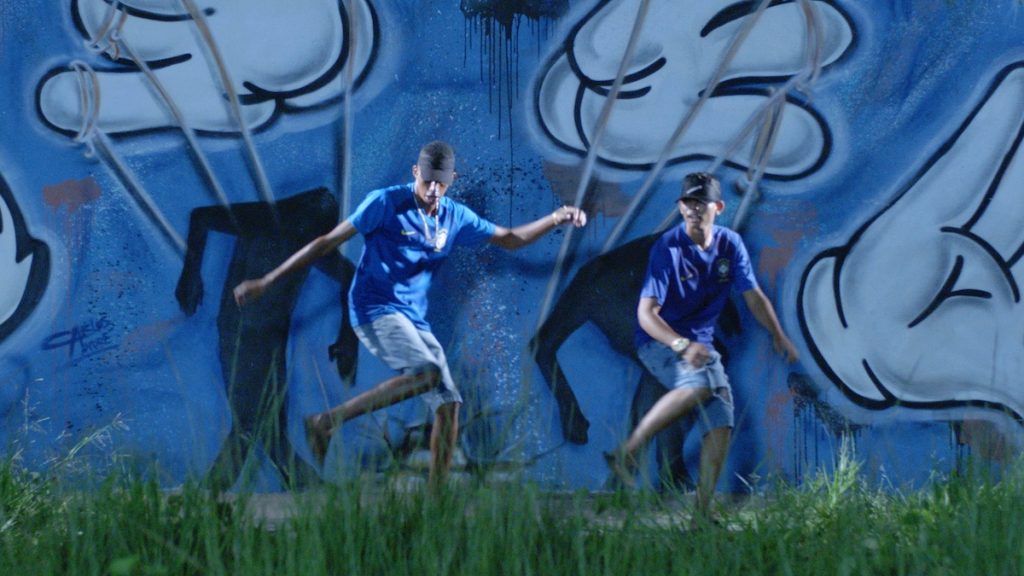 Bárbara Wagner & Benjamin de Burca, cane for their first time in Venice (Italy) and, for their first time also,  are representing Brazil (she is Brazilian) at Venice Art Biennale (Italy), bringing to a world audience an installation on two channels and a series of pictures and posters entitled Swinguera (taken from their latest movie). The piece is meant to be seen on two screens which can depict a different unfold of the story!

The touching movie, telling of a Recife based dancing queer community of the actual Brazil (lead by right wing president Bolsonaro), is on show until November 24, 2019 at the Giardini (of course at the Brazilian Pavilion – a very modernist architecture designed by Oscar Niemeyer).

Barbara was born in Brasilia (1980) while Benjamin in Munich (1975). They investigate the power and the language of musical traditions to depict, tell and make alive an idea of community and of nation.

Film is their favorite media and a very uncanny documentary style their signature. Recife is often the horizon of their world and is not a ‘neutral’ piece when they’re coming to talk about the enormous country they called theirs: that place is embodying many economical, political and racial issues nowadays.

“Swingueira is a sort of updating of a set of traditions such as square dancing, thesamba school and the trio elétrico [mobile sound systems], practiced autonomously and independently by youths who get together regularly in sports courts on the outskirts of Recife,” explains Bárbara Wagner. “Born from the need for social integration, this phenomenon includes the experience of identity and has arrived at the stage and on Instagram as a sort of spectacle fed by the mainstream, but which survives absolutely outside of it,” she adds.

The film accompanies rehearsals of three dance groups. They are mostly transgenders and representing mainly the black community of a country where the mixed marriages are very popular on every latitude of its wide and contrasted territory.

“The actors participating in our films are people we know firsthand and with whom we collaborate for developing the film’s script. In the filmings, in front of the camera, the character they are playing is themselves, since this sort of knowledge carried in the body is what we want to analyze together with them,” the artist says.

Your life in a few lines beyond your artistic curriculum

Barbara: We both live in Recife but we’re not from there, I come from the North East of Brazil in the district of Alagoas (the city is called Maceiò) and then when I was 16 I moved to Recife which is 200 km from there, in the North.

I’m not much worried from where I’m from. There is a very peculiar colonialist history in the North East of Brazil.

I think that the fact I was trained as a journalist, that I was starting to work with photography and then I was interested in popular culture, all was informing what the main interest of my artistic practice would be for a couple of years before I met Benji.

In 2011 we started to help each other by still keeping our works individual, our first collaborative piece dates back to 2013.

Benjamin: Yes, we’re starting to help each other and then we merged in a way that still takes in account our similar interests but two ways to look at the world.

My background is not similar to her, I was born in Germany and grew up in Ireland, on the West Coast. It has been always a destiny to be an artist, actually. It was at a certain extent boring because I come from a family of artists, therefore what happened to me is the opposite happening to other youngsters who are maybe forced to become a lawyer when they want just to study and make art.

I lived and studied in Scotland and Northern Ireland then I moved to Berlin where I met Barbara and then we moved to Brazil.

So, I lived a bit everywhere.

Did you watch Rize by David LaChapelle and if yes, what do you think of that documentary movie?

Barbara: I didn’t but many people showed it to me. I found interesting how people connect our work to the conventions of fashion photography or music video.

I think indeed your DOP is quite striking and very different from LaChapelle’s one in Rize. What I found very similar is the work with a community because this photographer did exactly the same as you did by being into it and not outside watching and grabbing bits here and there and sticking them together in a very ‘fashionable’ way.

Even if the community is not the same – in his case US white and black, remote, deprived, drug addicted people with a broken family background and in yours mainly the queer black Brazilian.

I ask this because certainly Recife is not the richest part of Brazil.

Benjamin: I see, I wish I could comment but I don’t know the film, but it shares the last title of the film we did. Now that you mention I’ll check it out!

Venice Biennale this year is rich of stunning movies signed by artists (we’re going to interview them all and we’ve started from Larissa Sansour, the Palestinian artist representing Denmark) but yours is one step further in my opinion. And I’ve also felt a very political intent but I may mistake.

When the choreography leads the main dancer (she was here around us actually in Venice, outside the pavilion, when we have had this chat for the interview: she was rehearsing a bit of dance with Miss Poland in favor of cameras of some International medias, yes, this is the Venice circus of the opening days!) to interpret ‘order and progreso’ the words on the Brazilian flag, that meant to me a sort of critique in dance to the new Bolsonaro’s ideas for the countries on gender (in)equality, on women de-emancipations and so forth. Do you agree about that?

Barbara: I think is impossible to don’t see the work from a pair of political lens and of course it is a very political work. It couldn’t be otherwise because we are talking about people – the queer community and women – who are now targeted.

What is beautiful about that this dance project is that it was already developed before we met it. From 2017 to 2018.

We really liked the fact they’ve precisely developed this act you’re mentioning in their choreography which indeed lasted 15 minutes (we took only four minutes of that partition which is at the beginning of that swinguera).

They build choreographies and train on that for a competition happening once a year (unfortunately we’ve lost it this year because we’re here in Venice!).

They develop a theme each time and the one of this specific piece you’re quoting is about immortality, actually, and not nationalism. They talk about a phoenix. The teacher, Diego, who is also a dancer of the group and has a natural talent to be the choreographer, put together this piece.

We actually did not choose the group who is the subject of our documentary piece. We’ve been introduced to them by Edoarda with whom we’ve worked already in 2015. It’s a combination of chances and intentions but also intuitions.

This very political viewpoint also derives from the fact that we’re in an artistic platform, the Venice Biennale, with its national representations but at the same time I would say that the value of bringing this specific part of choreography to the work is much more for opening up interpretations about what belonging to a culture means. Because for them this is, very much, an urgent issue: to be seen as citizens.

They’re claiming for a citizenship in the way they are. They want to know what the state would provide for them.

Nationalism in that very case has to do with its origin in term of class, race and now of gender. This is something that is not possible to be understood with a superficial look. It has to be seen and how they build an identity through dance brings a form of imagination about a nation that eventually has the honor to the flag but is not something we would be happy to use as a pamphlet to say ‘ah, this is a formal provocation to the type of Bolsonaro’s power right now’. We’re also not making propaganda by presenting people you don’t expect to see in Venice representing Brazil and which surprised us very much.

I agree very much on this last point: you’re bringing the Brazil stories we’re not expecting to see but you were able to translate this for us with lots of poetry. Especially their intimate moments, when they think or are on their own or seem to get in love through a moment of dance. Your narrative is very powerful and goes beyond the documentation of a dance and community project and tells them as ‘human from this worlds’ to favor their acceptance also by not queer communities and also in this very authoritative Brazil.

Barbara: all the narrative is made by them, we did not add or put or stick something upon!

Benjamin: And the story very much unfolds variedly depending on which screen you’re looking at it!

Barbara: Yes but now she is talking of another very specific scene: imagination is part of the real flavor of art. What is true and what is not is always complicated to define but in this case we’re just showing what they’re doing and nothing more.

That choreography exists and is a fact but when they bring it to be performed for the camera, of course we have to think on the ‘how’.

As a team of people working on visual art and cinema, we reflected on how to use light and movements, how to use space, how to create the costumes that is something which already exists (we just helped sometimes).

Of course there is a ‘back and forward’ between us and them on everything.

A Brazilian literary author you would suggest our audience to read?

Benjamin: I’m honest, I don’t read so much in Portuguese but there is one author I would love to suggest…

Barbara: When we were in the research process for Swinguera, the cinematographer discovered this author for us. She created the formal fiction out of a diary. She is Ana Maria Gonçalves and the book is Um Defeito de Cor.

Benjamin: it has been the first book I’ve read in Portuguese.

A last question, not as artists, where about next?

Still in Brazil, will you change your domicile? It’s not a political questions….

Benjamin: I would love to see myself on this planet still able to be along with everybody else and given that we’re speaking from a sinking city we need to address this to anyone!

The cover picture of this interview is depicting Bàrbara Wagner e Benj de Burca in the Recife mangrovia forest; the other pictures of the gallery are coming from their piece Swingueira. Look for their movies on Vimeo