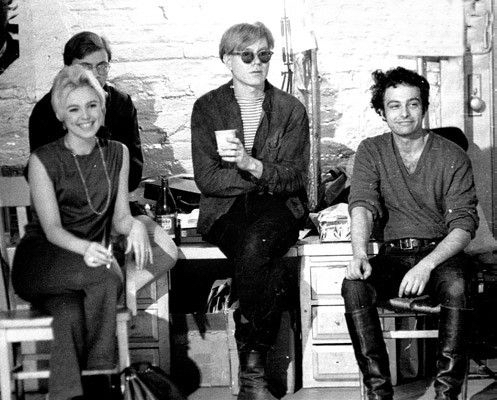 Memory is not just a resurrection of the past but is also an emergence in the past of others, and going back to my early days in Paris, Piero Heliczer is one of those unforgettable others. His presence returns as a fleeting image of a small and rather beautiful man, about my age, twenty-one or a little older and yet his imprint remains strong. Piero was above all, exceptionally bright and extremely talented, but sadly he was also his own worse enemy. At the time I met Piero in 1959 he was living at 18 rue Descartes, in the 5th arrondissement near La Contrescarpe. He and his partner Angus MacLise had founded the Dead Language Press, a small poetry magazine. Somehow with little or no money they managed to publish Jack Smith’s The Beautiful Book and Henk Marsman and Gregory Corso’s A Pulp Magazine For The Dead Generation. An astonishing accomplishment especially as the paper was likely to have been borrowed or stolen although at times he claimed he had received a donation. He used whatever type he could scrounge for free, often-incomplete alphabets and even some with broken typeface for his printing press. Surprisingly those Dead Language Press publications were often amazing chefs-d’oeuvre of breathtaking beauty and originality. They are now collector’s items, if one can find them.

Piero was impressive, not only because he had published noteworthy and unusual work by unknown artists, but because of his deep involvement in the Paris subculture. His remarkable history begins even before he was born in Rome. His mother Sabine, a German Jew worked in a solicitor’s office in Austria. Few Jews believed there was any real danger, though most were aware of Hitler’s anti-Semitism. Terrified by Goering visit to their office, to explain the restriction that would soon be brought in against the Jews, Sabine had the family con­vert to Catholicism, only to discover that Austria was far from safe for converted Jews. With amazing foresight she convinced her husband, a famous surgeon, to pull up stakes and flee to Rome. Piero and his older brother attended an Italian school, where at the age of four, Piero was cho­sen as the ideal embodiment of the Fascist child for the Fascist propaganda film, Aqua di Primavera. A perfect twist and a perfect cover for their Jewish past until the Italian capitulation and the takeover by the Germans. When Rome became unsafe they migrated south. Piero rarely mentioned that period of his life, saying he didn’t remember much except his mother giving German lessons to feed the family and his father being arrested for helping wounded partisans. His father having been caught by the Nazi’s was shot against a wall in the local cemetery.

What’s important about Piero is not so much the sequence of events: immigrating to the States after the war, graduating top of his class in high school, and attending Harvard at the age of seventeen, as the consequent effect his early years and the death of his father had on his life.  The customary American dream promised him a bright future, but for some reason it was not enough and after a couple of years he bunked off to Paris. This is where Piero’s true story begins, and it begins in a rather dramatic way. When the boat docked in Le Harve he jumped overboard and was immediately arrested. Why did he jump? No one could work it out. Needless to say they found his explanation hard to believe. “I was so excited to arrive back in Europe, I couldn’t contain my joy and had to taste the water.” One is inclined to laugh but I don’t think he did it for a laugh. In France he lived his Saint Francis de Assisi existence taking pleasure in his poverty while expecting to be looked after by those around him. Later, when he was given a fairly reasonable sum of money by the German government, in reparation for their having killed his father, he gave most of it away to artist friends, keeping only enough to buy a rundown house in the wilds of Normandy. It is hard to understand why he didn’t use the money to buy a better camera or better equipment for his multimedia shows. His Ritual Happenings were very original and could have been as accomplished, as those of Andy Warhol’s had they not been quite so threadbare.

As well as poet and printer Piero was a prolific filmmaker and actor, collaborating on films, performances, and publications throughout the 1960s with Jack Smith, Andy Warhol, William S. Burroughs, and musicians Lou Reed and La Monte Young, just to name a few. With his 8mm camera he made his experimental films Satisfaction and Venus in Furs. From today’s perspective, it is obvious he had an amazing talent to sniff out the avant gard. In 1965 he got Velvet Underground, an almost unknown group of musicians in 1965, to do the music for his films. Velvet Underground admitted that Piero was actually an important figure in the musical development of their sound as his films gave them a new context to preform in, encouraging them to work on music that was different from ordinary rock & roll. The year 1965 was perhaps the most important year for much of the 60’s underground’s imaginative and innovative activities. For Piero, there is little doubt it was the high point in his creativity and eminence. The remarkable Walter Cronkite of the CBS News, always on the alert for an interesting story, decided to do a feature on “underground” film.  His first investigations coincided with a day Piero was shooting a 12-minute short called Dirt, part of the later unfinished 3 hour epic, with music performed by Velvet Underground. The CBS News crew did a 6-minute report of Piero’s film Venus in Furs, and included Velvet Underground, asking only that wear their shirts, as they had been topless at the first meeting.

“The Making of an Underground Film,” was a profile of Piero Heliczer and Velvet Underground, and turned out to be the one and only television coverage for both the band and the filmmaker.  It’s interesting that Walter Cronkite and the CBS News also showed 30 seconds of a Brakhage movie, with poetry by Creeley/McClure a sort of stutter-stammer rapid-fire montage made up with hazy images. All very difficult to understand or make head or tail out of it. Writing about it now, I wonder what Cronkite thought about it. Maybe he dug it as people claimed but it was unlikely that the CBS or people watching the program took the underground seriously. Was it all just a joke to them? Was CBS News making fun of the underground scene or just having fun?

Piero continued to stage multimedia shows, which he called Ritual Happenings. They were both exceptional and eccentric with allsorts of floaty veils hung in front of the screens with colored lights and slides superimposed on them, dancers performed onstage and musicians played in the background. Andy Warhol, who was mesmerized by the Velvet Undergound and enthusiastic about Piero’s Ritual Happenings, began organizing similar events to Piero’s incorporating many of the same techniques and performers but on a grander scale. On the evening of his first Exploding Plastic Inevitable Andy filmed Velvet Underground playing the music for Piero’s Venus In Furs and Heroin, with Piero joining in on the saxophone.

There are variations as to who was responsible for Velvet Underground’s rise to fame but I think there is little doubt that Andy was instrumental in the making them famous. He became their manager, which at first meant little more than letting them eat, drink, take drugs, hang out and play at The Factory. However, Andy was no slouch when it came to commercial possibilities. Not particularly happy with Lou’s singing he suggested they get a singer and proposed Nico. A brilliant stroke of fate. During Andy’s multimedia event tour, Exploding Plastic Inevitable, in 1966 he recorded and produced the Velvet Underground & Nico record, which is still today considered one of the world’s greatest recordings.

Jonas Mekas, known as “the godfather of American avant-garde cinema,” organized the New Cinema Festival in New York in 1965. It was a series of wide-ranging multimedia productions that included Piero’s film The Last Rites with the work of other notables such as artists Robert Rauschenberg and Claes Oldenburg. Mekas was particularly enthusiastic about Piero’s film, declaring in the Village Voice that he saw glimpses of beauty and promises of the future.  Unfortunately that future was cut short when Piero was pulled under the wheels of a truck while illegally riding his motorbike and towing a cart of books on the Paris – Normandy auto-route.

We already published her essay What Happened to Feminism

This story is still unpublished and is a teaser of her upcoming book, Conversations with Cy