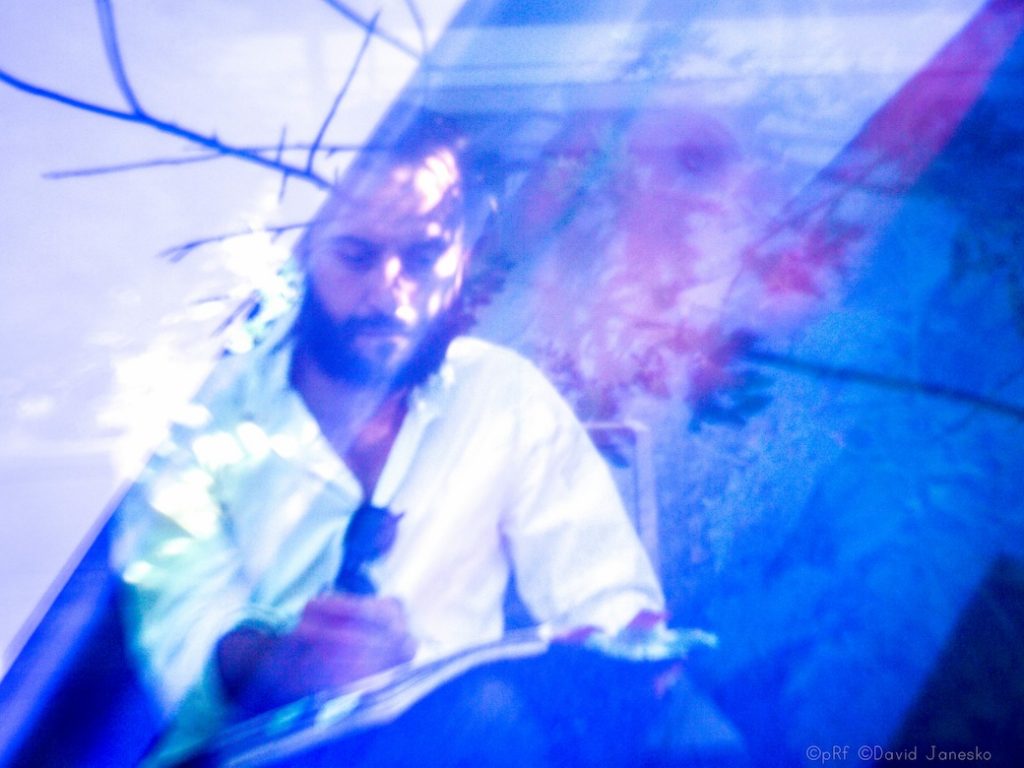 When I was 2 and half years old my parents took me with them onto a long journey from Terni to Kabul. We drove from Italy through Greece, Turkey, Iran and then finally Afghanistan. I do not know if a journey like that is still possible today, but I keep travelling as if a first thrust put me in movement. Of course a journey has not necessarily to be from here to there. I bring people to Heaven and Hell and sometimes I give guided tour of the Louvre without the Louvre. I ask people to walk backwards and to imagine the future behind their back and the past just in front of them. Out of Freudian jokes, I think I am working to become the journey instead of the traveller.

Many performers and poets – who are defining themselves visual artists, like Regina José Galindo we recently interviewed – seem to embrace bold and very bloody political statements.

Your ‘art of avoidance’ is indeed mixing with levity and unpublished styles either writing, performing arts and space design in a very different weight and structure, putting the ‘viewer’ in its centre, not the performer.

Your medias are also including music, dance and sound in the relation with narratives.

Which has been the inner spark to work in this way, so forth leaving apart medias as painting and sculpture or video-making – and of course, the idea of sacrifice or of challenging endurances, very present in other visual art performers’ works?

There are no inner sparks, even a stone knows that it needs another one to light up a fire camp, as much as I need your questions to reply these answers. I do paint, sculpture and I make videos – I also bleed when I fall on my nose or scratch my knee. Lately I even died on the stage, more than once. As for the sacrifice I ask a lot to the people who come to my performances and exhibitions. In London they even had to install the entire show otherwise there was nothing to see. Bold things cannot go through the slits and the cracks of people defences so I send tiny things like butterflies or smart racoons. For operations as such, I prefer the poetry to the rhetoric of the political statements.

Which has been your first act and which your last? Which are your secrets to regenerate your energy after each performative work?

Like mostly everyone I first draw a house, a tree, a mum, a dad, and a little puppy. When grandma asked me: and where are you? I said: I am here, with you. I did not draw myself in the drawing. I always try to escape representation, but it’s hard because to escape prison you have to be in prison, or being chased by a police dog. I die many times in a performance called Tamam Shud, which in Persian means something like “this is the end”. It’s a two hours collective incantation, and since I start from the end, the end of the performance is just a beginning, so no one is tired. The only way to regenerate is lying in the people when they love you.

How is hard to start and keep on such an intense artistic activity today in your cities (London and Paris), and, according to your experience, in general?

It’s hard. I haven’t done any art schools or academy, I do not belong to any art movement, I avoid categorizations, I avoid branding what I do, I even avoid living in London. Sometimes I look at myself mirrored on a window shop in Montmartre and I have no idea how is it possible. Dead men should cast no images.

Why Paris and London together? Which things are you taking from one and which from the other? What do you feel to give back to those capitals?

I still get lost in London, it must be because of the scaffoldings. They are like the witch curse in Hansel and Gretel, nothing looks familiar, and you never end up where you wanted to but always on a ginger bread store or right inside Prime Market. No one can be local in Central London. Paris is another thing, Paris has the Louvre, and the Gustave Moreau House.

My roses which I grow from seeds are so fragile at the moment. The little lemon trees need much care to survive winter at these latitudes. I have a Belladonna and a Digitalis Purpura which are highly psychotropic and the Datura just exploded its seeds everywhere the other day. This morning my cat was staring at the void and suddenly run after invisible things.

Which is the most important achievement (or award) after so many years as visual artist?

To see changes. The slow death of a certain conceptual art. And the understanding that formalisms work better on trees and plants than on a sculpture.

I was jogging in Headlands, San Francisco, when a female coyote just appeared in front of me. She probably could have talked to me, or telling me secrets, but I thought it was a dog so she kept silent. Then I saw a bee orchid, a flower which looks like a bee standing on a flower. It couldn’t talk but it showed me invisible bridges between things.

Bread. The word yesterday comes from yeast. It is the yeast that makes the dough growing during the night while you close your eyes and sleep. The growing of the dough testifies the continuity of the world while you are somewhere else dreaming. That’s why, in ancient time, they were used to say the yeast made the day, yesterday.

There is a secret garden in the heart of Montmartre. In this secret garden there is a wine cellar. We call it “la cave”. We open it often and we read poems in there and we drink wine. My favourite wine is that which comes with a poem.

I am writing my second novel now, it will be published next year by Sternberg Press in collaboration with The Book Lovers. This is the book which is always with me, and frustrating as it may sounds, I cannot read it all, it is not finished yet.

I am nothing, and nothing do not like to be represented, so I have to run. We are made of desire, and desire always desires something else, so desire runs fast. I have no time, there is no time, but if there is no time, no one is late. Now breathe.

I was in Greece centuries ago as apprentice. To become a poet you had to prove you are able to summon here and now, in front of the people, things that are not. Those were my years of studies around words and language, but I always wanted to be a singer. They can sing in any language, they do not need to understand the words, only the notes and melodies.

It is always the same thing, but if I tell you which one, no one would believe to me, because it is something that only life can teach, no one else can. But I have learned something from history: it is easily forgotten. And now it is too late to remember, we are called to fight again the same old wars.

Alex Cecchetti is an artist, poet and choreographer. He exhibited and performed internationally at Serpentine Galleries London; Museum M, Leuven; Serralves Foundation, Porto; Centre Pompidou and Palais de Tokyo, Paris; MAXXI museum, Rome; Contemporary Art Center Vilnius, Lithuania. This November he will perform for “Playground” at M Museum, Leuven, Belgium. He is now working on a large project of exhibition, performances and artist’s novel with The Book Lovers, CCA Warsaw and Sternberg Press. A solo show of the artist is in La Ferme du Buisson from October 2017.

The cover picture is Alex framed at Heaven and Hell, performance at Palais de Tokyo (Paris) by D. Janesko and Paola R. Fleming