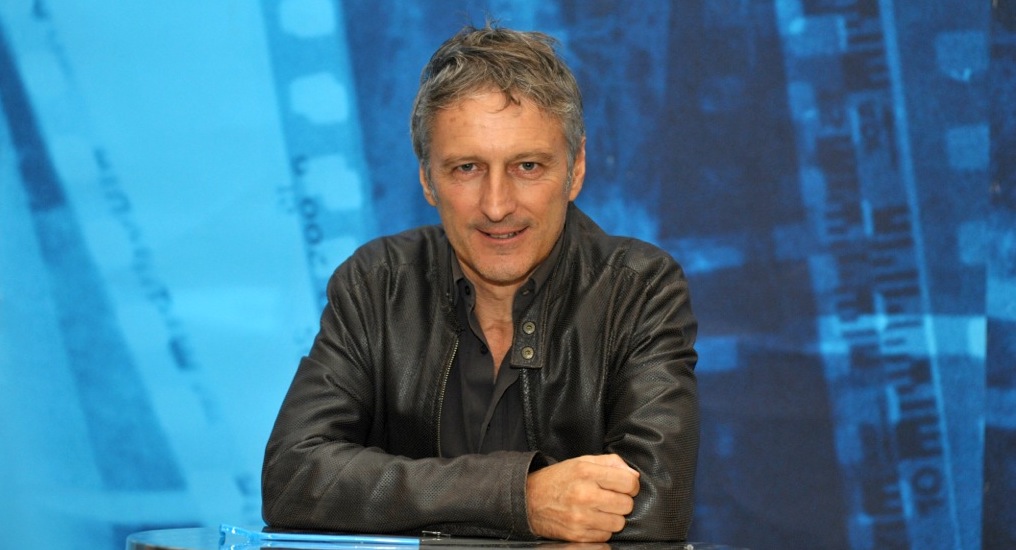 Your life in a few lines, with a peculiar accent on where you were born and grew up

I was an ordinary kid – sensitive and introverted but at the same time curious and sociable: music, playing soccer and hippopotamuses were my great passions.

My father was a workaholic lawyer (I was so certain to do not get stuck in the same habit but actually I am not very sure of having being able to). We’re really carnally attached – my grandpa was used to tease us (in Neapolitan: ma c’ata fa’ cu tutte ‘sti uommeche…stop with these sweet nothings). I lost my dad Carlo too early and I think of him very often. He would be happy now that his idea to avoid me to work in his sector (courts, papers…) by pushing me at any time to follow my not linear, evanescent paths brought me to have some tangible and fulfilling results now.

We like to investigate cinema through the act of writing and according to us the film editing is its most definitive climax. How did you choose to become a film editor and how also, later on, a director?

If you investigate the cinema sector through writing you cannot avoid to analyze editing which brings the filmic object to its concreteness and give it back all the good intentions found in the screenwriting.

I sometimes teach in cinema classes and my interest is exactly about the rewriting of a movie by using just the editing. I always start with a first raw edit of the chosen movie – I alway try to keep myself very adherent to the script – then I collect their first impressions, the tips on the kind of interventions they would have – cuts, scenes replacements – to improve the movie quality and then we watch and comment altogether the movie in its final edit.

Dialogues, the time scan of a scene, omissions, sometimes a total reinvention of the un-edited footage material: the movie coming out from the moviola is always very different from its screenplay.

More than choosing to become a film editor, it has been editing to pick me up, I am joking but not so much…

I always had a great passion for cinema, I was an amateur with Super8 but I was dealing with light design in theaters until I was 30 (I still remember those as high moments of creativity together with a very physical bunch of hard work if I also recall the debuts, the hundreds of boxes moved up and down from vans to theaters…)

In the first part of the Nineties, Antonietta De Lillo, Giorgio Magliulo and Paola Capodanno were starting in Naples Megaris . a production and post-production company for the movie industry: they were looking for a technical manager. They’re rather searching someone not particularly skilled but with a very similar sensitivity and cultural approach in order to grow up together. So they picked me.

It was a great challenge for both of us: I was earning well with theatre at those times while with them I would embark myself in a totally unknown situation; they were putting in my not-skilled hands a very well equipped studio with avant-garde tools for the years in which we were (it was the first Avid station south from Milan). The braveness always pays back.

Director? No, I never intended to be that, there are already so many mediocre directors around. Someone proposed me to sign some jobs as director and I did it with the maximum diligence but that is not my business: being an editor in order to source the best from things made by others is my job.

Joys and pains from when you started to today – given that now you’re one of the most requested Italian editors?

I was pouring in that cut-up a lot of my loves, from the Billy Wilder of Sunset Boulevard to the Welles of Otello, to Russ Meyer, to Buñuel just to quote same of them. But the crucial title of the work was Rear Window which more than any other movie shows the real nature of cinema: the voyeurism. Nothing new, for sure, but just a very powerful edit to show the untouched success of Kulesoy’s effect after 80 years this theory arose: the original dialogues of the Hitchcock’s movie seemed to be written just for the new POV shots (point of view or subjective camera) together with the close-ups of James Stewart and Grace Kelly.

The following year I edited 180 seconds from the 26 minutes of the original work. They were only about Rear Window and with that work I won at Anteprima per il Cinema indipendente in Bellaria maybe the most important award for me, for sure the most unexpected. It was exciting to win the first Ciak D’Oro awarded to me for the edit of Tano da morire, the David di Donatello with La Ragazza del Lago has been a consecration, but at that time of those awards I was already making lots of things.

Among the most recent joys, there has been the meeting with Jonathan Demme, a person I will keep forever in my heart for his very human grandeur.

The torture to still work for a job I love is that the pains are not so big. I can only talk about some sorrows which are linked to the scarce fortune of some movies I found beautiful but remained unknown to the most part of mankind (do not believe to the ‘magicians’ of the distribution: the calculation of the success of a movie at the box office is very far from science).

For sure now I feel small intolerances which I attribute to the fact of becoming old.

Patience is indeed a crucial prerequisite for anyone wishes to do my job: being welcoming is a fundamental requirement for an editor, when the director arrives at the moviola station at the end of the movie shooting is in a very fragile emotive situation and is very vulnerable, the vision of the first scenes is almost always a trauma.

Another thing can really test the tolerance of the more saint among the film editors is today the possibility of anyone to get access to the easiest editing softwares.

When, in a closer future, the Monocratic Filmmaker will encase all the professional roles today surrounding a director, the self-referentiality will finally reign everywhere.

What do you receive from your city and what do you think to give her back?

Me, a very unusual Neapolitan because not at all superstitious and without a predominant accent (in the bourgeois families we were used to speak a perfect Italian so I discovered just recently, as adult, the pleasure to drench in the roundness of some dialectal words), have such an innate attachment with Naples.

When, at the end of last (!!!) century, the majority of Neapolitan directors with whom I was working left the city, many friends were thinking that I should move to Rome too in order to give to my profession a boost.

I kept living in Naples and, at the end, I was able to still keep my professional standards in a good shape. Sometimes I have to be in the capital from Monday to Friday but mostly now I’m able to work from home, in my inalienable moviola studio facing the sea. I also think that one of the flaws of Italian cinema is to be so Rome-centric. Which means to loose its roots, the touch with the real world, with the stories that anyone embodies if coming from different cultures and last but not leas the fact that if you spend so much time there you will be only with movie industry people: people making cinema speak only of that.

I owe to my origins the attention I pay to musicality, to the breath of sounds. Some directors I really take in account often remarked my specificity in editing dialogues as they’re music. Some colleagues underlined my cuts ‘in levare’. I love music, but I am not a musician. Making movies is my way to make music.

Which relation do you have with literature and the writing of somebody else? And how do you define yourself as a reader: ways, places, times?

My answer could seem not focused but I would love to summarize my approach to edit a sequence. A first draft before countless re-writing.

More than get stubborn on a scene I do not immediately get, I prefer to sit it aside and come back on later (to make it short: I get content more with patience, by waiting more than to spread an obsessive tenacity, I love the chisel more than the scalpel). Pause. Literature.

When I was attending the high school my friends were suggesting me to read Borges’ Fictions. I tried it but I soon surrendered: Tlön, Uqbar, Orbis Tertius were an hard start for the kid of those times. After a couple of years I started again to read it and became the favorite book of my teenage times and JLB (Borges) my favorite writer. The short movie I always wanted to shoot was a reduction of Las Ruinas Circulares – I still keep with me the notes of this idea somewhere – and in every journey I am looking for the temple and the beach for the mise en scene.

What this means if related to my job, you could argue. I try to reach the point. If in relation with complex forms of artistic expressions (literature, music, cinema – I took a little to fully understand the grandeur of Remain in Light!) I learnt to do not get defeated by the hurdles without trying to find another viewpoint, another angle to tackle things which at the first sight are unreachable.

Since that for me giving up is not an option, I do read a book from the first to the last page.

I could say that the only thing able to detach me from the work is a novel intriguing me a lot together with playing soccer, which stands as my true activity rather than the editing…

As always happens to anyone, I can read a lot during summer time but I always spread a dozen of books on my bedside, in my studio or together with me on the Frecciarossa…

Beside the very recognized masters – what can I say here, Capote, Celine, Pasolini, Flaiano, La Capria, Conrad, I just quote the firsts coming up in my mind –  I love to search for less known authors. Lately I’ve discovered two books: Steps by Jerzy Kosiński and La Terra del Sacerdote by Paolo Piccirillo (I promised this book to Antonio Capuano because I’m sure he can make a wonderful movie from)

The music and the book with you now?

Which is a very secret (or very secluded) place you reach when you like to pause or, if you like, to slow totally down a bit?

Procida, this island became my shelter since 20 years. Every morning I see it from my terrace in Naples and she calls me there. The sirens exist for real, here in Naples.

I am really uneasy to imagine myself tomorrow, can you imagine in ten years from now…?

I could maybe tell you my ambition: to see myself on a rock – in Procida, as told or maybe in Donousa – with Gaty, the woman I love since more than 30 years. To enjoy (only as in a mirror!) the happiness of my sons.

What did you learn from life until today?

Resolution, kindness, passion for what you do, culture – talent if you have some of it – help. But to be in the right place at the right time is not something you can work on.