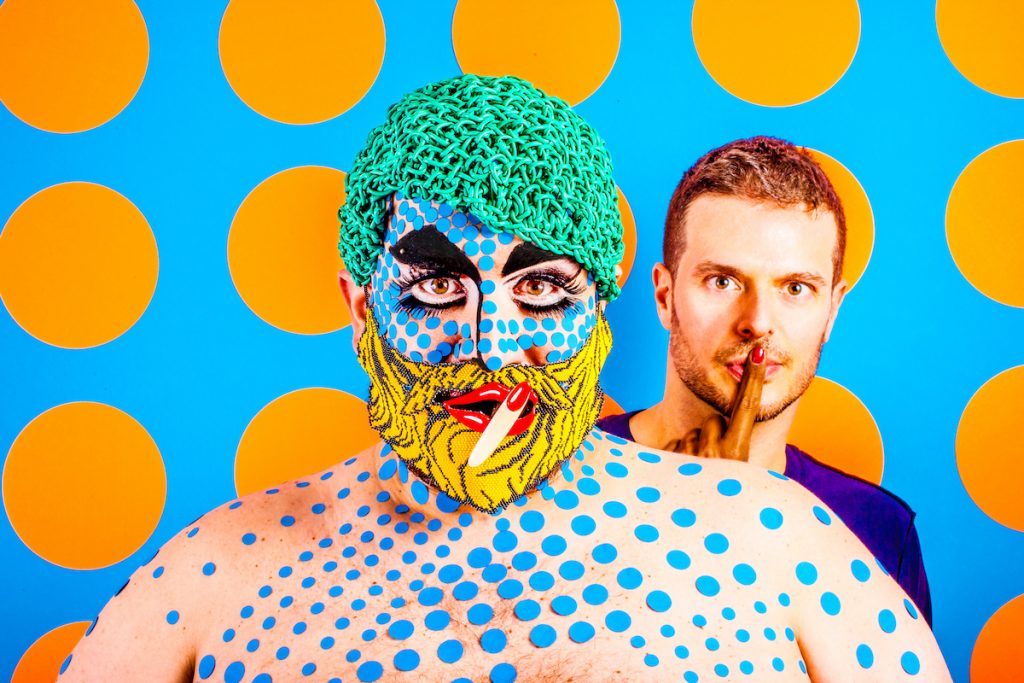 How did you find each other, Hard Ton, and how your project originated?

Mauro aka dj Wawashi: we met in a chat for bears and their admirers. We then understood that both cultivate the same great passion for music even if from different perspectives.

Max: Yes, him, the house music underground dj and me, the heavy metal singer, doesn’t matter how much we both insisted in contaminating the music knowledge of the other, at the end he won!

On the more personal side, which is your background?

Wawashi: and the best friends.

One half serious question: did you watched the Italian pop festival per excellence? And a serious one: which place your artistic project has today and which one you would love to reach?

Max: I watched only bits.

Wawashi: No, no Sanremo for me, I do not even have a TV at home. I know, it’s very radical chic to reveal this, but it’s also the truth.

Max: To be honest, we never considered ourselves in relation to the Italian musical panorama.

Wawashi: I wanted to work with the labels I was listening to and whose editions I was playing in my djsets, and they are all from Germany, England, Austria…I never asked myself to undertake a different path from this…

Now the deepest and the most serious question: which place should have, according to you, a satirical register in our musical panorama where singers and songwriters à la Cody Chessnutt or à la Nouvelle Vague are not abundant…

Wawashi: Ironical and satirical register is one of the many possible to address the message you want to give. And any register has to be fitting either the message and who conveys it. We started from a precise fact, Max’s corporeality, and then from the will to transmit positive messages – including pride, joy, sharing, brotherhood (or sisterhood). The ironical feature came after, by itself, in a certain way as a consequence, pretty natural, to these premises.

Who does prepare the beautiful costumes of your performances? Which is your favorite inspirational path?

Max: every costume has its own history, a person who designed it and another one who made it.

Wawashi: They’re mostly made by some tips from us – ideas coming form the most diverse sparkles …a catwalk, an art book, an exhibit, a theatre piece…

You live in two different cities and I guess you also tour a lot in many others so maybe you do not often point on the topic I’m going to ask you. Can you tell something about your relation as citizens in your elective city – I guess Mestre for Max and Bologna for Wawashi? What do they give you and what do you feel to give them back?

Max: I was born in Venice, I was raised here and I studied here and I still keep marvelous recalls all tied to a city which is still the most enchanting in the world for me. And then, oh the Carnival…this gorgeous collective rite which was subverting any rule, made of costumes, maquillage, excesses. Now I live in Mestre, less fascinating but ways easier if you have to commute quite often.

Wawashi: I moved to Bologna to enroll to the university and my roots were since then here. Bologna gives me what many Italian cities give to those living there: beauty. When I have let being down or simply when I need to recharge my batteries, I go out,  go downtown better if in the evenings or nights, when streets are empty or mostly so, I walk glancing around. Beauty is healing.

Which is the music you’re listening now when do you reply to these questions and the book you’re reading in these days?

Wawashi: I’m listening to a marvelous Dj Spin remix for Black Motion, pure house music with vocals urging you to dance by hanging the hands on your head. I’m finishing an essay on the presence of eunuchs in diverse civilizations, from the Egyptian one to the ultra-catholic Russian ones.

Max: in these days I’m listening many times our new album (it’s from our side project with Adriano Canzian and performer Gaia Brigida. We’re called The Fool’s Stone). It will be released by David Carretta’s label. I’m proud of this project because it gave me the possibility to express myself in a different way than in Hard Ton, and, being a very heavy metal dude, I love the darker sounds and the harder one we had chosen here. I’m reading a book of Japanese recipes, I swear, sooner or later I have to go on diet!

Mauro: I’m more prone to culinary obsessions, i.e. eating something for weeks until I have nausea…at the moment I’m fixed on whole flour pancakes with tuna and orange. I know this stands for an heresy for any Puglia-region born who is reading!

Where do you see yourself as Hard Ton within 10 years?

Max: On Mars, and always fabulous!

Max and Mauro, what did you learn from life so far?

Max: to be interviewed…

Mauro: to be patient…

Next, very next Hard Ton lives will be in St. Petersburg on March 10, while the next djset will be (a Wawashi one) in Berlin on March 16. Check their social to learn more (where, when) or to discover the far next ones. We truly hope to invite them to a Slow Words party.

To buy their music, their cassettes, their cd, their fantastic gadgets: