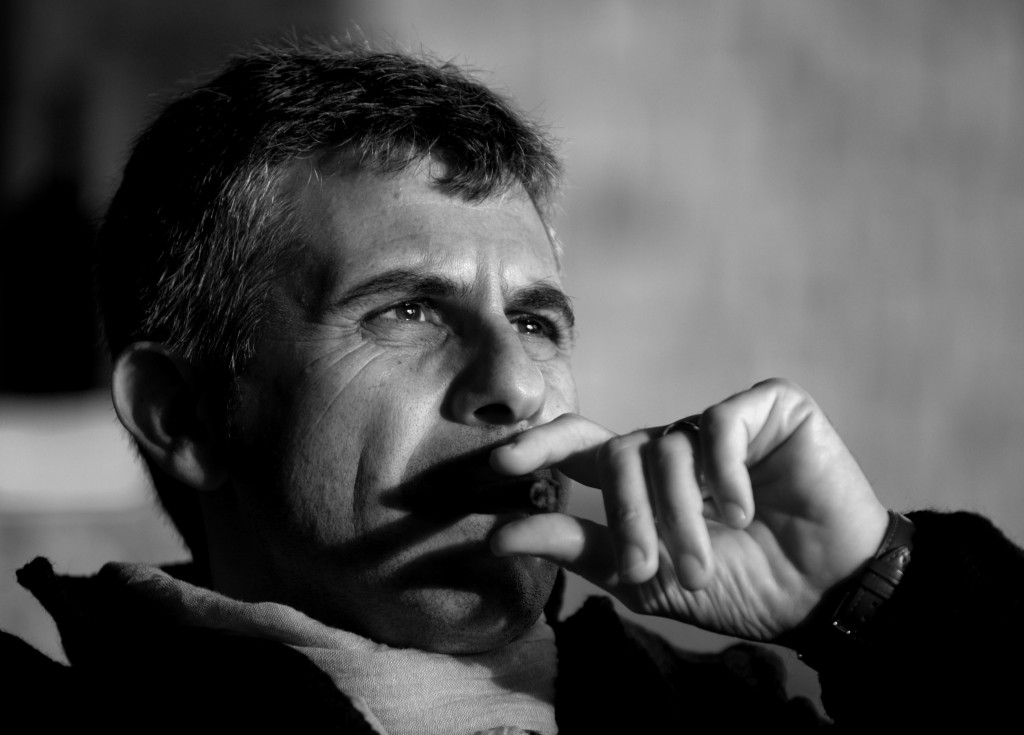 Hanging between the north and the south, I meet Piero Mastroberardino on the eve to a series of presentations of his latest book of poetry (two of them are published in the Poetry section, together with this interview), and just a few weeks prior to the release of his second novel, expected in October for the chaps at Homo Scrivens (Naples). The first book, Umano Errare (ed. Albatros, 2011) is infused with a writing style cultured and a refined, implacable introspective analysis on the characters that are part of the story. Emotion after emotion, happening after happening, relentlessly.

Then again Piero, age class 1966, by profession is neither a poet, nor a writer, nor a visual artist (he also signs the drawings illustrating his poems). He’s an economist, specialized in management. He deals with decision making, a particular social research field, where he places himself somewhat unconventionally in regards to the dominant culture within the economic field of organizations and he is particularly interested in the relationship between man and organizations. He works (he is full professor) upon an alternative vision of the world which is different from the mainstream one which has prevailed during the last century (“that proposes an the organizational world in a mechanistic or organicistic fashion, a vision of a system which is predetermined in regards to the actors”). “Dissenting from many, I think that it is less naïve, in some aspects less hypocritical, to accept a view of organizations as systems built day by day, moment by moment, and continuously dismantled in the continuous interaction among individuals, groups, coalitions which coalesce around interests to be pursued, breaking and rebuilding, without pause, their own operational cage”.

He’s part of the club “Amici della Domenica”, panel of judges for the “Premio Strega”. And with the family-run business (Mastroberardino) he guides, he produces excellent wines. He happily lives where his business is located: In Irpinia, land of traditions, valleys, and thousands-year-old communities. Where the Romans, for the first time, were beaten in their inexorable advance as conquerors.

Your life condensed in a few lines

I wouldn’t know, really. Several are the faces, which make it up. Leaving aside the best years at the end of my studies, I launched at once two different professional experiences, one entrepreneurial, originating from an old family of winemakers, the other regarding scientific research. Both paths have absorbed me and offered me a lot, each helping me live better the other.

An important role is held by the figure of my father, even beyond his recent passing away. A cultural reference-point but also an example of business determination difficult to follow, for he was a real force of nature.

Next to these two work paths my passion for drawing and writing ran alongside, at times in a discreetly, at other moments much more harmoniously. They are in different ways therapeutic, but both carry out an extraordinary function… sometimes they almost seem like some kind of homeostatic gimmick. Then I realize they are open frontiers, keys which always open new places, also in small steps.

Cities you’ve lived in and the ones you would have liked to live in, having maybe visited them for a brief moment free from the daily chores.

My work often has me travelling around the world. I’ve seen a lot, experienced both for professional requirements and sometimes for leisure. I’ve felt what it is like in the most developed as well as in the most underdeveloped areas. I’ve seen the huge, glittering and shallow waste go arm-in-arm with the grimiest misery. It’s really a strange world.

I miss ‘black’ Africa. It’s a vacuum that needs bridging, a kind of calling. I think it is a call to understand. But I’ll take care of it some day or another.

What have you given to Avellino and what has Avellino given to you?

I don’t know what I might have given to Avellino, I live here and carry around its name. It’s the city I grew up in, which I’ve explored as a kid inch by inch, a city of more or less faded memories and unfortunately an equally lacklustre present.

And then again each time I return from a trip I joyously breath-in that sense of oxygen offered by nature. Around, on every side, intense green, woods and mountains. It’s a great place to live despite the socio-economic problems. It’s a community which needs to be revamped. Provided you banish all the clichés and start again from the most simple things.

What was a recent moment that made you feel happy?

I must admit I’ve never been very expansive. The happy moments have been many and yet they wear out quickly. Every outcome obtained, the minute it is reached, it dissolves. I don’t think it’s that uncommon. Opening a book, just printed, or lingering on a drawing just completed…

Come to think about it, what makes me most happy is melancholy, if you manage to live through it without quelling it too fast, if you’re fortunate and know how to nurture it without frightening it away. Melancholy stays there keeping you company, allowing itself to be sipped.

Your dish and your favorite drink (especially amongst your wines)

The favorite dishes are the ones issuing from memory, of home. For me “Sartu di riso” (rice timbale) and “casiatello materni” (egg pie),from my Neapolitan family tradition side. My mother left her mark, with her extraordinary capacity to be in the world in such a thoroughly discreet way. And the moments lived with her I recall as if they were today; despite having a really disastrous memory. They often inspire profound pages of text in my writing.

Amongst the wines my favorite is a little gem, Naturalis Historia, a Taurasi DOCG, of such soft and fine texture, a confluence of elegance and style… but we’ve already said enough about wine!

Crucial as a low cross-over, reminiscent of one’s favorite flavor, similar to the furnishings in ones own house of thoughts, your poetry is conveyed through harsh lines but never forgetting irony and wit (typical to aphorisms and anyhow of a rhapsodic style of writing) to describe, at times, the fierceness of the real life. Besides to novel writing and verse, have you already experimented other forms of writing that blend styles or even other forms of language (maybe visual)? If you’re contemplating it, towards what will you be heading?

I’m unable to project or think about the things I’ll be doing. I move about by instinct and then, at times, perhaps, after, I rationalize.

Novel writing by now has been an experience of many years, I still have about ten diaries from bygone eras from where fragments of stories arise… sometimes I have fun going over some pages. My next novel, out next autumn, has some contaminations…but I wouldn’t want to make any anticipations. At the moment my thoughts are concentrated on this presentation phase of the collection of poems “All’origine dei sensi”. (At the origin of the senses)

When do you decide to use writing and when painting or drawing to express yourself?

Verse has a relationship to the novel as drawing has to painting. I love to capture states of mind and exhale them in one breath. In this way drawing triumphs today, this way short poems are triumphant. The more the form of expression becomes fundamental, the more it seems to me efficient, fulfilling, crystalline.

The novel has its own fascination, also immediate, since I find offcuts of scattered melody and somewhat hidden, amongst the lines, at the heart of any one page. I’m nevertheless aware that there’s a lengthy and repetitive organizing work to do.

Sometimes I feel empty when drawing but living when writing, sometimes the opposite happens. This is also a way of finding again vitality and expressive capacity, which of course, is not to be found cheaply.

Does it still make sense to teach and do research nowadays? If so, in which direction are you heading?

Yes it makes sense just as it makes sense doing whatever one feels emerging. I really enjoy doing research; even nowadays I experience it regularly. I’m set towards trying to contrast ingenuity and hypocrisy, which unfortunately can still be found in certain research programs, done more by isomorphism rather than aimed at really contributing to the debate.

Teaching also remains interesting as a moment for discussion, but the increasingly difficult university situation weighs down on this entire sphere. The students are fully aware of this. We carry on under unstable conditions.

I live on stage in all these spheres. At the firm I spend much time in front of the public. The same happens at university. Although I’ve not yet experienced exposure to huge crowds, even on the artistic front I must say I’m experiencing interesting and new moments of discussion. In all these spheres one meets all sorts of people. It’s a good thing being prepared for improvisation, it’s a mechanism for self-defense…

A talent you have and one you’re lacking

I’m lacking many… actually more. Amongst other things I’ve the feeling of being dispersive, contrary from what might be perceived from the outside. By nature distracted.

A talent I have is for taking things going on, trying to get things done.

How do you find the time (and what do you do?) to live slowly?

Abstraction, I stop, I close myself only with my own company and listen to myself. I don’t always manage but when it goes well one feels great.

Living moment by moment, not giving in to the false flattery for making plans, building up the real whilst living, being inspired by games when dealing with the most complex situations.

For each one of these assertions one could write a book, but in extreme synthesis these ideas help me to live. I’ve obtained them over time, not in a particular moment, but I feel them from within and I feel good with them.