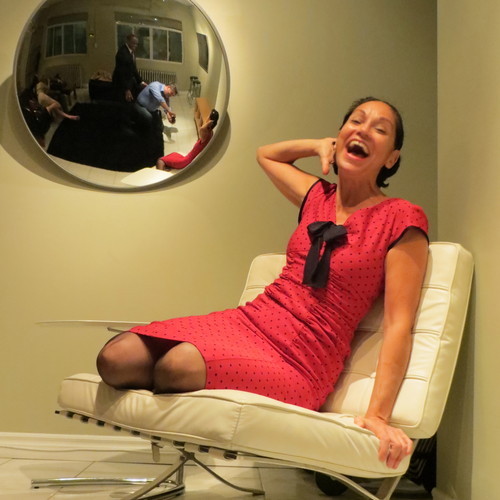 No words at all. When you’re lucky to meet such a vital and kind person as Antonia Swann, you wish to be her friend for all your life.

Adventurous, discrete, open-minded, one of the best persons to hang out and dance because dance is much more than spare time to her, but a freedom act and a subtle religion together. She feels the world in the best way: being surprised of it day after day – it doesn’t matter how heavy the day may be. She is the perfect incarnation of our Cesare Pavese’s quote in Slow Words About section.

And her smile – a planet of arising questions regarding her secret of being happy, happy and happy again, always and forever.

And her life – a small treaty about loving human mankind, whatever the costs may be.

Your story until today

I am a singer-songwriter, originally from Winnipeg, one of Canada’s coldest cities. I remember being 10 years old and having my eyelashes freeze together at -44 F one winter! I was on my way to the bank. I don’t know why!

I trained as an Economist after my family moved to Toronto following my dad’s death. Then I turned back to music as my main passion in life. I am now exploring film making.

My city Toronto is giving me access to world-class music facilities and therefore a chance to hone my live sound as well as my studio sound.

Toronto has many live venues with open mics and I took advantage of one in particular – The Free Times Café – and I started learning about what is it to play live. For about a year, I religiously forced myself and my guitar to get up on stage most Monday nights, at their Open Mic. I’d go right after my creative writing class, which was just down the street from the Open Mic in order to overcome my stage fright. I had never really played live regularly before that so this was a big deal for me. I was terrified but the warmth and hospitality of the staff and the other songwriters was so strong. Every week, I would get up and play and, every week, it would get a little easier.

I have also had the good fortune to join Songwriters’ Unite, a strong and friendly group in my city, which has led to amazing gigs at places like Graffiti’s in Toronto’s well-known Kensington Market. Because Toronto is big it also has a chapter of Nashville’s Songwriters Association, (NSAI), and that connection opened up doors to my playing places like The Black Swan.

On the studio front, I am lucky I have a producer who only is an hour from where I live with a world-class production facility. He’s a one-stop A-Z song shop, getting songs radio ready from co-writing to playing to engineering, mixing, and mastering…plus I get free studio time! This is because my brother is my producer!

I hope I give back to my great city honesty, truth and emotion through my songs.

Is music coming as a satori in your life?

Yes, music is my satori – my enlightenment. In fact, it is one if the few things in this world I am sure I am meant to do.

You ended up your studies and started as songwriter….

You are right, I have completed a lot of schooling … almost as much as a person can do in one subject – economics. In fact, I thought I would end up being a professor. I taught a couple of courses at university but that path was not meant to be. One rainy night, I was doing economics research in my tiny flat in Russell Square, London, U.K., and, instead of reading more on growth theory, I started writing lyrics to a love song. Then, I sheepishly took those lyrics back to my brother in Canada and he looked it over and thought we could do something with it. That’s when “Unintentionally” was born. My brother added music and it became the first song on my first studio album. I haven’t looked back since.

And you love to dance as well…

And, yes, dancing is also a passion as you saw first-hand at that crazy night we had on that magic Venetian island (Giudecca, note of the editor) at the youth hostel! I wanted to be a dancer when I was little and I’d make up dance steps on my own but I never got any training in dance. A ballerina once told me I was too tall to be a dancer and I think that affected my confidence in dance. In contrast, my brother and I took years of guitar lessons while growing up in Winnipeg. I think my love of dance is related to my love of music – when I hear a good song, I can’t help but move to it.

Is your nickname somehow related to the balance any human being has to apply each single second between disasters and joys?

Wow. You ask an interesting and deep question about my nickname. It’s not really about balance. The story is really that my mother, being a “crazy” poet and writer, nick-named me Smudgie from the first moment she held me in her arms. The idea is that as the first-born, she thought of me as a “smudge” of life created by the magical blend of sperm and egg. All my close friends call me Smudge or Smudgie – some don’t even know my real name (Antonia)! I am sure my nickname brings me luck.

What rests apart a smudge of our print in this world?

I think what sets my name apart is the fact that it means “life” in a biological sense and I think that’s kind of cool…it’s the ultimate form of energy.

Which is the kind of encounters you have in your daily life as economics expert and those when you perform?

In economics, I do some number-crunching (cost-benefit analysis etc.) and policy research and writing. I am currently consulting for an AIDS organization in Toronto and I enjoy it because it helps humanity on one of the most basic levels: public health. It is very different from music because it is pretty much mostly left-brain analysis, in contrast to music which is more right-brain thinking. However, perhaps there does exist that “math-music connection” people talk about.

My favorite food and drink…hmmm…crepes and Guinness.

What music (apart yours you’re editing for the second album) ‘you listen to and what book are you reading at the moment?

I listen to all kinds of music. I love too much music and I post a lot of my favorite songs and videos online as anyone who knows me knows…I’m just plain music greedy!

Most recently, I’ve gotten into the group “Dirty Loops”- the stuff I’ve heard from them is the most unusual “jazzified” pop and they execute it brilliantly. What a gifted set of guys they are!

Right now, I’m reading “The Warren Buffet Way” which is about America’s second richest man (at least at the moment). My interest in economics/business is very much alive. It fascinates me the way, economic and financial systems – and, more broadly – the way power systems, in society, work.

I’d say as a strength, I think I am pretty good at coming up with ideas but sometimes that ability can pull me in too many directions.

Wow. Another big and interesting question: I have learnt that life can be difficult, that it’s not always fair but that it’s important to seek justice, when possible. I have also learnt that you have to seize the day and have fun because the time we have on this tiny, spinning, fragile, blue, ball is fleeting.