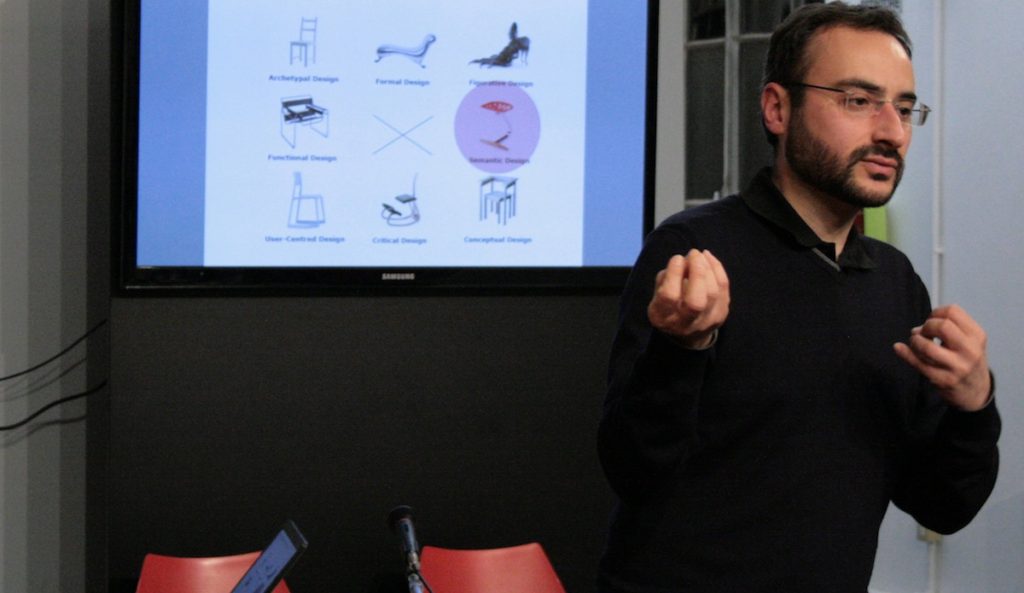 I was born in Forlì, a little city half way between a non-deep sea and a non-high mountain, such a nice a place to live that you could spend there a whole lifetime without realize it. Once taken a degree in design, and one in philosophy, I moved to Milan, where I currently live and work in “design discourse”, that is to say I write, teach, make trend research, and consult in design culture.

Writing, researching, consulting, interpreting, teaching: all these practices are composing your activity as critic and lecturer dealing with semiotics, design and beyond. Words for you are absolutely not a mere title for objects…

According to the French philosopher Gilles Deleuze the task of philosophy consists in creating concepts – carving, moulding, forging concepts. Words scaffold our thoughts, and in doing so they give them a shape, that is to say they are what turn vague ideas into proper concepts. As a theoretician, you work with words just like a sculptor works with chisels and hammers. Besides that, design too is all about carving, moulding, and forging “material” concepts, where philosophy does the same with the “immaterial” concepts. Both of them “outlined” our lives, they together mark the edge of human culture. That’s why I’ve been dealing with both all along my studies as well as my professional career.

What about the power of tradition, its noise and its resistance, against the ‘new’ in furniture design?

With some good exceptions, in Italy the so-called “power of tradition” accounts for the inertia in research. As a comparison, in some places abroad, where you don’t have as much a heavy burden to carry along, you can probe farther into the future. Mind you, I’m very interested in the philosophically and artistically rich tradition of Italian design, but today we’re living through a turning point in the history of design where you need to take that tradition into a new world, where a digital quality will add to the traditional qualities of form and function. We are indeed at a new beginning of the history of design, and the sooner you realize it, the better for design.

Which is the most relevant branch to be investigated today to better serve citizens: public realm, service, interaction, semiotics?

Serving citizens is important, but serving human beings is all the more so. In the Eighties, design theorists like Andrea Branzi introduced anthropology to design culture, because of the anthropological dimension they uncovered even in industrial objects. That was a important leap in design culture. Today, as we are in the new beginning of design history I mentioned above, I’d suggest that a discipline like cognitive semiotics (as a branch overlapping cognitive science and cultural anthropology) is bound to become the epoch-defining contribution to design culture. The epoch we’ve just entered will see design being digital and physical at the same time. Useful objects will no longer embed an interface – they will be connected snippets of a physical, distributed interface themselves. You will be no longer staring at icons on a screen: you will seat over them, grip them, move them around. They will support both your body and your mind, with their form, function, and digital quality. Design culture (which includes designers as well as theoreticians) is called in to think up and design such a distributed interface, what they can do only though a cognitive-semiotics-laden approach to objects’ aesthetic, which will be delivering, better still embodying tangible information. Data will need to be aesthetically gentle and meaningful to all our senses as they will be “furnishing” our daily life.

Which is the most important achievement after you started to work in your various professional activities?

Probably, my profession as a whole. I mean, I built my job chunk by chunk, adding them on the base of their consistency with the core of my work, i.e. understanding, and trying to dig out, “meaningful aesthetics” in our surrounding. Sometimes I feel like a singer who works with different bands each having their own sound, but all attributable to a “meta-sound” underpinning their inherent continuity. I hold onto the meta-sound.

Speaking about singers partaking in different bands – I like most of the things Mike Patton does, ranging from his first, genially-crazy, plastically-experimental band Mr. Bungle, up to his most famous role as the frontman of Faith No More. I keep them in my phone as well as in the MP3 reader I take with me while running. I also used to listen to the Italian songwriter Fabrizio de André, whose songs are actual lay prayers: the only kind an atheist may listen to. In books, I started off with the real powerful reads during high school, when the literature teacher told us that we should not read Nietzsche’s and Freud’s because they were too difficult to understand. The same day I bought books of them both and spent the subsequent months reading through most of their works. Coming from Nietzsche and Freud, you necessarily end up by reading the great European narrative, the likes of Thomas Mann, Céline, Musil, etc. Then I moved back to philosophy, especially phenomenology and philosophy of language, mainly Wittgenstein. In the last years I’ve reading science and history of science; more recently, cognitive science (which, together with particle physics, will define our time like thermodynamic defined the Ninetieth century). That said, having one foot in the analogical past and one in the digital future (I belong to the bridge generation), I keep some books in the bookshelves and some in my phone. None of them, though, in the side table: interesting readings keep you up, so what I read before sleeping are simple, mind-relaxing things like comics, which I read over and over because the more the boredom, the better to fade into sleep.

I walk, and run. Without phone (these days you need to actively carve out your off-line space, it’s no longer a given). Sometimes I go for very long runs, like marathons and even longer ones. Running is just running, there’s no added meaning on it. If you’d charge a “meaning” on it, you’ll turn out to ruin it. It’s a meaning-free (not -less) time. Giving a meaning to your run would be like giving a price to a present – it would waste it. Indeed, I work all the time with meanings, so sometimes I do want to get rid of them. It’s a gravity-free experience.

Stefano Caggiano is author of Design Languages – The Aesthetic and Meaning of Objects in Contemporary Culture, 2015