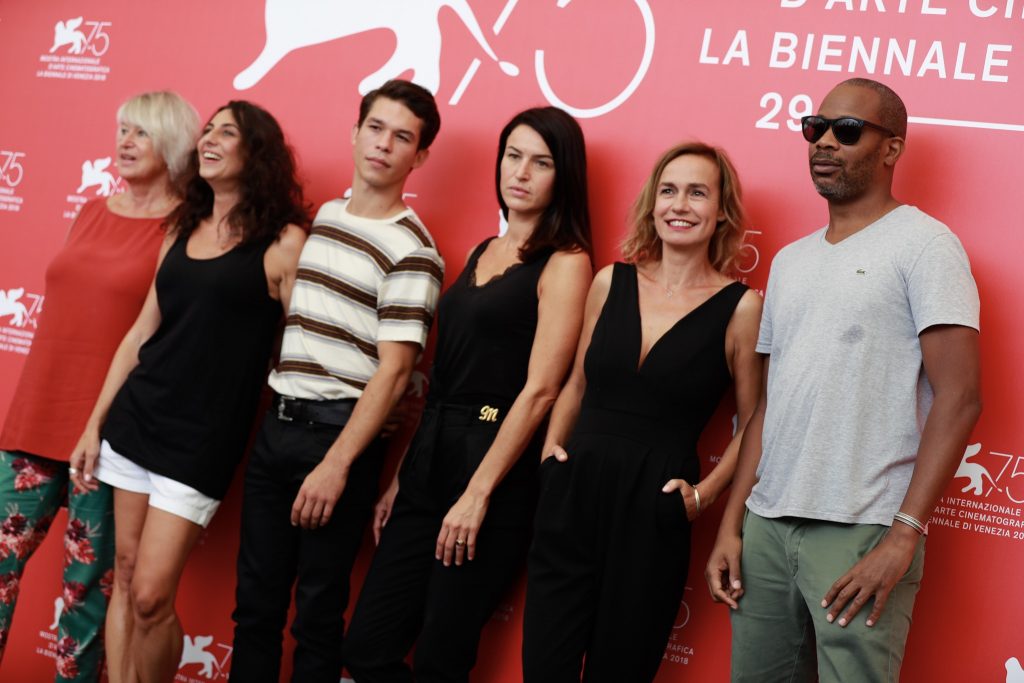 We continue to dig and to describe the female ‘touch’ in writing for cinema. After having interviewed the Syrian Soudade Kaadan and the French Maud Ameline in our past weeklies, #slowwords is happy to introduce you today a French director and a scenarist, Sarah Marx (pictured in the centre), who broke the mould with her first movie, L’Enkas.

She had written it with two well-known rappers: the movie unfolds the story of Ulysses once he gets out of jail and need to deal with the mental illness of his mother, Gabrielle. He needs to quickly cash a lot of money in order to pay a 24/7 caregiver and being able himself to get a full time job: no social assistance is helping in France in these cases, unless he would internate Gabrielle in an asylum.

The camera, and the very unique writing, follows Ulysses in a poetic yet crude horizontal perspective, because Sarah’s first long métrage is a perfect essay of what cinema has to be for her.

I’ve always sought to lend a voice, advocate and raise awareness for those who lack an adequate platform. I was 15 when I first took a camera to interview my family, looking for tales about my grand mother who had just passed away. After studying history, geopolitics and interning at multiple press agencies, I directed pop culture videos. While directing hip hop music videos, I also trained on various sets to understand all the steps involved in making a movie. Then a short film, “Fatum” in which the hero also gets out of jail and tries to reintegrate society. Inequality of chances, imprisonment and reintegration failure, lead me to direct a documentary within the prison of Nanterre. I followed, day after day, 8 convicts on a theater workshop during a year.

What means for you a ‘necessary’ movie (can you give me an example?) and which is the state of art of the movie industry in France from the view point of ‘engaged’ movies as L‘Enkas (it seems to us in very good health but I wish to focus especially on the kind of movies as yours)?

A necessary movie is authentic, as real as your character’s life, without bells and whistles. A cinema that asks questions is the one that I defend and try to make. L’Enkas asks essential questions and create empathy with its characters. With L’Enkas I want the audience to be in Ulysses shoes by the time the movie ends. It’s a slice of life movie filmed trough a humane lens that promotes damaged heroes. That’s what is necessary to me: tell the story of the ones we usually don’t look at.

Can you tell me more about your role as director but also of a very special scenarist and the way you developed your original script with the rappers’ co-author?

L’Enkas, developed also via a workshop in a jail, got a fantastic reception in Venice either in the audience and in the critic milieu.

As told, Inequality of chances, imprisonment and reintegration failure, lead me to direct a documentary within the prison of Nanterre. I followed, day after day, 8 convicts on a theater workshop during a year.

I’ve spent 8 month, 4 days a week inside Nanterre’s prison and my encounters have profoundly shaken me. I’ve tried to show fragments of their invisible life.

Six hands co-wrote the story line, the characters, their dynamic and their fights.

The goal was to weave a complex but realistic familial and social net, tinged with melancholia, urgency, social uncertainty, dirty tricks, illusions and easy money.

We wanted to tell a story through a human lens, closer to people who hope to taste what life has good to offer.

My work as a director on L’Enkas started the day I wrote the first sentence. I put myself in the character’s shoes from that moment until the movie was edited.

To put words into Ulysses’ mouth, I needed to meet the one who would embody the character. When I met Sandor Funtek, I found my Ulysses. He has this natural strength and delicacy found in the character. While writing I pictured Sandor walking through the set: it was him, without a doubt.

Directing a movie is feeling the souls of your characters and never put yourself in distance. On a set, you live your movie, you feel it, hear it. I gave the actors a part of freedom within a precise context, hence my choice of sequence shot.

I shot L’Enkas in the direct continuity of the writing. I chose an adaptable and smooth way of shooting: hand-held camera, natural light and natural scenery emphasizing long takes and sequence shots. Actors were giving a part of liberty in a precise context. (Tu te répète là) It was essential to let spontaneity and accidents happen.

I’m a hungry reader. My reading keeps me informed and feeds my imagination. As for the music, it’s my first inspiration. I grew up in the 90’ with hip hop music. Listening to a track fuels the mind and body. Every morning, on my way to the set I listened to a playlist; spanning from mobb deep (an American hip hop duo) to Wendy René (a soul singsong writer and singer whose real name was Mary Frierson Cross). Cinema is the same, you have to connect with your characters 100%.

I’m an epicurean at heart who loves to eat. Taste follows my daily mood. It’s as if you asked what my favorite movie is: as soon as I’ve found one, another one pops in my mind. But to answer your question, right now I’d pick parmigiana as my favorite dish.

This one is too introspective and hard to answer. I’m passionate about people and their stories if you could consider that a talent. When it comes to what I miss, it’s a never ending list and you would run out of pages.

Life has more imagination that I do.